END_OF_DOCUMENT_TOKEN_TO_BE_REPLACED

Gold and Silver Prices have retreated sharply. Does it change the long-term view...?

WE'VE TAKEN the last few days to watch developments in all the various gold and Silvr Prices charts, indices, ratios and the trading in the gold and silver futures markets, writes Gene Arensberg for his GotGoldReport subscribers.

Like everyone else in the gold and silver markets, we are trying to decide whether the early year profit-taking will remain dominant or if demand will once again ramp higher and overwhelm it.

Our instinct, which we shared with Vultures in last Sunday's full Got Gold Report, is that we are due for a corrective phase for gold and silver. But we have to admit that our confidence in that assessment is not absolute. It's yet another reason we Vultures use trading stops in our short-term positioning rather than attempting to divine market tops.

If the more vigorous pullback or correction we expect doesn't materialize, then by golly we want to be on board for the ride higher. And if it does, then our stops will come into play and we can haul to the sidelines to safely ponder where to reenter. That of course presumes that we will maintain our overall bullish outlook for precious metals longer term. As of now we see nothing that threatens that long-term view. 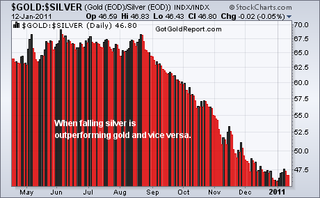 We pay a good deal of attention to the gold/silver ratio. We think that since silver normally magnifies the movement of gold in both directions, it is a helpful barometer. Typically when the GSR is trending lower it is a more bullish than bearish sign and vice versa.

Well, we are seeing a bounce in the GSR, but dang it all, it isn't all that much of one. Not yet at least.

If the bounce was more convincing it might allow us to take a more decisive view on the pullback issue. We have to remember that Silver Bullion has been the source of much commentary regarding tight supplies in the commercial silver markets of late, so can we expect it to perform as it usually does?

We think we probably can rely on silver to maintain its hyper-relationship to Gold Prices for the time being, but at some point if the scarcity issue becomes dominant again it could very well decouple from gold for a time. For now, the GSR is merely ticking a little higher, but it is not yet signaling a larger correction.

What about the miners? Well, one of our most important indicators is the relationship between the smaller, more speculative miners and explorers to the larger companies. We think that this ratio is a good barometer because when confidence for higher precious metals prices is strong, there is considerably more positive money flow into the more speculative junior miners and vice versa.

Just below is a look at the Market Vectors Junior Gold Miner Index (NYSE AMEX:GDXJ) compared to the AMEX Gold Bugs Index (NYSE:HUI) in terms of performance. 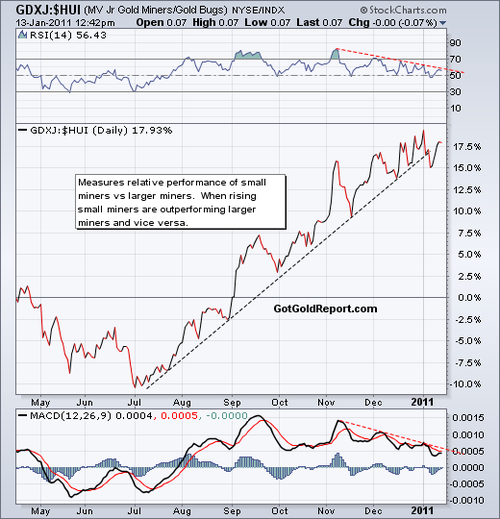 From July until December the trend was crystal clear and it was nothing but up. Just recently this indicator has moved sideways and the momentum indicators show a clear negative divergence. That suggests at least a pause in investor confidence in the smaller juniors, but it does not yet "prove" that confidence is descending.

Just below is a similar chart for the Canadian Venture Exchange relative to the HUI. It has yet to show any "fear" or indecision at all in contrast to the GDXJ/HUI chart. 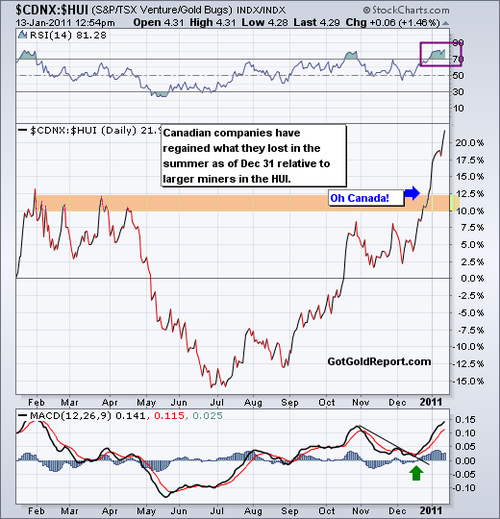 If that was the only chart we had to review we would have to conclude that investors are still very strongly bullish on metals and highly confident for the small companies that mine and hunt for them.

For reference, just below is the CDNX by itself. 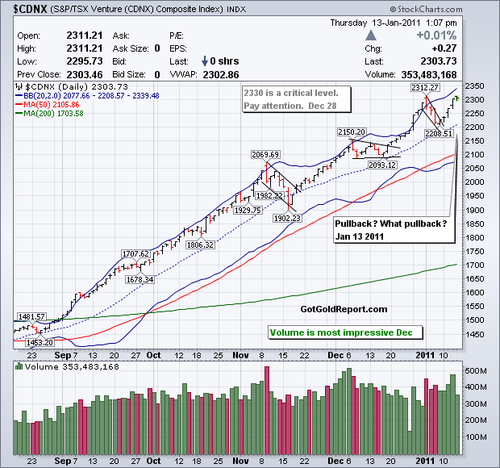 What can we say, except that if we are about to enter the corrective phase we expected, it just is not yet showing up north of the 48th parallel.

With that "evidence" in hand, why are we expecting a more vigorous bout of profit taking just ahead? Well for two main reasons. The first is that gold and silver "seem" tired to us here at Got Gold Report. Like they need to recharge their batteries, flush out some more of the late longs, restore some healthy "fear" to the markets and so on. Secondly, the charts show nagging signs of pending weakness. Consider the silver chart just below as one example. 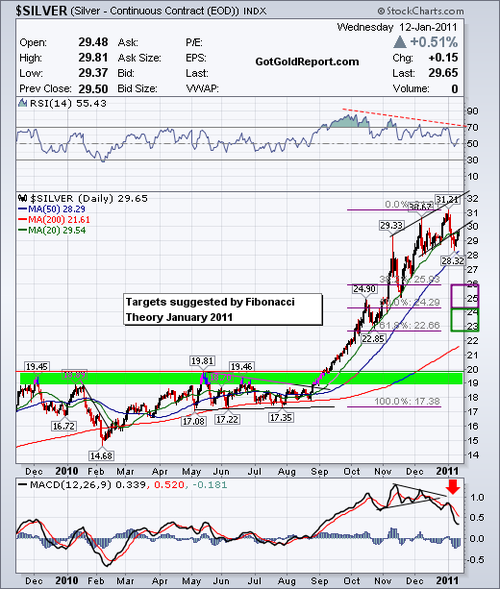 We cannot help but notice what we would call a "high-consolidation-break" (HCB) that is currently in the process of retesting the break from below. Right here is where the theory is tested. If this is indeed a HCB, then the current rally will fail below $30, turn over and continue lower to test a new, lower low.

This chart is similar to one we shared this past weekend with GotGoldReport subscribers. It shows suggested Fibonacci retrace zones, which is as good a guess as to where silver might find future support as any at this early stage in the "maybe" pullback.

We are merely mentioning it, not predicting it as of today. Silver has neither broken convincingly nor negated its bullish chart, but the signs do argue it has become a bit more likely just ahead. We have to expect pullbacks and corrections in this secular bull market, don't we?

Aye, but there are also too many bullish forces at play in the world for gold and silver to arrogantly presume that one can bet against this very powerful bull market. Betting against gold and Silver Bullion is the same thing as betting with fiat currencies and the governments that print them, is it not? Do we have to point out that the central banks themselves – as a group – are buyers at the margin for gold? Do we have to point out that there is a commercial shortage of physical silver bars going on? (Please recite all the other bullish forces at play here.)

Reality is so simple sometimes, but we humans seem to like things to be complicated. The reality is that if more wealth enters than exits gold and silver just ahead they will rise in price and vice versa. On a short-term basis that – positive or negative money flow – is really all that matters.

We are not saying, "Hang the fundamentals." We are not suggesting that demand won't be higher for gold and silver later on this quarter and later on this year. We are convinced to the contrary. But short-term the markets are pure creatures of positive and negative money flow. Our job as traders is to recognize that and to position accordingly, taking risk only when it suits us and only when the odds clearly favor taking that risk.

Did we mention that, for our short-term trading capital, we use trading stops instead of trying to pick market tops? The above considerations and deliberations are yet another reason why. We can also take a look at the various ways of hedging our long positioning at times like these. Premiums for most puts [the right to sell at a pre-agreed price in the future] seem fairly rich to us at the moment, but not prohibitively so. If worried that gold and silver are about to be hammered, one can use the popular double-short ETFs with any margin account and achieve enough of a hedge to remain comfortable, and so on...

We'll just stick to our trading stops and go fishing if the sell down does arrive. That and put the Bargain War Chest we raised in November and December to work PDQ. We love buying bargains, don't you?