END_OF_DOCUMENT_TOKEN_TO_BE_REPLACED

DON'T BE SCARED by last week's sell-off in gold, writes Addison Wiggin in the Daily Reckoning.

"What got sold?" ask our analyst Byron King. "Do you really think that people parted with their Gold Eagles, Maple Leafs and Krugerrands? Did YOU sell off YOUR gold? Do you think that the Chinese sold gold from their national vaults?

"No, last week people sold paper, not real goods. Sure, it felt like a sell-off to your portfolio, when gold miners declined. But beware thinking that we're about to experience the Great Reversal in values for precious metals.

"For example, the world Gold Mining industry is galloping, but only to maintain a slow overall annual decline in total output. Here's a chart that goes back over 30 years. It's clear that gold output from South Africa is steadily falling... 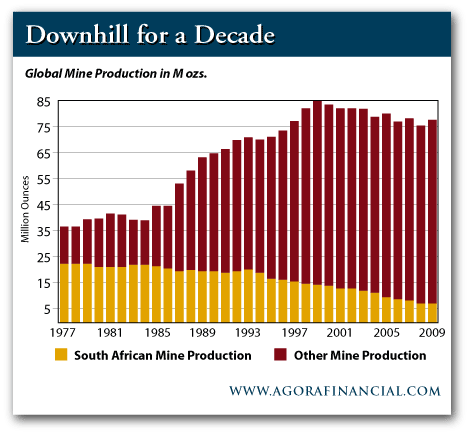 "I've discussed before how the South African mines are, overall, getting so deep, hot and dangerous that we're on the edge of a major rapid decline in gold output.

"And notice that in the past decade, gold output from the rest of the world has just not picked up the slack. Sure, there have been some great investment, growth and production stories. I cannot fault the miners that are out there, digging away.

"But looking at the overall picture, total world gold output has decreased by 1 million ounces annually since 2001. Meanwhile, the US Dollar is declining in value. Peak Gold, anyone?"

That's a gold story no one's talking about. What do we hear from the mainstream, instead? The mainstream says John Paulson, after making a killing shorting subprime in 2007-08, has blown it with his move into Gold Investment.

The Wall Street Journal could barely contain its glee (headline: "Midas Touch Lost?") as it reported Paulson's new gold-oriented hedge fund has raised only $90 million or so on top of the $250 million Paulson himself is kicking in. And...horror of horrors...the fund is down 10% since it opened on Jan. 1.

Mainstream skepticism abounds, in other words. Hardly the stuff of a top in the market.

How best to Buy Gold – making it secure but low-cost today? "BullionVault in the No.1!" says German advisory Kapital & Steuern. Find out why for yourself at BullionVault here...