END_OF_DOCUMENT_TOKEN_TO_BE_REPLACED

THERE ARE two contrasting potential outcomes from the European sovereign debt crisis, both of which have major implications for Gold Prices, writes Sumit Roy for Hard Assets Investor.

And as if Europe's sovereign debt worries weren't enough, US debt worries resurfaced this week. The congressional debt committee that was formed during a last-minute compromise to raise the debt ceiling back in August — and which was charged with finding between $1.2 trillion and $1.5 trillion in budget savings — failed to reach a bipartisan compromise.

The deadline is Thanksgiving, but sources suggest that the partisan divide will not be overcome by then. Without a deal, $1.2 trillion in automatic spending cuts, evenly divided between defense and nondefense spending, will go into effect at the start of 2013. The repeated failure of the US government to address the country's spiraling debt load has renewed credit-rating-downgrade fears and weighed on market confidence.

While sentiment has been negatively impacted by this second US debt debacle, the impact on financial markets in the short term will be minimal. US Treasury yields are near record lows as investors still consider the debt of the world's largest economy a safe haven, particularly relatively to Europe.

Indeed, investors' major concern remains the sovereign debt crisis in Europe, which continues to escalate. The two countries in focus, Italy and Spain, have both seen their borrowing costs stay at near-record levels at just under the critical 7 percent level despite the formation of new governments. 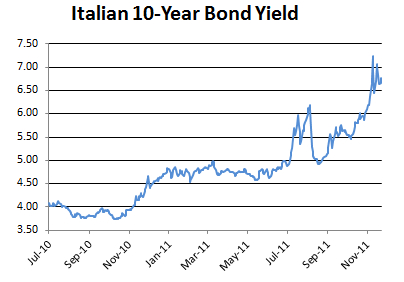 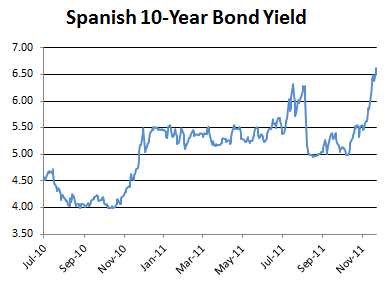 Meanwhile, the European Central Bank purchased another €7.9 billion worth of sovereign bonds last week, up from €4.5 billion the week before. That brings the ECB's total purchases in its Securities Market program to €122.8 billion since the central bank resumed its buying back in August. Those purchases have primarily consisted of Italian and Spanish bonds. 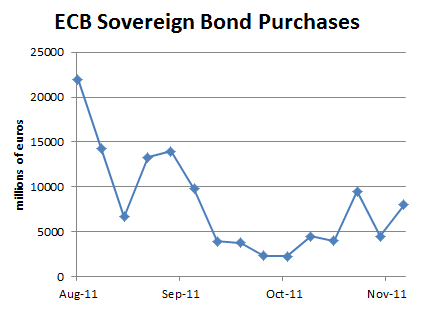 As the potential for a catastrophic default and breakup of the Eurozone grows, an increasing number of people are calling for the ECB to significantly increase its purchases to staunch the bleeding in debt markets and perhaps solve the crisis once and for all.

The central bank has so far refrained from getting more involved, saying that such action would be illegal and go against its sole mandate of price stability. The influential German government shares this view.

Some believe that the ECB and the Germans will be forced to reverse their stances as the possibility of a breakup of the Eurozone becomes more apparent. Ironically, such a breakup would likely be the end of the ECB. Thus, the survival of the institution may hinge on whether it takes more decisive action or not.

Nevertheless, there is no free lunch. More vigorous action would likely take the form of a quantitative-easing program, much like that of the Fed in the US and would potentially stoke inflation.

Moreover, ECB purchases of Italian and Spanish bonds are essentially subsidies—transfers of wealth from other Eurozone members to those countries. Perhaps the central bank could purchase bonds of all members proportionally to avoid this, but in any case, if the ECB gets more involved in the sovereign debt crisis, it would likely spell a substantial quantitative-easing program in hundreds of billions of Euros.

Such large-scale intervention would certainly bring down borrowing costs for Italy and Spain, but at the expense of the ECB's inflation-fighting credibility. Risk asset prices would likely surge, with precious metals such as gold leading the charge as an inflation hedge.

The alternative scenario is much more dire. But a growing number of market observers are suggesting that the Eurozone is a flawed union and that its demise is inevitable. If so, risk assets will suffer significantly in the transition period.

There is quite a dichotomy between these two potential outcomes for Europe. That contrast was evident in the gold market as well last week. On the one hand, gold ETF holdings surged to a fresh record high near 75.3 million troy ounces. But Gold Prices plunged below $1700/oz. 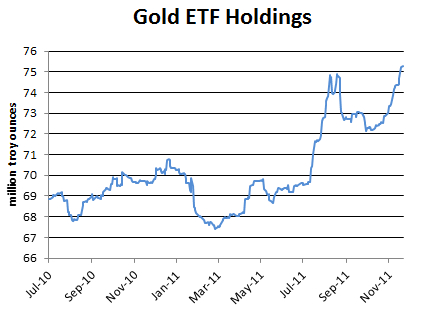 The increase in gold ETF holdings indicates that at least one segment of gold investors are very bullish on the metal. But clearly not everyone is convinced that the events in Europe will benefit the metal, at least in the short term.

We've maintained our view over the last several weeks; that is, gold may continue to fluctuate in the same direction as other risk assets, including stocks and other commodities. The yellow metal will not provide a safe haven against a negative financial shock in Europe in the short or medium term, and will likely fall significantly in the event of a major default on the continent. We expect that all risk assets would suffer from panic selling in such a scenario. 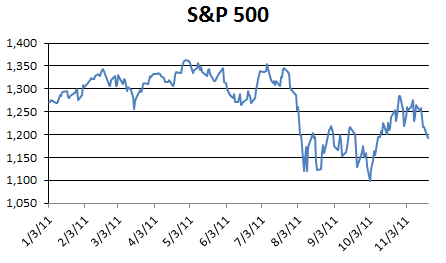 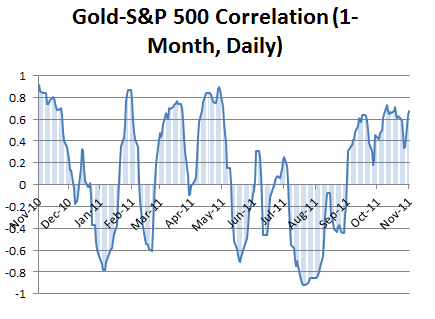 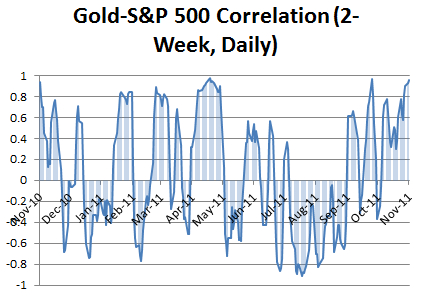 Incidentally, even under the bullish ECB-intervention scenario, gold's correlation with the S&P 500 would remain high as risk assets rallied across the board.

Going forward, precious metals investors should continue to closely eye the developments in Europe. As we do not foresee any immediate action by the ECB, prices may continue to decline toward the October lows, where initial support lies near $1600/oz.