END_OF_DOCUMENT_TOKEN_TO_BE_REPLACED

WE ARE now a decade into the current bull market in gold. Enquiring minds gathered here in Montreal (along with a good number of traders, too) are asking how did we get here? What's driving the Gold Prices higher? And how much further might we still go? writes BullionVault's Adrian Ash from Canada.

"History [is] a guide to the future," said Pierre Lassonde, chairman of the $5 billion Franco-Nevada Gold Corporation to the London Bullion Market Association's annual conference, here at Le Sheraton Hotel this week.

And on that basis, said the "living legend", Gold Prices look set to keep rising until – in comparison – the value of the US stock market has suffered another depressionary wipe-out. 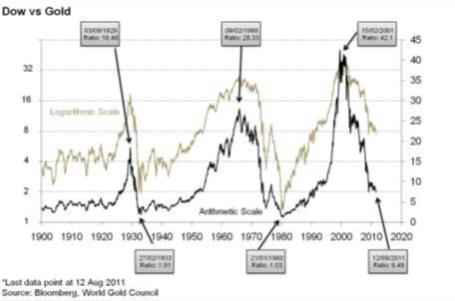 Yes, just as in the mid-1970s, "I think there's going to be a correction," said Lassonde, "to set up the last phase – the explosive phase" in Gold Prices.

But at the grand finale, "I think we're going back to parity with the Dow," Lassonde concluded his keynote speech at LBMA 2011, having explained that this measure – dividing the DJIA index of US stocks by the Dollar Gold Price – is a simple way of looking at the relationship between financial assets and hard assets such as gold.

"This bull market is far from over. It's got as much to go [in percentage terms] as it's already gone."

The logic of Lassonde's view was relentless. (Look out for the slides at the LBMA's site in the next couple of days.) Because since he spoke at the LBMA conference in Istanbul a decade ago, the market has changed beyond recognition:

These are "tectonic shifts", which in fact mask the real focus of Lassonde's utterly changed landscape. We'll have to wait until Tuesday morning for the inside scoop, but pretty much everyone I've bumped into (or met for the first time) so far is waiting most of all for tomorrow's session on the "Evolution of the Golden Giants", with the World Gold Council's Far East director Albert Cheng in the chair and speakers from China's ICBC – the world's biggest bank – as well as strategic consultants OC&C speaking on "increasing Chinese consumerism and the propensity to save".

This story – Asian demand – matters more than Western-centric investment analysis right now, certainly to delegates of LBMA 2011. As Lassonde pointed out, demand from emerging Asia has more than made up for the collapse of jewelry sales in the developed West as prices have risen. India and China are increasingly dominant, in fact, as a neat little chart Lassonde flashed up proved. It contrasted the last decade's rise from 800 to 1,100 tonnes for annual Chinese and Indian demand with the felling of US and European jewelry buying, down by two-thirds to below 200 tonnes in 2010.

Moreover, Asia and other emerging nations are set to increase their official gold ownership, Lassonde explained. Currently, on his maths, the real tiger economies (China, India, Thailand, Indonesia) plus the developed Asian states of Japan and South Korea hold just 2.6% of their total foreign exchange reserves in gold bullion. Raising that to, say, 15% gold – a moderate level compared to the US and Western Europe – would take another 14,000 tonnes or so. That's equal to more than five-and-a-half-years of global mine output. "Any significant retrenchment in Gold Prices will be seen as an opportunity to build gold reserves."

Amongst Western gold investment, and noting the rising allocations to exchange-traded gold trusts (ETFs), "Gold is fulfilling its role as a global currency" said Lassonde. But gold investment – whether in coin, bar or trust funds – still accounts for less than 1% of global financial assets, he added. If gold investment holdings represented 5% of global assets, his chart showed, they would total 162,565 tonnes or $6.4 trillion.

So what of supply? Gold mining production growth is likely to remain constrained, not least because new "elephant find" are still entirely absent. Despite a quadrupling of exploration budgets since 2001, the rate of discovery has collapsed, Lassonde pointed out, with 2010 uncovering less than 300 tonnes in major finds versus over 2,000 tonnes a decade before. The last "super deposit" of 1500 tonnes was found in 1991.

Of course, Lassonde knows a thing or two about Gold Mining. Co-founder in 1982 of Franco-Nevada Mining, his company gave its shareholders an annualized 36% rate of return until 2002, when it was bought by Newmont – then the world's second largest Gold Mining equity, of which Lassonde also became president and vice-chairman. Chairman too of market-development group the World Gold Council from 2005 to 2009 – when its exchange-traded gold trust initiatives really took off – Lassonde then re-floated Franco-Nevada for $1.2 billion in 2008. Its market-price now values it at more than $5bn.

And of course, he was famously "unhedged" even when all his competitors were selling their future production during the 1990s bear market, capturing current prices for fear that gold would only fall further by the time they got those ounces out of the ground.

"We all know which company had to do a $5 billion stock issue to buy back its hedge book," said Lassonde, referring to the world's largest Gold Mining firm, Barrick. "And a good job too, because at today's price it would cost them $10 billion."

It's odd, though. With the global hedge book now entirely bought back – and with no major Gold Mining firm daring to annoy its shareholders by grabbing today's $1800 price tag while they can – the price of their stock is failing to beat the price of gold itself. Surely management could expect stronger investment flows to their equity now that it's completely exposed to the bull market, rather than hurt by it. One reason, as CIBC economist and managing director Avery Shenfeld pointed out, is that – thanks to the repeated losses inflicted on Western shareholders since the start of gold's bull market – "The people Buying Gold hate equities," so they won't even buy equities related to gold. The second, according to Lassonde, is that to drag Gold Mining output back up to 2001's peak in 2010, they've had to drop the ore grades they mine, and let costs go up too.

Newmont's stock price, for instance, is the same today as it was in 2004. But the rock it's mining has gone from 1.5 grams per tonne to 0.8g/t, and "everything costs more."

Looking ahead, the potential for new hedging by the world's gold miners looks "unattractive". Nobody here in Montreal – and certainly not any of the speakers on Monday morning – expect US and other Western interest rates to rise from near-zero anytime soon. So there's no imperative for the mining companies to raise cash to help service their debts.

So what everyone here wants to know is, just how big is that Asian demand which Gold Mining output can't rise to meet?

Looking to Buy Gold at the lowest possible prices?...