END_OF_DOCUMENT_TOKEN_TO_BE_REPLACED

See the average shape of the Gold Price as it moves from summer lull to autumn boom...

THE SHARP DROP in world Gold Prices starting in late July has now knocked the cost of physical metal almost 25% off its record top of mid-March.

That level – just around $750 per ounce – also happens to sit right where the uptrend starting in Sept. 2005 now lies. Meaning, for technical analysts at least, either a test (and perhaps collapse) of the bull market...or a screaming opportunity to Buy Gold on the cheap.

Whichever way prices now move from here, however, it's worth considering the typical shape of a year in the life of the Gold Market. 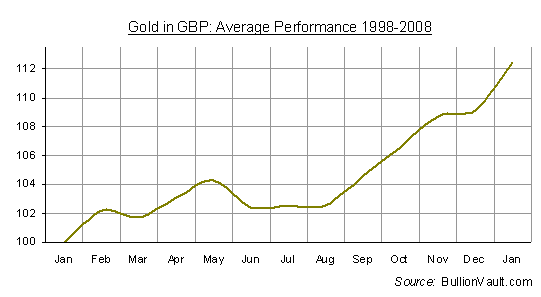 As this chart shows – swapping the Dollar for British Pounds Sterling, to remove the impact of the Dollar's 30% drop on the foreign exchanges – the past 10 years have seen the Gold Price follow a clear and regular pattern.

There have been exceptions, of course – most notably 2003 and 2006 – when the "summer lull" that followed a sharp rise failed to match those high prices again by late-autumn.

But in the main, and with a near-tedious rhythm, the price of Gold has risen in spring, slipped back or steadied in summer, and then enjoyed very much sharper gains once more, before the next year really gets started. This pattern holds true, but with a greater accent on the summer lull, for the entire post-Gold Standard period starting in 1971.

FULL DISCLOSURE: There are no guarantees this shape could be repeated this year. With the Gold Price falling so far, so fast, from its recent all-time record highs, sentiment amongst professional and institutional traders has clearly turned against the metal.

Gold Buying by the world's No.1 buyers, meantime, has indeed collapsed, with imports to India dropping by 47% in the first half of 2008 from the same period last year. Indian gold buyers tend to account for the surge in physical buying seen during the autumn, as their festival season culminates in Diwali, the "festival of lights".

Diwali falls at the end of October this year. Reports out of India say the recent sharp falls in Gold Prices has already led to strong investment and jewelry demand. And here in the West, the economic background remains very bullish for Gold – at least according to history.

US interest rates now lag inflation in the cost of living by more than 3%. A mountain of leveraged debt still teeters above Manhattan and the City of London. Government debt is rising worldwide, with a true "monetization" of bad loans at Freddie Mac and Fannie Mae now only a few weeks or months away.

If you thought about Buying Gold but were deterred by this spring's sudden high prices, it may be worth noting that the Case for Gold remains as it was. Too much debt, plus too much inflation, threatens to destroy the value of savings and wealth held in paper (whether in bonds, cash or equities). Physical gold, in sharp contrast, cannot be created at will. Owned outright – in your name alone – it's also no one else's liability or promise to pay.

Professional gold bars, stored securely and at very low cost in – say – Zurich, Switzerland, also represent one of the world's deepest and most liquid capital markets. That's simply not true of Gold Coins.