END_OF_DOCUMENT_TOKEN_TO_BE_REPLACED

SO IS THE CREDIT CRISIS over?

One clue comes from the inter-bank lending market, and the interest rates that banks charge for lending money to each other.

Commonly known as LIBOR (the "London interbank offered rate" – London still being capital of the world's money markets), the interbank rates say the credit crisis is over, according to our colleague Steve Sjuggerud.

How does he know? The rate banks charge each other for overnight loans has gone down, notes Steve, and even briefly went under the Fed funds target rate last week.

If that trend holds, it would be a sign that the crisis in confidence in the banking sector is easing. Banks in Europe and America have taken substantial losses both in their proprietary trading departments and in their loan portfolios.

They've had to go hat-in-hand to creditors (mostly Sovereign Wealth Funds) in the Middle East and Far East to recapitalize their balance sheets. 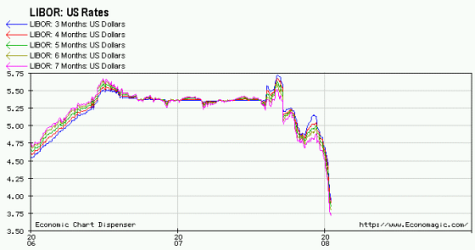 The Fed's extra-ordinary and historic rate cut of Tues 22 Jan. does seem to have loosened the purse strings in the financial sector. At least banks aren't putting up rates and defending their own capital.

So in the short term, Steve is probably right that the credit crisis is over and there is plenty of liquidity in the financial sector. But what exactly does that mean for equity markets and the economy?

If the credit crisis is over, it could mean banks are no longer worried about a "solvency crisis" either. Underlying the rise in inter- bank lending rates was a deep suspicion among financial firms that other firms were sitting on tens of billions in unrealized losses and over-valued assets. Most of those assets, of course, were bundles of sub-prime mortgages that banks and brokerages had either bought or underwritten.

So here's the question: Is the solvency crisis over now that the credit crisis has eased?

Having reported billions in losses in subprime mortgages, are the banks in the clear? Is it time to consider buying the financial sector, even as a trade?

Before you go rushing off to buy call options on a financial ETF, here are a few things to consider. First, Wall Street banks (and French, German, and British banks) have shown miserable risk management policies in the last five years. Here we have a French bank claiming a single trader hacked its systems and managed to lose $7.2 billion.

Where was the adult supervision? Where were the boards charged with protecting shareholder capital? Where were the masters of the universe this whole time? Do they all work for hedge funds? And most importantly, why should we assume that the financial sector's ability to manage risk has improved with billions in losses? Does shame make us more prudent?

The temptation to buy the banks for an expected earnings bounce is obvious. On a year-over-year basis, 2008's fourth quarter should look a lot better than 2007's fourth quarter. The banks should see a big earnings bounce. But you have to wonder who the banks will be lending to this year. Earnings will look comparatively better, yes. But absolutely, will the business of borrowing and lending money be as good as it was anytime soon?

This is the other factor affecting the long-term prospects of the financial sector. Money center banks and investment banks simply never had it so good as they did in the last ten years. We reckon they'll never have it so good again. The market for financial products is going to undergo a contraction. This means, we think, lower long-term profits for financial institutions.

Besides, if the banks were so bad at judging risk in the subprime market, how can we be sure they did any better in the option-ARM market, the credit default swap market, and the bond insurer market? "Bond insurer woes carry major risks for banks as well," reports CNNMoney.com.

Last week, American regulators tried to put together a bailout in which banks recapitalize the bond insurers and prevent a downgrade by the ratings agencies, which would in turn force the sale of billions in bonds held by institutions which can only buy AAA rated debt.

"If no new capital is forthcoming for bond insurers," CNN reports, 'lenders and other policyholders could end up swallowing heavy losses...Citigroup, Merrill Lynch, Bank of America and Wachovia  are among the most exposed."

Sound familiar? January 2008 has already been a memorable month, and it's not over yet. The last few days might offer a welcome respite from the credit crisis. But the unwinding of leverage and the deflating of the credit bubble is likely to continue, whether we like it or not.

And not everyone likes it, that's for sure. Hence the surging Gold Price.

The immediate cause of gold's latest surge has been the national electricity crisis in South Africa, the world's second-largest gold producer. "Several major mining companies, including AngloGold, Harmony and Gold Fields Ltd., suspended all but emergency operations at some of the world's largest mines because of a national electricity emergency", reports the Associated Press.

"Mining operations in the country were suspended Friday on fears that power interruptions would trap workers underground. Gold Fields said it halted all its South African operations, including in the world's largest gold mine, which produces 7,000 ounces per day…when adjusted for inflation, gold remains well below its all-time highs in 1980. An ounce of gold at $925 then would be worth about $2,360 today."

As it is, only gold bugs are choosing to Buy Gold right now – and they're buying it for the very same reasons we think financial stocks are a long way from safe. And for as long as the US Fed and its friends around the world choose to destroy money in the hope of supporting financial asset prices, Gold Prices look sure to keep rising.

The real bull market will start when dishwashers, taxi drivers, and Wayne Swan start talking about it. All the advice we have received suggests that by then gold will be a bubble.