END_OF_DOCUMENT_TOKEN_TO_BE_REPLACED

In answer to the "gold bubble" question, simply make like Gordon Gekko...

For a while there, things weren't looking too good for me or my appetite, as the US-Dollar Gold Price plunged off its December highs like a diver in free fall. The metal scraped as low as $1052 early in Feb., but as gold closed the month above $1117 on Friday, I'm happy to say that I might just get my dead cow after all.

Of course, renewed strength in the Gold Price means a revival of the Big Question from last fall: Is gold in a bubble? This time, however, it seems the answer on everyone's lips is: "Who cares?"

"I absolutely believe [gold's] heading into a bubble, but that's why you buy it," Charles Morris, manager of HSBC Global Asset Management's $2.5 billion Absolute Return Fund, told Bloomberg earlier this week. And after predicting that gold could hit as high as $5000 an ounce in the next five years, he added, with shades of Gordon Gekko, "A bubble is good."

Granted, most of that was driven by outsized buying in the first quarter of '09, as investors – smarting from the 2008 financial crisis, and with world equities sinking to 12-year lows – fled perilous markets into supposed safe haven assets like gold.

Still, ETF buying has remained brisk, with demand in Q4 2009 hitting 31.6 tonnes. Most of that demand has gravitated toward the SPDR Gold Trust listed in New York, the world's biggest bullion-backed ETF and the second-largest ETF overall. Investors big and small piled into GLD last year, which saw $13.8 billion in new net investment dollars in 2009. The fund now sits at over $35.4 billion in assets under management.

Even noted gold skeptics now want a piece of the action. Famed hedge fund manager George Soros – who not too long ago dubbed Gold the "Ultimate Bubble" – had only just increased his GLD holdings before those comments made the headlines. In the fourth quarter of last year alone, Soros Fund Management bumped its holdings in GLD by 152%.

According to Bloomberg data, as of Dec. 31, 2009, the Hungarian's firm was the fourth-largest holder of GLD with more than 6 million shares. Still, that's nothing compared with John Paulson's ETF bet: Paulson & Co. holds 31.5 million shares of GLD...equivalent to nearly 96 tonnes' worth...which, at today's Gold Price, is worth just under $3.45 billion.

What's interesting is that the other two US bullion-backed gold ETFs – the iShares COMEX Gold Trust (NYSE Arca: IAU) and the ETF Securities Physical Swiss Gold Shares (NYSE Arca: SGOL) – haven't seen nearly the same boost in demand as GLD.
IAU and SGOL are substantially smaller than GLD, with only 25.2 million and 3.2 million outstanding shares apiece, respectively (in comparison, GLD has about 363 million outstanding shares). IAU holds about $2.76 billion in assets under management, while SGOL holds $334 million, according to the National Stock Exchange.

One might think that with increased general interest in Gold ETFs, both funds might see a pickup in investor demand. But in fact, we're seeing the opposite: Since the beginning of 2010, SGOL has started cannibalizing IAU's shares...like Ross Perot siphoning votes from George H.W. Bush...as these numbers from Bloomberg show – figures quoted in thousands ('000). 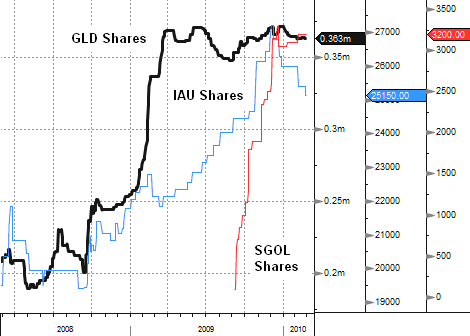 The rock that is GLD remains, however. So where does gold go next?

If the Gold Price truly were in a bubble, then the sky would be the limit for where gold goes next. A recent Bloomberg survey reported 15 of 22 analysts forecasting that the yellow metal would make further gains this year, with Goldman Sachs predicting $1380 an ounce in the next 12 months. HSBC concurred, predicting a peak of $1300 in 2010.

Continued buying by central banks may lend support to prices as well. Last year, the world's central banks became net gold buyers for the first time in two decades – and according to CPM Group, at least, the trend could continue. Currently, central banks hold approximately 18% of the total gold ever produced. Add that to continued uneasiness over the world economy – and, of course, fears over inflation – and we could see gold go much higher in the days ahead.

Still, despite its great run recently, gold has a long way to rise before I get my free steak dinner. And I haven't forgotten what Brian Nick of Barclays Wealth said when we had him on our site a few weeks ago:

"Look at virtually any other market where you'd see signs that people were worried about inflation, and they don't exist anywhere – except the gold market."

For the very best Gold Prices – live online – plus secure storage of your physical property in Zurich, Switzerland for one-third the cost of an exchange-traded gold fund, click through and register with BullionVault now...