END_OF_DOCUMENT_TOKEN_TO_BE_REPLACED

Priced in gold, a barrel of oil is sinking fast...

Because if so, then why is gold up and oil down? Shouldn't the gold-oil ratio – the cost of one ounce in barrels – stay pretty static?

As the Greek debt crisis unfolded and fear of Continental contagion spread, capital streamed to safe-haven investments like the greenback and gold. Meanwhile, the prospect of a further meltdown in aggregate demand tilted an already-glutted oil market – for WTI crude, at least – downward.

Put simply, oil got cheap, not only in Dollars, but also in terms of Gold Bullion. Recently, as the gold-oil ratio below tells us, an ounce of gold could buy as few as six barrels of crude to as much as 25 barrels... 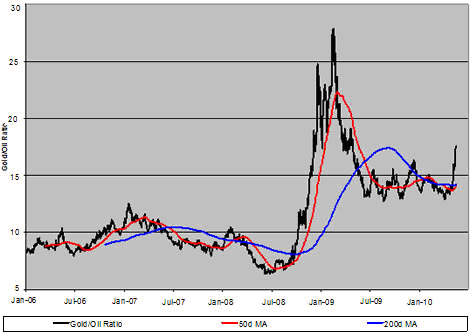 Take a look at the chart, though. We've had a vertical ascent in the ratio this month. We're pushing on the 18-times level now.

The question for traders is whether this is a repeat of the late-year 2008 move or just a short-term blip.

The consensus – a thoroughly unscientific poll as it happens – seems to line up with the blip notion. For now, at least.