END_OF_DOCUMENT_TOKEN_TO_BE_REPLACED

Just where in its bull market does Gold sit right now...?

QUITE OFTEN when I'm talking to investors – even sophisticated ones – I realize that they treat all metals as a single group, writes John Lee of Goldmau.com.

Confusing Gold and silver for nickel or zinc, and particularly in the subset of base metals, most point to the price action of copper and conclude that all metals are in a raging bull market with no signs of slowing down.

Closer examination of the correlation between various metal prices, however, reveals a very different story, as we shall illustrate.

"There is nothing new in Wall Street," as Jesse Livermore, the famous US speculator from the start of the 20th century is quoted in Reminiscences of a Stock Operator. "There can't be anything new, because speculation is as old as the hills. Whatever happens in the stock market today has happened before and will happen again."

The same is true in the metals and Gold Market. Each market invariably goes through different phases of a bull, starting with bottom...then accumulation, rise, mania, rolling over, crash, sucker's rallies, and finally the whole process starting over again.

People can attribute various reasons along the way for the rise and crash. The fact is, however, that price patterns are repetitive and can be observed time and again.

Let's start with oil, for example.

Mania in the Oil Market 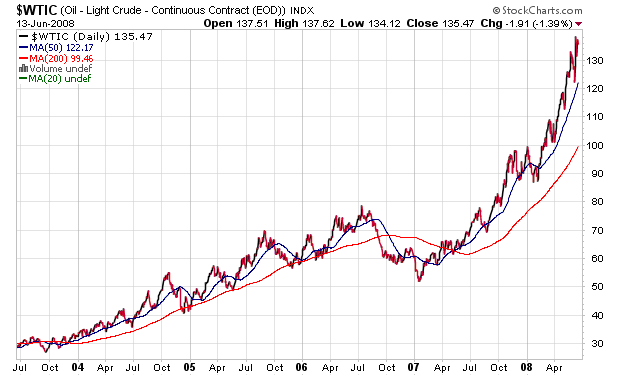 Does oil seem stretched and entering a short-term mania phase? Yes, I would contend. I wouldn't go short, but I would certainly put in a tight stop if I were long.

Rolling Over in Copper 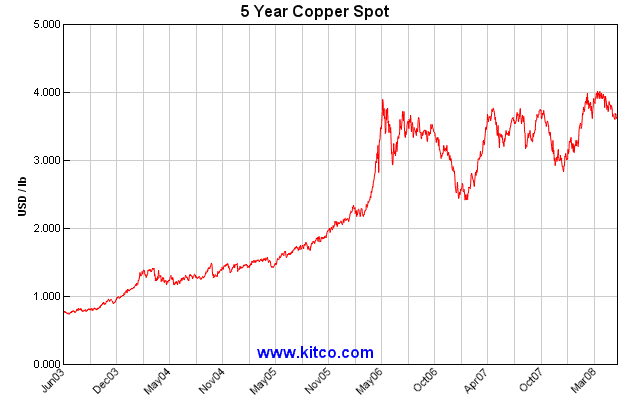 Copper seems to be rolling over and unable to convincingly overcome the $4 level. With $200 oil possible (but not too probable in my opinion), this could propel copper past the $4 level.

But conversely, a correction in oil could break copper back to $3 in a hurry.

The Crash in Lead 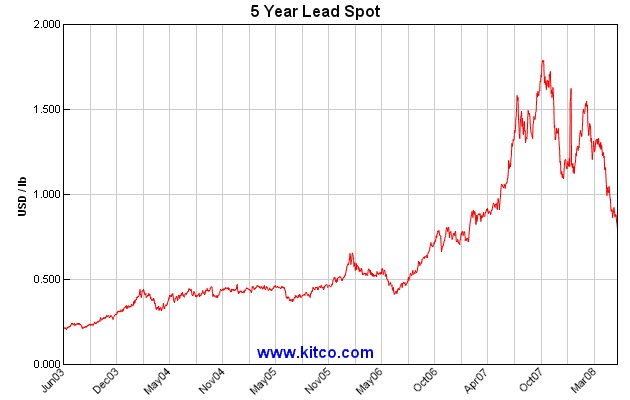 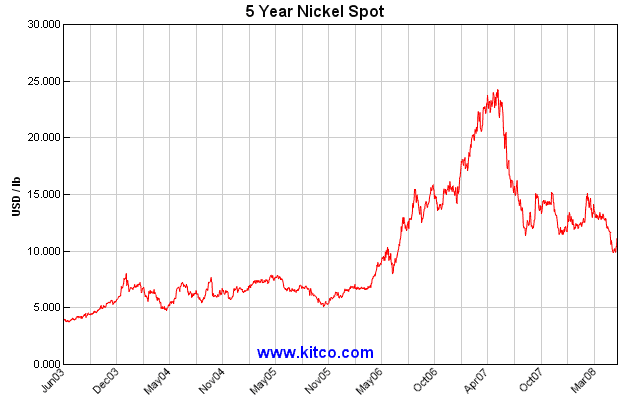 Nickel resembled lead, except the peak was established in mid-'07 instead of early '08. Since the $23 peak, nickel has staged several sucker's rallies and seemed to be settling down at the $10 level. 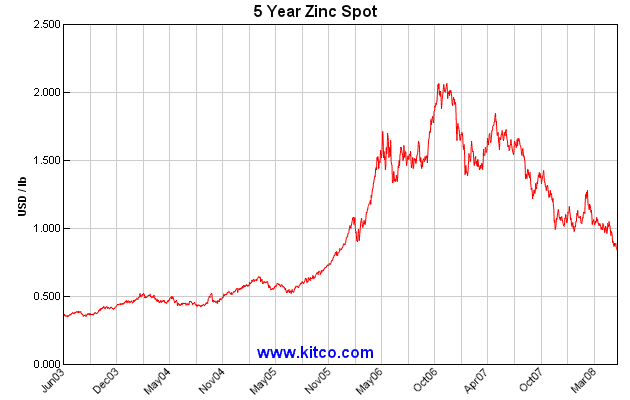 Zinc peaked ahead of nickel at over $2 in late 2006. Since then many players have lost their shirts calling for zinc's bottom. Given zinc peaked ahead of lead and nickel, it will likely be on recovery mode faster with less risk of downside from here. 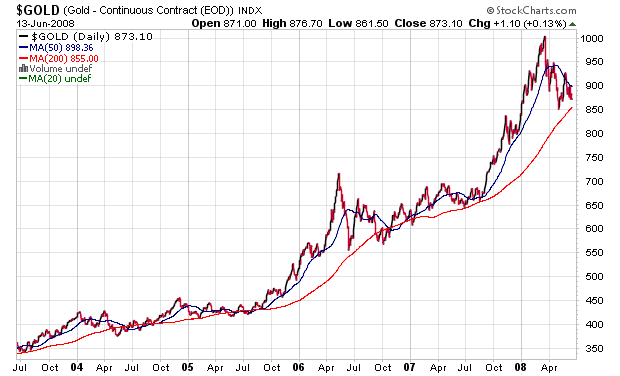 Gold has been on a steady rise since the bull market began in 2001. Throughout the bull, gold it has stayed above 200-day moving averages and yet it has yet to exhibit parabolic action, as oil did; consequently, the chart suggests the blow-off phase for gold is yet to come.

Fundamentally, while gold is not as cheap as zinc when measured in oil, nonetheless, based on historic relationship, a $130 oil calls for a Gold price that is substantially higher than today's $900 per ounce. 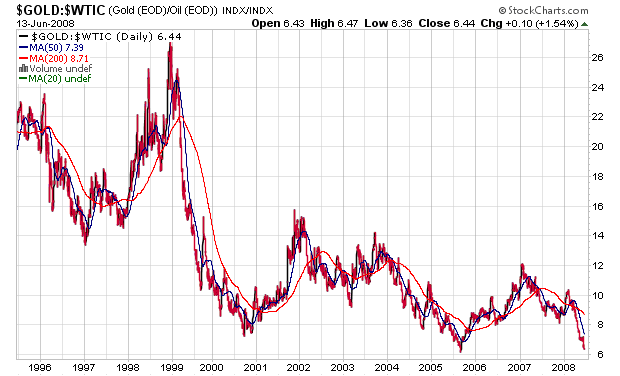 The ratio of Gold-to-Oil prices from 1996 to present is currently at 6 barrels per ounce. The chart here shows an extreme bargain in gold relative to oil, therefore.

Here is a chart of where I see various metals markets right now: 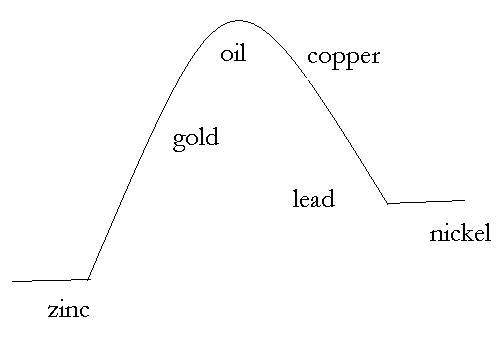 Looking only at these charts, you might accuse me of being overly technical and ignorant of fundamentals in the metals market.

Some analysts even attribute base metal price action to inventory levels alone. But if such a relationship held true, zinc would not be trading at roughly one-third of its 2007 high of $2.2 per pound, because the difference in inventory levels between now and then is negligible by historical standards.

In fact, inventory levels have never been a good forecast for future metal prices. 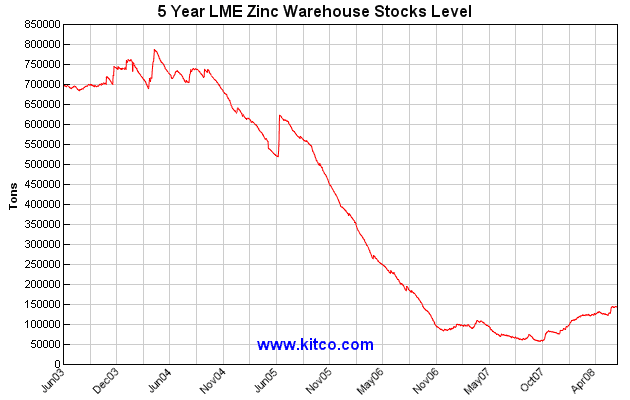 To borrow the overused Wall Street saying, "buy low and sell high" is particularly applicable in commodity investing right now. Metals such as zinc will never be made obsolete in my lifetime. Against rapid currency debasement – plus $4 trillion in debt held by the central banks of emerging-growth economies around the world – my view is:

Metals investment was the focus of my workshop at the Cambridge House Investment Conference in Vancouver (June 15-16). For those interested, the write-up of the conference and my workshop presentation can be accessed here...