END_OF_DOCUMENT_TOKEN_TO_BE_REPLACED

Early sellers are buying back in...

SEVERAL commentators anticipated the correction in the Gold Price, as well as the sharp plunge in silver – if not necessarily how quickly both would fall, writes Lawrence Williams at MineWeb.

But it is interesting now that some of those who called the top are already suggesting that it may be time to move back in.

Notable among these is Peter Grandich, of the well-respected Grandich Letter.He recommended selling gold and silver right at the top. Now he's already telling readers to start climbing back in.

Grandich says: "After literally getting out within minutes of the top in silver and gold and then watching a decline I anticipated could take weeks or months happen in a matter of days, I believe it's time to go back in and buy back those positions.  I may be 10% too early but we have plenty of room given what we sidestepped.  So I'm now back in fully in gold and silver."

Looking at what has happened in the past week, gold has lost, from peak to current levels, just under $100 – a fall of around 6%, which is not massive in the scheme of things.

Silver, though, has lost around 30% from its peak.  Momentum had carried it up far faster than was reasonable and at least one commentator had described the Silver Price surge, and subsequent fall back, as "an accident waiting to happen".  It had risen too far too fast and to an extent the euphoria so generated had probably been partly responsible for dragging gold up a little faster than expected, or warranted.

In a similar manner, silver's initial stumble, and then sharp plunge, may have also been a factor in gold losing its luster.

But the sell-off hasn't just been in precious metals.  Revived general doubts about global economic strength have run over into most commodities, with investors scrambling for what they see as a safe haven – but in this respect it has been the Dollar they have turned to, rather than gold and there has been a recovery in the Dollar index over the past day or so which has been another contributing factor in the precious metals' decline.

More sober analysis suggests, though, that the Dollar is not worthy of a revival as long as the US Fed keeps on pumping money out to the banks, and then supposedly to the US economy as a whole – although there are serious doubts about how much of this government largesse is actually filtering down the line.

History tells us that money printing on this kind of scale eventually has to lead to inflation – indeed to severe inflation.  Perhaps the banks' sticky fingers have to an extent prevented this from happening so far with the government money finding its way to the investment community and boosting the stock markets rather than the economy as a whole. Another bubble waiting to burst?

Indeed all the factors which had led to the rise of gold - we'll leave silver out of it for the moment because it was speculative fervor largely responsible for that metal's over the top advance – are still with us, and at some stage the investment community will recognize this and move back into gold as the haven of preference.  Whether that will happen now - or later in the year, remains to be seen.

Long term gold proponent, Jim Sinclair, who has quite a following, advises gold holders to "relax".  He's looking for a major upturn in gold as soon as June and is still targeting $5,000 as a longer term objective.  This seems far-fetched – but then people would have said that about $1,000 gold, let alone $1500, only two or three years ago.

As for silver, will we see another meteoric rise if gold does recover first?  Perhaps too many people got their fingers burnt in the recent rise for a similar surge to happen in the short to medium term, and there could still be ground here for further falls before the price stabilizes and starts to rise again.  Maybe a return to a gold:silver ratio of nearer 45:1 or higher (currently 42.5) may be on the cards before real progress starts to be made again here.

On the bearish side, however, there are those who suggest that the decline in gold and silver may not be done yet.  Technical analyst, Dr Nu Yu, points to a "Three Peaks and a Domed House" chart pattern – I guess this means something to the technical analysis community – suggesting a gold price fall of 17% to around $1290 by June, but offers no further projections beyond then.  His chart is shown below courtesy of www.munknee.com. 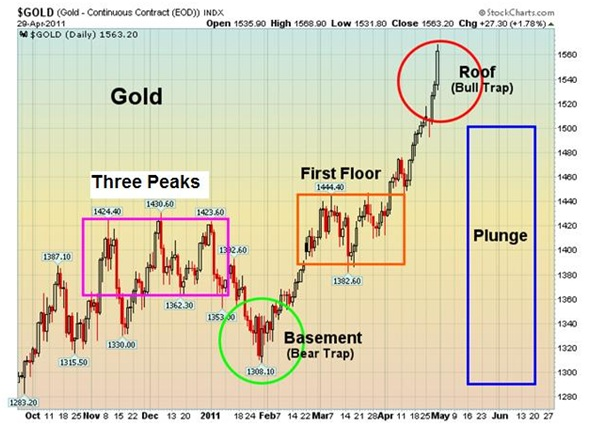 As with economists, so it is with gold analysts.  There are always drastically opposing views.

Get the safest gold at the lowest cost with the World No.1 BullionVault...

Founded in 1999 as part of the Johannesburg-listed MoneyWeb media group, Mineweb is one of the world's leading sources of mining and metals-investment news, comment and analysis. Managed since 2003 by professional mining engineer Lawrence Williams – formerly of Mining Journal, and with more than 30 years' technical and financial experience in the sector – MineWeb provides thorough, international coverage of the natural resources industry.