END_OF_DOCUMENT_TOKEN_TO_BE_REPLACED

Do you need to chase 25% gains a year from gold to get a good night's sleep?

WHY DO SOMETHING SIMPLE when you can do something complex instead?

Choose the complex route, and you'll get to charge investors 1.5% per year for the pleasure of over-complicating their risks as well as their potential gains...plus one-fifth of any profits they make on top!

"We believe that gold and silver is the cheapest asset class at the moment and that the cost of production has put a floor under the price," says Mark Mahaffey, a former director of Bank of America and now chief financial officer of Hinde Capital Ltd, a new London-based precious metals fund.

"We are at a monetary juncture so it is not only advisable to invest in gold – it is a must," he adds. Hence his urgency in setting up the new Hinde Gold Fund in record-quick time.

Registered in the Virgin Islands, this gold-based hedge fund took less than three months to gain approval from the UK's investment regulators, the Financial Services Authority. And charging 1.5% per year – plus 20% of the gains made by those clients choosing to make the minimum $100,000 investment – the Hinde Gold Fund is certainly less expensive than many other hedge funds.

Launched with $5 million of the management's own money at stake, it only requires one month's notice on withdrawals, and there is no "lock-up" period to keep new investors tied in, either.

What's more, Hinde is working on what's known in the industry as the "high water mark" principle. Every time the fund's value reaches a new high, its investors will only pay the 20% performance fee on gains made above and beyond that level. If the fund slips back, the managers are going to make do with their 1.5% annual charge alone.

So far, so fantastic for high-net worth investors! But besides buying gold on behalf of Hinde's clients, what will the fund achieve that...well...that Buying Gold alone would not?

"The startup will also use 'plain vanilla' derivative strategy to enhance performance," according to HedgeFund.net...

"The fund employs a macro environment analysis [plus] a fundamental and model approach," chips in FINalternatives...

A final technical and sentiment model will "further refine allocations and entry and exit points for each trade," adds a brokerage document released to journalists.

The rocket science of what we here at BullionVault call "quantum finance", in other words, will enable the fund to offer "smoothed-out volatility in the gold sector," claims the fund's other manager, Ben Davies. Formerly head of trading at RBC Greenwich Capital, and now chief executive of Hinde, he says he wants "to give people the opportunity to invest but sleep well at night.

"We will invest in bullion but also in equities and the derivatives [because] what people need is a structured and well managed way to re-allocate into gold."

But is a "structured" product really what investors now stepping into the Gold Market need? 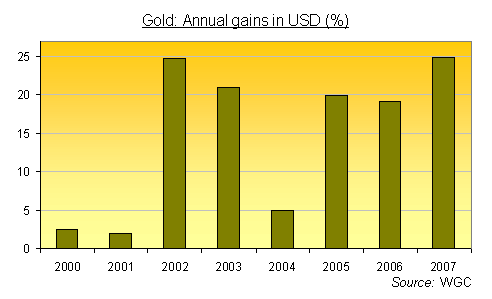 Sleeping well at night, as far as Hinde are concerned, means an annual performance target of 20-25% total returns.

Anyone simple-minded enough to just Buy Gold and hold it, on the other hand, made average gains of nearly 13.5% per year (before costs) between New Year's Eve 1999 and the start of 2007. They've also suffered volatility twice as great as that delivered by the S&P index on a weekly basis, too.

So Hinde hope to pretty much double the average return on Gold Bullion Investing seen so far in this bull market, whilst also cutting out the short-term dips.

How? As Davies told Global Money Management magazine at the start of November, the plan is to go long of those gold-related assets they think are about to go up...and to sell gold-related assets short – including gold bullion itself and mining stocks – when they look set to take a bath.

Either that, or Hinde are secretly hoping gold will just keep repeating the gains seen in 2007 to date...now pushing 25% for anyone buying with US Dollars on the first trading day of January.

Holding the S&P index, by contrast, would have returned less than 2.0% annually since the start of 2000. So far in 2007 it's delivered 3.5%, even after reaching new all-time highs in the summer. And again, these figures – which exclude dividends, of course, just like most index trackers – also come before costs, now slashed to just 0.07% per year if you put $100,000 or more into Fidelity's FSMKX tracker. (Compare that to the annual management fees of 1% plus regularly charged by mutual-fund index trackers as the Dot Com Dump turned into a crash!)

Glancing at the outlook for the S&P vs. gold here at BullionVault, we can't fault the logic behind Hinde's press-friendly launch. "We are all waking up to the idea that the government has been able to erode the purchasing value of currencies," as Ben Davies pointed out to Hedge World at the end of last month.

"Our premise on the macro side is that it wasn't until 2003 that exploration in the mining industry got kick-started" – so any meaningful growth in mining output will take until 2014 to come online.

New gold deposits also tend to sit in unstable or inhospitable parts of the world. Gold mines in established fields, meantime, have to be dug deeper, all the way down to 4 kilometers and more in South Africa. And all the while, growing pressure from the environmental lobby is adding to costs, hassle and over-runs.

In short, gold's looking good from here – not least because everything else is starting to smell so bad! But where we have to part company with Hinde's views, however, is how private investors might best take advantage of whatever gains in gold are yet to come.

Simply Buying Gold – that simplest of assets...a mere lump of metal that's becoming increasingly valuable as investors walk away from securitized and structured products – has delivered a series of strong, solid annual gains so far in this bull market.

"Past performance is no guide to the future," of course, as Hinde's regulators in London like to remind investors as if they're scolding a child. But if you cut your Gold Dealing costs to a minimum – and you pay wholesale rates for secure storage, with insurance included, so you don't have to put up with the hassle of taking gold into your physical possession – then the performance of gold is all you will need worry about.

The chances of, say, a well-paid hedge fund manager mistaking a big move in gold...going short when it's about to surge, or even gearing up with call options just before it takes a dip...won't need to keep you awake at night.

Gold offers an antidote to the complexity and leverage now causing havoc in the world's money markets. Joining its bull market now should be as simple as Buying Gold outright, and holding to see what happens next.