END_OF_DOCUMENT_TOKEN_TO_BE_REPLACED

1-in-3 Americans say they think gold is best long-term? BullionVault doesn't buy it...

So ACCORDING TO GALLUP, one in every three Americans now thinks gold is the best long-term investment, writes Adrian Ash at BullionVault.

Kinda makes you wonder where the other two US citizens have been investing since the start of last decade... 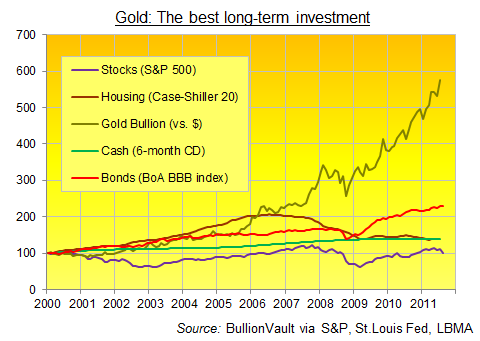 "Which of the following do you think is the best long-term investment?" asked Gallup in its telephone survey of 1008 adults. You only need eyes to see.

Real estate boomed, then bust as never before. Even with dividends re-invested, stocks have gone nowhere since the start of 2000. Cash has barely beaten inflation (and is set to keep lagging it now the Fed has promised zero interest rates until at least 2013).

So besides gold, only higher-risk corporate debt has managed to deliver a strongly positive real return. But as our chart shows, it's been way off the pace.

Trouble is, for market-timers trying to see the light in Gallup's findings, that key phrase "long-term" wasn't defined in the survey. Is that next year, next decade or not until you are dead or retired? Nor was the other key word – "best" – given much meaning either. Might it mean simply best return, or best return with lower volatility, or simply "best investment" in terms of not blowing up when some other fool defaults on his debt?

Little matter, perhaps. Because either way, the results sure do jar for longer-term gold investors. We're more used to being laughed at by friends, family, financial advisers and daily papers alike. Standing aside from the crowd was how this bull market in gold got started. And becoming the No.1 popular pick rarely bodes well for an asset's future performance.

If everyone's in, who will be left to keep bidding up prices? Well, let's take a look, using the best available survey of US family savings – the Federal Reserve's triennial survey of consumer finances (SCF) – last run in 2009, and released in spring 2011.

Unlike what people think (or say they think), actual investment takes time and money. And according to the Fed's most recent survey, Joe Public remained a long way from over-invested in gold in 2009. Despite the Gallup findings, there's no reason to think that's changed too dramatically since.

The Federal Reserve's triennial survey didn't seem to include any questions on gold. So quite which asset-class category Gold Bullion might come under we can't guess. Case by case for respondents, it would seem to depend on whether they saw gold as a financial or non-financial lump of metal – highly debatable when real estate comes under "non-financial", while all of the Fed's "financial" category is either securitized, packaged or actively managed products provided by the financial services industry.

Yes, exposure to the giant SPDR Gold Trust would perhaps show in "stocks/mutual funds". But short of a revolution in private US allocations over the last two years, far fewer than 1-in-3 adults would seem to be backing gold as the No.1 long-term investment from here.

How about in Dollars and Cents? Taking data from the start of 2000 again, it's safe conclude that – whatever the number of gold-buying Americans – they haven't stuck anything like one third of the nation's private savings into gold bullion. The World Gold Council's regular updates (see Gold Demand Trends) put net total of bar and coin demand from private US citizens at just shy of 500 tonnes during this bull market to date. On top of that, if we were to assume (wrongly) that the entire SPDR Gold Trust is held to back shares belonging to US investors, that would be another 1230 tonnes, while the iShares IAU trust would add a further 167.5 tonnes. Outside packaged financial services, the two gold market leaders online – BullionVault and GoldMoney – account for 24 tonnes and 18.5 tonnes of gold respectively.

So assuming again (and wrongly again) that every last gram belonged to US savers, we'd therefore get a grand total of 1938 tonnes...which at $111 billion by value today is but a pimple next to the $11 trillion in household net worth suggested by the Fed's 2009 SCF. (That was back when the stock market traded near 12-year lows, you will recall. And the comparison comes from over-stating US gold demand in all but the "retail bar and coin" data above.)

Now, reviewing these numbers, worse shills and snake-oil salesmen than us might dare to suggest that US citizens have barely begun to Buy Gold, and they clearly would like to. Matching their actual investment to their reported beliefs, the value of privately-invested US gold bullion would need to rise 33 times over (all other things being equal), a move which in itself would confirm gold as the very best long-term investment in history.

Between thought and expression sits the difference between $111bn and $3.7 trillion according to the calculations on BullionVault's napkin this lunchtime. We'd never be so churlish as to suggest the Gallup poll points to strong US Gold Investment demand ahead of us – not behind – today. But we would point out, yet again, that the gold bubble comes far more in media coverage than in actual investment decisions to date.

The Gallup survey, for instance, was conducted between August 11 and 14th. Gold Prices had just broken above $1800 for the first time ever, on their way to $1900 and making headlines everywhere as the stock market sank. Moreover, interest in gold – like a Google search for "gold price" – doesn't necessarily end in actual investment. But it does suggest a broader fear of low-growth-plus-rising-inflation – a fear reflected in this week's Conference Board of US consumer confidence, now sunk to a two-year low. The Economist magazine noted the correlation just this weekend.

"Edward Ritchie, an investment analyst in London...tracks Google searches for the 'gold price' as an indicator of economic confidence," reports The Economist. "[Because] the number of gold-price searches shoots up when consumer confidence dives, and subsides when households perk up again.

"Worryingly, the number of searches has recently vaulted above its 2008 peak, signalling the possibility of a double dip."

More worrying still, one-in-three Americans – including 26% of 18-29 year olds – just told Gallup they'd prefer a lump of dumb metal over capital risk. Such disillusion with America's future will no doubt prove either misplaced or self-fulfilling (depending on your proximity to Wall Street or Washington) in due course. But the only sure fact today is that our 21st century depression is clearly reflected in gold's quickening comeback as a crucial, unique, and un-ignorable asset class.

Buying Gold today? Slash your costs to get the maximum security using world No.1 online, BullionVault...