END_OF_DOCUMENT_TOKEN_TO_BE_REPLACED

MUCH IRE has been raised by the disclosure that a hedge fund unwound a huge "gold spread" trade on Comex Gold Futures, reports Brad Zigler at Hard Assets Investor.

Whence the ire? Well, the assets of the SHK fund amount to just $10 million, but the value of the fund's Gold Futures holdings was reported to be $850 million, "the equivalent of South Africa's annual gold production," according to Wall Street Journal reporter Carolyn Cui.

Comex Gold Futures open interest dropped by more than 81,000 contracts on Jan. 24th. Valued at that day's settlement price, you could say the off-take was "worth" some $11 billion.

So where does the $850 million figure come from? The reporter apparently added the contract values of the spread's legs. A spread, however, is a net trade. In its simplest form – a calendar spread – you buy one contract and sell another with a different delivery date. Long December, short April, for example.

You get a margin break – a big margin break – from the exchange clearinghouse for such a trade, reflecting the spread's comparatively low risk. As Gold Prices change, both the December and the April contracts will tend to move in the same direction, but by differing degrees. Thus, you don't have full exposure to 200 ounces (each Comex contract specifies delivery of 100 ounces of gold), but rather, to the price difference between the December and April deliveries.

So the reports, in short, simply overstate the hedge fund's actual risk.

While exact details of the trades haven't been disclosed, the context indicates the hedge fund used bull spreads (buying Gold Futures for longer-term delivery and selling short-term "nearby" contracts) as proxies for outright long positions. In essence, the fund bet on a widening contango – the premium charged for gold in the future, a relatively safe wager 'til now.

Take a gander at the chart below. It tracks a constant 12-month contango derived from the London forward market. You can see how the contango arc peaked at year's end. 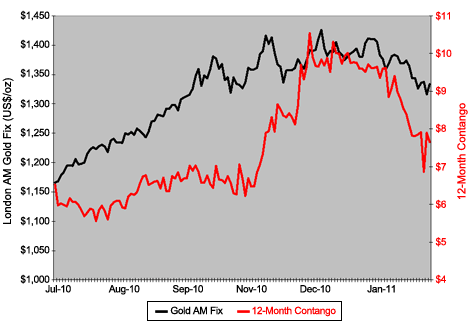 Spreads clearly don't eliminate all risk. But neither did spreads account for gold's recent wobbliness. The blame for that can be laid at the doorstep of investment funds holding outright long positions. Those funds started losing interest (or nerve) in September.

Want to Buy Gold – physical metal at the lowest cash prices – and own it outright at the lowest costs today? Start with this free gram of gold at world No.1 online, BullionVault now...