END_OF_DOCUMENT_TOKEN_TO_BE_REPLACED

THEY ARE – presumably – the best informed traders of gold and silver on the planet. And they've just drastically cut their net short position for Gold Futures, writes Gene Arensberg, founder of GotGoldReport.

The traders in question are those classed by the Commodities Futures Trading Commission (CFTC) as "commercial".

Witness a truly historic one-week plunge in the commercial net short positioning for Gold Futures traded in New York on the COMEX division of the CME.

A short position benefits if prices for the commodity fall and vice versa.

Commitments of traders data (COT) released Friday by the CFTC revealed a stunning plunge in the number of net short bets traders classed by the CFTC as "commercial" held as of the end of trading on Tuesday, June 28. 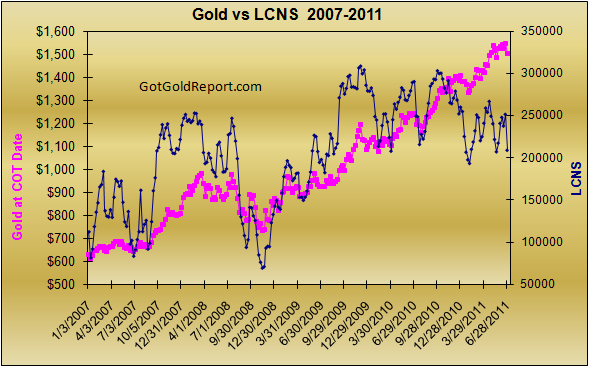 Gold down 2.9% - commercials get the heck out of nearly 17% of their short exposure – a very hot pace of short reduction.

That is the largest nominal one-week reduction in commercial net short positioning in New York Gold Futures since August 12, 2008 – during the depths of the Great 2008 Panic. With gold then off a huge $60.50 or 6.9% in a single reporting week to $813.85, the commercial traders then reduced their net short bets by 43,104 contracts or 21.7%. (See the graph above for that period.)

That is the largest one-week drop in the LCNS:TO since August 21, 2007, with gold then trading at $657.78 and staging for a major bull move higher that wouldn't peak until the following April above $1,000 for the first time ever. 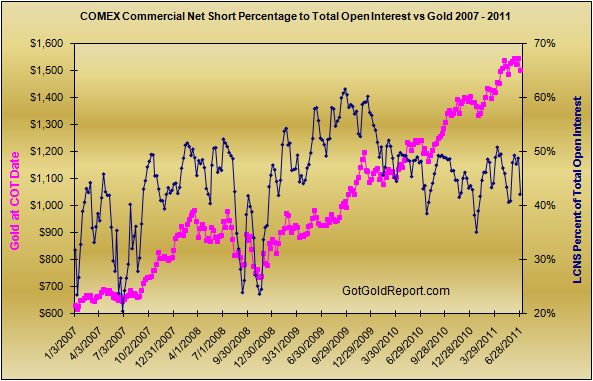 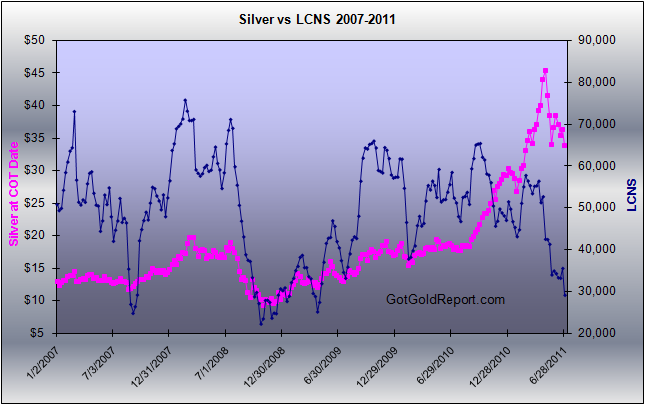 Witness now the lowest nominal commercial net short positioning for COMEX silver futures since April 28, 2009 with silver then trading at $12.48 and staging for a rally up to above $16 a month later.

The relative commercial net short positioning (LCNS:TO) for silver plunged from an already quite low 29.6% to a very low 25.5% - a drop of 4.1 percentage points in a single week. That is the lowest relative commercial net short positioning for silver futures since October 28, 2008, during the Great 2008 Panic as well, back with silver then trading at $9.19 and the LCNS:TO then at a very low 24.5%. 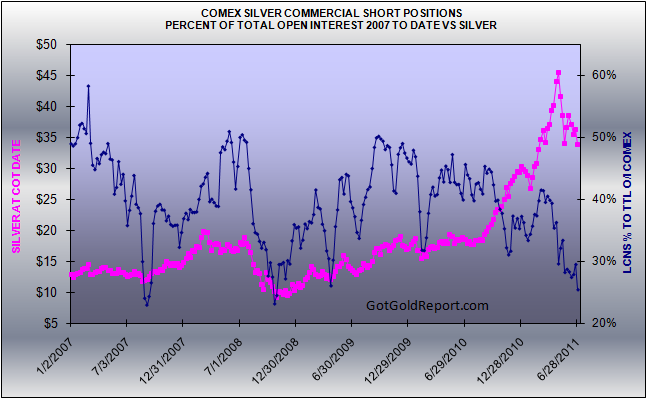 For whatever reasons, the largest hedgers and short sellers of gold and silver futures have used the recent declines in the price of gold and silver to get a great deal "smaller" in their net short bets – and in a New York hurry as evidenced in the very important graphs shown.

Most anything can happen over the very short term, but historically very large, abrupt changes in commercial net short positioning have been like klaxons sounding for experienced traders to "get to battle stations." These are indeed just the kind of very large changes of which we speak.

For silver specifically, the very low level of commercial net short positioning suggests that the Big Sellers of silver futures are not at all confident in lower silver prices just ahead. Notice that as the LCNS:TO reached the lowest levels on the graph above it almost always coincided with lows in the price of silver or very near them.

We certainly cannot say that the Big Sellers of silver futures are positioning as though THEY think that silver is set to plunge further – to the contrary. The Big Sellers are net buyers here – at a pretty fast clip, not net sellers.