END_OF_DOCUMENT_TOKEN_TO_BE_REPLACED

Something potentially explosive is unfolding in the Gold Futures' data...

IF, LIKE US, you blinked last Monday (June 7), then you missed the short-term trading opportunity of the week for silver, writes Gene Arensberg in his Got Gold Report from Houston, Texas.

We personally missed it by just a few ticks, and then decided the Gods were giving us a sign that this was not yet our entry point in the $17.50s. (Silver turned northward from around $17.20, depending on which screen was in view, near-futures or the cash market.)

Our notes that day remarked on the sudden surge of buying pressure with three question marks. Silver blasted higher nearly 80-cents on quite high volume only to turn more or less sideways for the rest of the week.

Other than physical "take-down" rumors, which are questionable – although not at all impossible – we cannot account for the sudden surge higher for both gold and silver, but especially silver that trading day. Perhaps more will come to light shortly.

On Friday, June 11, a second surge attempt was turned on its ear, as silver first broke above the $18.40s resistance, touching $18.53 in early New York trade before it encountered stiff and determined selling opposition, driving it swiftly back down to around $18.10 just before 10:00 ET.

From there until the New York close it appeared to us that the Big Sellers probably used the rest of the day to cover the firepower they expended in the sell-down, as silver managed to crawl back to near even, closing the day at $18.23 on the cash market – red by a penny for the day and up 80-cents on the week.

Such is life for a trader, especially in the somewhat less liquid early summer. Sometimes we have the trade right but get too cute with the entry order. It happens. There will be lots of other opportunities. That's the great thing about commodity trading, there are always opportunities – always.

So, friends, we remain on the sidelines with our short-term gold-silver ammunition, but, as always, we remain thankful we hold physical metal in our longer-term arsenal.

As a second reminder of why we follow the COT report, or rather why we think our focus on the changes in positioning of the Big Sellers (BS) of gold and silver futures is important, the reason we track them closely is because the very large, well-funded and presumably well-informed professional traders' positioning has the very real potential to move the gold and silver markets on a short-term basis.

Think not? Just take a look at the Friday trading of this week for silver if you doubt that statement!

With that intro, why don't we see what the BS of precious metals have been up to, starting with gold. The Commodities Futures Trading Commission (CFTC) issued its weekly commitments of traders (COT) report at 15:30 ET on Friday, June 11, 2010. The report is for the close of trading as of Tuesday, June 8. Remember that GotGoldReport.com is focused on the changes in positioning of the largest Gold Futures traders in that report – the traders the CFTC classes as "commercial," including the bullion banks, large dealers and Swap Dealers combined. We refer to those commercial traders as "LCs" for "Large Commercials".

That suggests at least some bull-side firepower has retreated, but it also suggests, with gold having touched a new all time high last week ($1,252.10) that there could be considerable ammunition yet to be thrown into the gold market. Of course there is nothing that prevents the open interest from going to a new record if additional demand is there at this price. 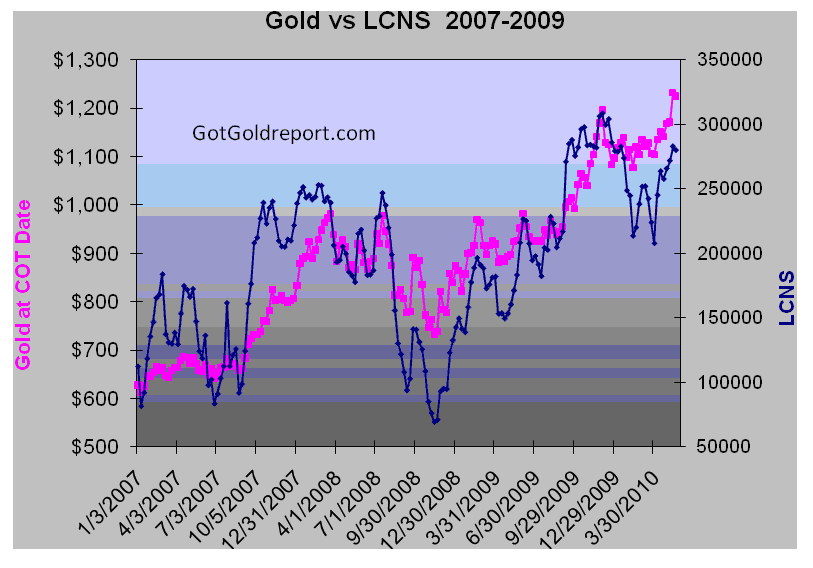 As we have said before, and speaking on a short-term basis, at extremely high open interest levels, such as right now in Gold Futures, if one is to be bullish, then it has to be under the assumption that extraordinarily strong demand is coming on the heels of all the demand which has already been deployed.

There are such times, of course, and with all the uncertainty over sovereign debt, both European and US, and with a growing mistrust of both fiat currencies and the political "leadership" currently in charge – mistrust of the people who are supposed to be stewards of the public treasury – this could very well be one of "such times."

However, as traders we look to history for guidance. Extremely high open interest levels have historically been a time for caution and for tighter stops for the short-term traders among us. It is not about what we think gold or silver "ought" to be doing, it is more about what the largest traders in the futures pits think the metals ought to be doing, because, after all, it is they who drive the market bus – we are merely passengers. It is best not to ever forget that.

Now, with the Producer/Merchant commercials very close to an all time high net short position, the one thing we can count on is that they will almost certainly take advantage of most any selling opportunity – another thing we should not forget. 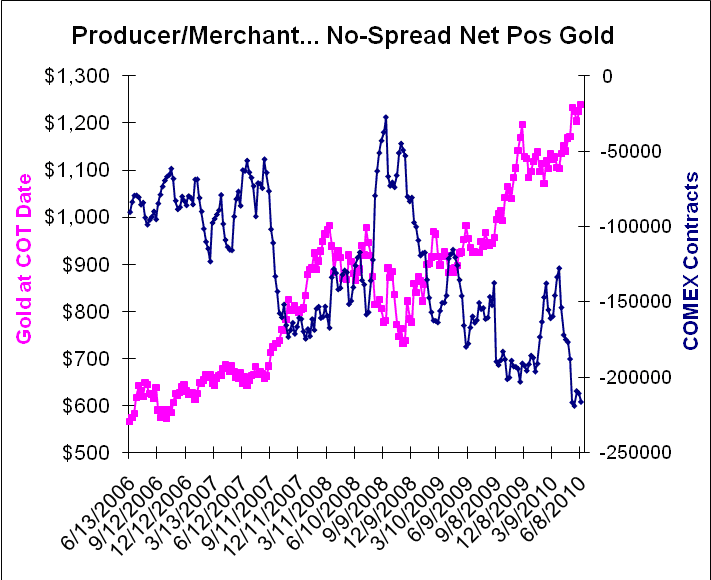 Remember that the blue line in the graph above is expressed as a negative number, so when the commercial net short position rises, the blue line falls and vice versa.

As of Tuesday the Producer/Merchant commercials – the category in which we believe the bullion banks mostly reside – held net short gold positions of 216,371 contracts. That is just a hair below their record 219,097 contract net short position set May 18 of this year with gold in the $1,220s.

Now would be a good time to note an interesting divergence between the Producer/Merchant commercials and the "other commercials", the traders the CFTC classes as Swap Dealers. 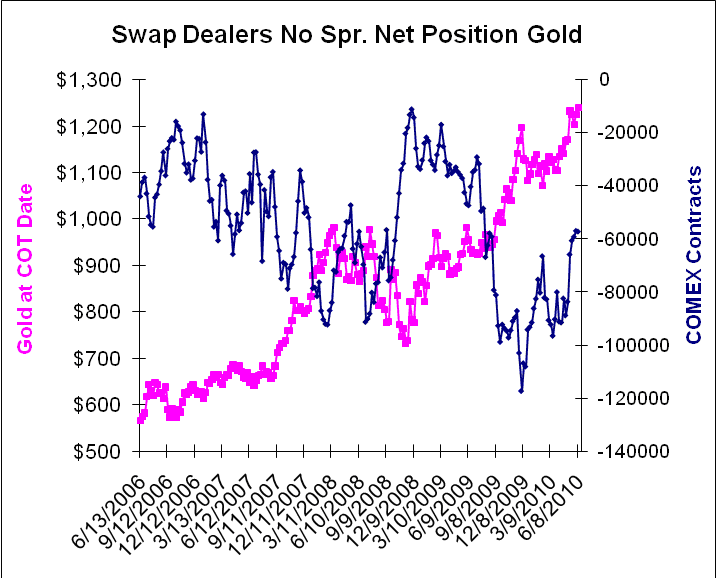 Notice that as gold has continued on to new highs, the Swap Dealers have not been keen to take the short side – yet!

We point out the divergence as a matter of interest, but also as a warning, both to long and short traders. We sense that the Swap Dealers are now in a position of strength should they decide that gold has come too far too fast. Should they throw their considerable weight to the sell side, as they have in the past (not always successfully), it could cause a run or even a forced run to the sidelines from complacent longs. Thus, our call for tight stops and no-nonsense attitudes toward this current market for the trading portion of our gold-silver capital/

The argument, of course, is that there might be a reason, a very good reason why the Producer/Merchant commercials have not thus far been joined by the Swap Dealers on the heavy short side of gold. We cannot find a time in the entire four year data set of disaggregated COT data when the Swap Dealer's net short positioning was so divergent from that of the Producer/Merchants. That in itself is enormously interesting, if perhaps not necessarily predictive.

Since last Tuesday, when gold printed a new USD all time high of $1252 on the cash market, gold has more or less consolidated between roughly $1215 and $1240. We noted aggressive selling in New York near $1,240 Wednesday and at progressively lower marks Thursday and somewhat lower on Friday. The buy-side seemed strongest near $1216 on Friday, but was probably assisted by late short covering.

Clearly the Producer/Merchant commercials are positioned as if they are confident in lower Gold Prices, being near record net short gold as of Tuesday. Equally clearly, they are not now joined by the commercials classed as Swap Dealers, who seem to be reducing their net short exposure opportunistically. On balance we cannot point to excessive "hedging" by all commercials combined in this report. Nor can we point to excessive short covering, however we once again call attention to the interesting divergence between the Producer/Merchants and the Swap Dealers. One of them is getting "wronger" and one of them is getting "righter". Our instinct under the circumstances is to be cautious just now, leaning slightly toward the bullish side. (We use the term "hedging" loosely because the CFTC does.)

When compared to all contracts open, the relative combined commercial net short positioning (LCNS:TO – the most important graph we track) barely changed this extraordinary week from 48.3% to 48.4% of all COMEX contracts open. 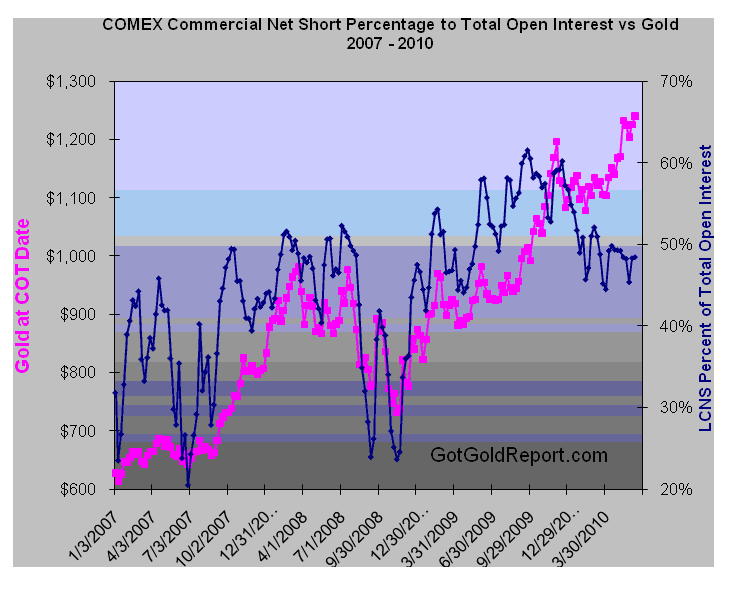 Now hear this: With gold over $1200 the ounce, and having just cut a marginally higher new all-time high in Dollars, we have – instead of an LCNS:TO near 60%...instead of an LCNS:TO which screams to us that the largest gold sellers are supremely confident in lower Gold Prices just ahead – a relative commercial net short positioning more than 13 percentage points below the all-time high LCNS:TO of 61.6% set September 22, 2009 with gold then around $1010. And this coming with the open interest not all that far from an all time high.

We can point to the Swap Dealer commercials directly for the cause of this apparent divergence from what we have normally come to expect from the Big Sellers (BS) of gold. Something potentially explosive, or perhaps historic is unfolding right before our eyes in this COT data. Our antennae are raised, and our defenses are also up, with a sharp eye on what the "swing vote" in commercial futures, the commercials classed as Swap Dealers, do next.

Want to Buy Physical Gold, rather than paper futures, and own it outright with the utmost security for just $4 per month...? Start now with a free gram of gold at BullionVault...