END_OF_DOCUMENT_TOKEN_TO_BE_REPLACED

The Gold Price in Euros says the ECB president is failing in his No.1 task...

The FINANCIAL TIMES just chose Jean-Claude Trichet – head of the European Central Bank (ECB) – as its "Person of the Year, 2007".

Okay, so Time magazine opted for Vladimir Putin – the former KGB spook now rehearsing his puppeteer skills at the Kremlin. But was the FT's short-list really that bad? Couldn't Paris Hilton find a space in her diary to claim the award instead?

At least the air-head heiress delivered as promised last year, denting only good taste in the process. Monsieur Trichet's inflated celebrity, on the other hand, now threatens to cost the world dear... 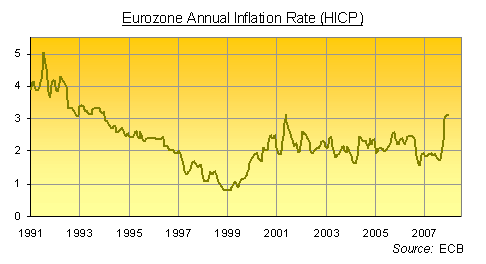 Trichet's primary task as president of the ECB – according to the very treaty that established it – is to deliver "price stability" to the 320 million citizens of the Eurozone (Malta & Greek-speaking Cyprus joined the fun on New Year's Day).

Put another way, his official 2.0% annual inflation target means €1.00 of living expenses today should cost no more than €1.02 by this time next year.

But anyone shopping in Euros this Christmas, however, found the cost of living 3.1% higher on average from Dec. '06 – or so says the EuroStat agency. Europe's festive inflation out-ran even November's seven-year record. It came close to undoing almost 14 years of inflation-fighting by the ECB and its pre-Euro ancestors.

And things had been going so well, too! For 2007 as a whole, consumer price inflation in Europe averaged 2.14%. But curiously, that's exactly the rate it hit in Sept. before racing higher as Christmas drew nigh.

What changed in the summer of Trichet's star year? "One of his strengths is his ability to manage a crisis – he enjoys that," says Olivier Garnier, adviser to the ECB chief in his former life at the French Treasury in the early 1990s. And by golly, but Trichet got a crisis to relish this summer!

Relaxing in the sleepy French fishing port of Saint-Mâlo, Jean-Claude Trichet awoke one August morning to find "the first financial market crisis fought by BlackBerry from the beach" surging across the Atlantic towards him, gushes the Financial Times.

"As the ripple effects of the collapsing US subprime mortgage market caused global finance to seize up, the ECB announced it would unilaterally pump in unlimited overnight liquidity: in the end it added almost €95bn ($136bn, £69bn)...

"Initial shock at this unexpectedly radical intervention gave way to admiration of [the ECB's] steady hand," the newspaper goes on, hardly able to contain its praise...

"As the drama unfolded, the ECB appeared to be setting the pace among central banks. In the ultimate compliment, the venerable US Federal Reserve and Bank of England copied the tactics of an institution not yet 10 years old."

Hurray for Trichet – and three cheers for unlimited liquidity!

Hosing Paris and Frankfurt with overnight loans, Monsieur Trichet secured his place in history as "one of the few to emerge from the turmoil with his reputation enhanced," the FT declares. He certainly helped save the blushes of BNP Paribas, proximate cause of the interbank lending panic when it suspended three investment funds on 9th August after the "complete evaporation of liquidity" in the subprime US mortgage-bond market.

But our brave little pompier actually hosed so much cash into Europe's money market, he's since felt the need to mop up the puddle 14 times in the last 14 weeks, draining a total of €390 billion in Christmas week alone.

In the 456 weeks between the ECB's birth and October, by contrast, the Bank only drained "excess" liquidity from Europe's money market a total of 21 times, offering government bonds in exchange for cash.

It's a pity, in fact, that Monsieur Trichet didn't think to take a couple of Euros out of the market before this summer's turmoil began... 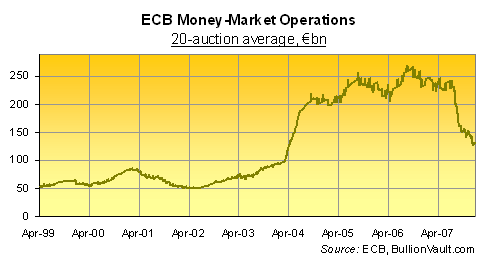 Indeed, our chart seems to show how the real hosing came to end when the world's money-markets froze back in August. But the number of ECB auctions helped pick up the pace, reaching 7.8 on average per month vs. 5.5 averaged per month during the preceding eight years.

Did the flood of liquidity help save the world's financial system? Was it even needed? Funnily enough, as Trichet himself said to the European Parliament on 19th Dec., "there has been little evidence that the financial market turbulence since early August has strongly influenced the dynamics of broad money and credit aggregates.

"Indeed, the expansion of loans to households and non-financial corporations has remained robust, which may suggest that the supply of credit has not been impaired." 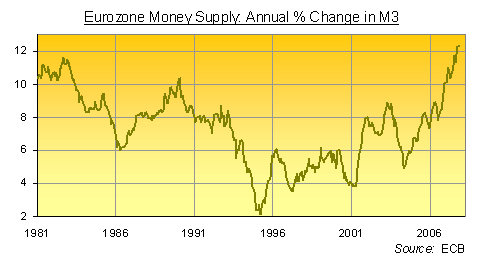 Controlling the Eurozone's money supply is supposed to make up one-half of the ECB's policy tool kit.

Indeed, capping the number of monetary units in circulation used to be the "first pillar" of the grand anti-inflation stance it adopted at the dawn of Christendom's third millennium.

But the idea of actually using Bundesbank-style discipline to deliver German-style low inflation soon lost out to watching "broad economic data" instead. Now playing second-fiddle to what Wolfgang Munchau of the Financial Times tellingly calls "the real world view" of economic growth, consumer prices and trade-weighted exchange rates, the ECB's initial money-supply target – under which the broad M3 measure of liquidity would grow by no more than 4.5% per year – has quietly slipped from the ECB's speeches, press releases and official statements.

Unloved and un-mentioned, it's come to look like some ridiculous ex-spouse...still bent on sending a Valentine's card each year but using his left hand to scrawl "Guess Who...?" Since the Euro became flesh at the start of 2000, however, actual growth in Western Europe's money supply has outpaced the "reference value" by more than one-third. It met or fell below that target for barely 10 months.

And right now the quantity of Euros in circulation – both physical and digital – is growing two-and-a-half times faster than the ECB's initial prescription, taking the Eurozone back to the runaway credit inflation of the late 1970s. 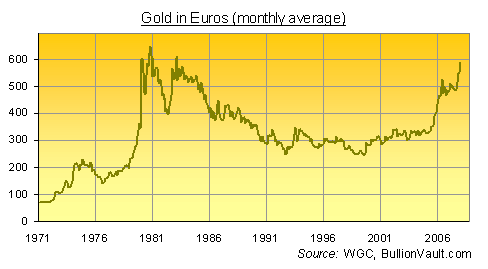 No wonder then that "at a global level, the risks for [price] inflation are on the upside," as Monsieur Trichet told the Bank for International Settlements (BIS) this week in Switzerland.

No wonder either that the Gold Price in Euros has exploded as a result. The citizens of France, Germany and Italy saw the Gold Market scoot higher towards €600 per ounce as Monsieur Trichet's year of 2007 reached its end.

Will his policies at the ECB cap inflation – and stall the surging value of Gold Prices – in 2008? Here at BullionVault, we think a fireman hosing a burning house with kerosene would have more chance of saving the furniture.

"There is a danger of second-round effects on headline inflation," as the FT's Person of the Year told the Bank for International Settlements in Basel this week. Perhaps he was thinking of Berthold Huber – head of Germany's IG Metall union – promising his members "a mega year" for pay awards, starting with demands for an 8% increase in the steel sector.

Or maybe Jean-Claude Trichet was thinking of the six public-sector unions now threatening to strike over higher wages & pensions in his homeland, France...or the failure of above-inflation pay awards in Italy's public sector to prevent fresh strikes this month...or maybe the current wage-talks in Spain, where annual pay awards are still linked to inflation – which is currently running at 4.1% from this time last year.

In Germany, even the very poorest workers – those who "suffer most from inflation" according to Trichet himself in an interview with EuroNews last year – have come to expect an inflation-beating pay rise this year. The Social Democratic Party is pushing for a minimum wage of €7.50 per hour (some $11) in the world's third-largest single economy. Sharing power with Angela Merkel's Christian Democrats in her "grand coalition", the SDP might just force the issue, too.

Several big unions, however, are pushing for an even greater "second-round effect" of the ECB's failed inflation-busting worth a massive €11 per hour (more than $16).

In short, "there is no room for complacency [on inflation]," as Monsieur Trichet, a former member of France's militant PSU party, told his audience in Basel. But what else beyond complacency would explain the surging M3 money supply...now growing fast enough to match the surging rate of monetary expansion in the United States and not far behind the wanton inflation of Britain and China?

It's the poor – and the poor middle classes, especially pensioners on fixed incomes – who pay most when money loses its value. Top earners, led by Europe's hottest financial hot-shots in Frankfurt and La Defense, can look after themselves.

Not least with a flood of short-term central-bank loans so great that the wave of liquidity needs mopping up by the very firemen themselves!

So for all the good he's done defending the value of Euros, Trichet may seem a weird choice for "Person of the Year, 2007". But for saying one thing and doing another...and for helping the forces of inflation to mass, even as he claimed to stand firm against them...he has corralled the spirit of our financial age better than even Ben Bernanke at the US Federal Reserve.

Jean-Claude Trichet – truly the man of the moment.