END_OF_DOCUMENT_TOKEN_TO_BE_REPLACED

With Euro-rates stuck near zero, which currency will be next on the right-hand side of XAU...?

FOR THE FIRST five years of its life, the European single currency was as good as gold, at least as far as the gold market was concerned, writes Adrian Ash at BullionVault.

Gold priced in Euros moved barely 10% away from its average price between Jan. 2000 and Jan. 2005, even as Dollar-gold prices rose by more than one-half. And in this, the Euro more than equaled its predecessor, the Deutsche Mark.

During the last 10 years of the DM, the daily Gold Fix in Frankfurt had moved 20% either side of its average. US Dollar prices moved in a 50% range. 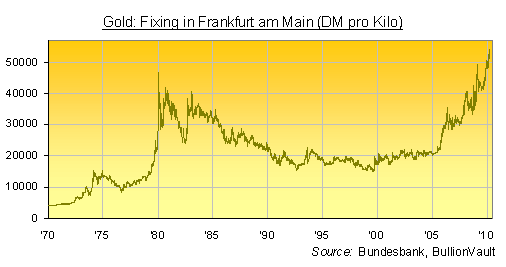 Since the middle of the last decade, however, the Euro's gold-tracking stability has deserted it. Gold's pre-Euro peak against the Deutsche Mark is also a distant memory.

As the chart above shows – calculating the equivalent DM price from Dresdner Bank's Euro Fix at the irrevocable exchange rate – gold has now beaten the spike of Jan. 1980 by some 16.8%.

Yes, those Eurozone funds sold on replicating gold's Dollar-price moves have missed out on the metal's much simpler (and cheaper) currency-hedge gains. But by keeping its rates stuck at 1.0%, the European Central Bank is inviting speculators to fund the new long-gold/short-Euro bet at very low cost, if not quite as cheaply as short Dollars, Yen or Sterling.

"We all share a destiny in common," said ECB president Jean-Claude Trichet at Thursday's press conference. But that common destiny was supposed to be the Deutsche Mark's famous stability, rather than Club-Med-style currency attack.

And in a world of near-zero rates everywhere, the real question is which major currency will be next to sit on the right-hand side of XAU – the wrong side of gold – in bank-analyst recommendations.

How best to Buy Gold today? Keep it simple, safe and low-cost by using BullionVault...