END_OF_DOCUMENT_TOKEN_TO_BE_REPLACED

Can the European Central Bank subdue Gold while the Fed keeps US rates below zero...?

"Whether it's steel or oil, we see it everyplace," he said.

A few hours later, the Fed halted its aggressive rate cutting campaign, leaving the Fed funds rate unchanged at 2%, but signaled it's in no hurry to rein-in hyper inflation.

"Uncertainty about the inflation outlook remains high [but] the FOMC expects inflation to moderate later this year and next year," said the Fed in its accompanying statement.

The Fed admits that its hands are tied by the banking crisis and the slide in housing, and is afraid to lift the Fed funds rate ahead of the US elections. It also thinks the "Commodity Super Cycle" is a speculative bubble ready to burst under its own weight. Therefore, corrective action by the central bank isn't required.

That's why the Fed is letting inflation seep deeper into the economy in order to support Wall Street bankers, and has squandered the last ounce of its anti-inflation credibility.

That's good news for gold bugs, who put were on the defensive by Bernanke's bluff about defending the Dollar. The Bernanke Fed is holding the Fed funds rate far below inflation. In the 1970s, this condition stoked near-hyperinflation in consumer prices, and the Bernanke Fed is repeating the same blunder.

Still, a psychological barrier that is blocking a spirited gold rally is the ECB's move to ratchet German interest rates higher. 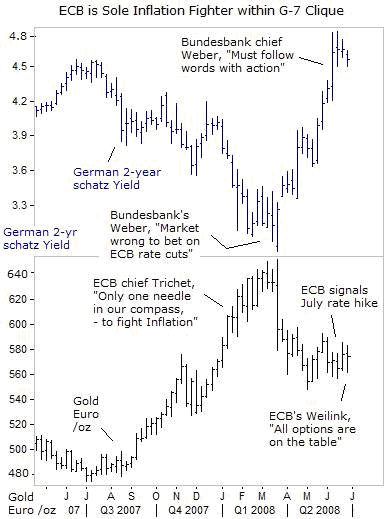 The ECB is the solo inflation fighter within the G-7 clique. The ECB has guided the German Schatz yield to seven-year highs. But so far, it's only knocked the Gold Price in Euros about 8% lower.

The ECB's anti-inflation efforts are thwarted by the "super easy" money policies of both the US Fed and the Bank of Japan (still holding its rates at 0.5%), while the Banks of Canada and England show no inclination to reverse their rate cuts anytime soon.

However, the ECB is starting to get some back-up support in the battle against inflation from central banks in the emerging world.

Might that finally cap the bull market in Gold?

Geopolitical events can overtake the ECB's battle with the simmering Gold Market. And US military chief Admiral Michael Mullen is expected in Israel this week, amid speculation of a possible aerial strike aimed at Tehran's nuclear weapons program.

"Obviously, when Chairman Mullen speaks with the Israelis, they will no doubt discuss the threat posed by Iran," said Pentagon spokesman Geoff Morrell on June 25th.

"The US is committed to resolving the nuclear threat posed by Iran through diplomacy and international sanctions, while at the same time holding out the option of a military strike, if necessary," he warned.

Speculation about a possible Israeli strike heated up this week after former UN ambassador John Bolton told London's Daily Telegraph that Israel could strike Iran's nuclear sites between the November 4 election and January.

"According to Israeli security sources, Iran will have an operable nuclear weapon by 2009. That's not a very long time," said CBS consultant Michael Oren on June 25. 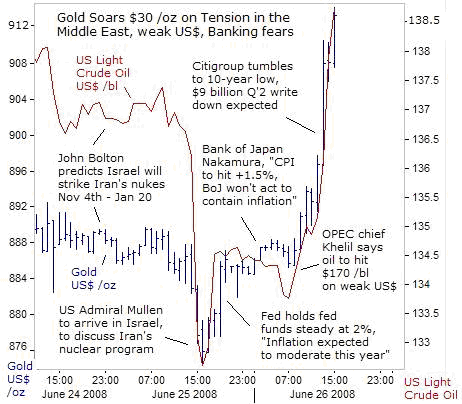 Gold Prices jumped by $30 an ounce amid a perfect storm in early New York trading on June 26th, with investors attracted to the yellow metal's "safe haven" status once more.

Citigroup shares meanwhile fell to their lowest level in nearly a decade after Goldman Sachs said the largest US bank might take $8.9 billion of write-downs in the second quarter. And then Opec chief Chakib Khelil predicted "oil prices will probably be between $150-170 during this summer.

"The devaluation of the Dollar against the Euro will probably generate an $8 rise in the price of oil," he told France 24 television.

What will this mean for the price of gold?

To read the rest of this story, subscribe to the Global Money Trends newsletter for insightful analysis and predictions of: