END_OF_DOCUMENT_TOKEN_TO_BE_REPLACED

Gold Bullion has risen faster against the Euro and Sterling than vs. the Dollar...

TO THE SURPRISE of many investors, the Yankee Dollar has earned only a third-place ribbon for its depreciation against gold over the past 12 months, writes Brad Zigler at Hard Assets Investor.

With all the recent hoopla and headlines about gold making new highs against the greenback, the destruction derby of the world's reserve currencies is actually won by the Euro, with Sterling close behind, on an annual basis. 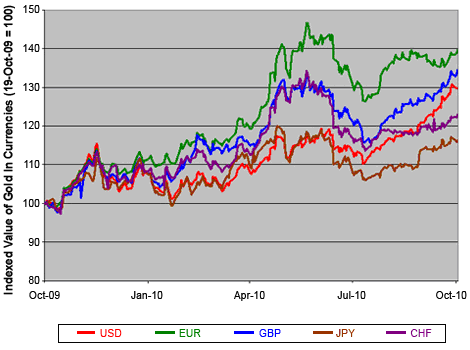 Oddly enough, the US Dollar is also the least volatile reserve currency when it comes to Gold Bullion purchasing power, too.

The standard deviation of the Gold Price in Dollars stands at just 15.3% for the past year. This may not seem like a testament to the Fed's steady hand on the nation's economic tiller, but it's something. It actually bespeaks the wait-and-see attitude of the central bank after last year's stimulus and accommodation.

The likelihood of Fed intervention increases when commodity prices – a basic metric of inflation – rise or fall significantly compared with Treasury securities. In the chart below, the red Fed Indicator line dances within a neutral zone – a condition that compels the central bank to watch, but not act. A sustained move in the indicator above the upper band would signal an increased likelihood of accommodation – or lower money rates and a weaker Dollar.

A dip below the lower band flashes a higher probability of tightening, or higher rates and a stronger Dollar... 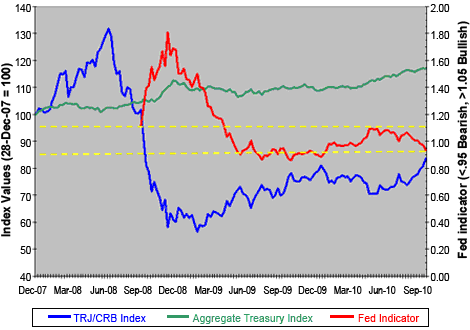 Keep in mind that this indicator is just that – an indicator. It measures the likelihood of Fed intervention, not its certainty. Political considerations – which can be substantial – are put aside here.

For now, the Fed's keeping a fairly even keel – even though it's been economically painful for employees or the unemployed. There's nascent inflation, reflected in the blue line's recent trajectory, which complicates the Fed's handling of the Dollar. What's economically expedient may not be politically fruitful.

On the other side of The Pond, Sterling's been the most volatile currency, flopping about with a 17.8% standard deviation in the Gold Bullion market. Largely, this reflects the rising and falling fortunes of the former Labour government. And with all this, one can't ignore the longer-term trends.

Since the Euro's introduction in 1999, the Pound's lost more ground to Gold Bullion than any other reserve currency. Sterling's average annual loss in gold purchasing power has been 15.3%. The US Dollar follows with an average loss of 14.8% per year. Meantime, the Euro's given up an average 13.1% each year. 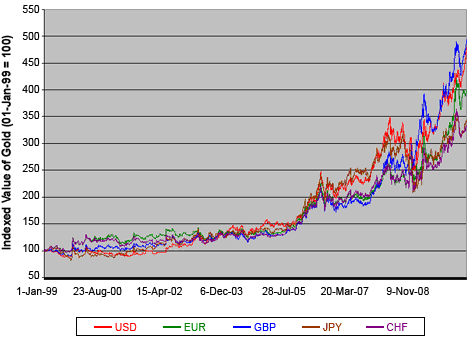 Kinda makes you wonder who'll take the pennant next year!