END_OF_DOCUMENT_TOKEN_TO_BE_REPLACED

Unlike the Australian Dollar, gold pays less interest than even the US Dollar or Japanese Yen...

IF GROWING INFLATION is our future, then a likely-looking bolt-hole for retained capital must be the Australian Dollar.

Offering the strongest developed-world interest rates since long before the global financial crisis, the Aussie's exchange rate maps investor sentiment towards the "commodity super-cycle" theory, thanks most of all to Australia feeding China's fast-growing appetite for raw materials.

But the Aussie Dollar also points, therefore, to investor fears of deflation – most spectacularly in its currency cross with gold bullion... 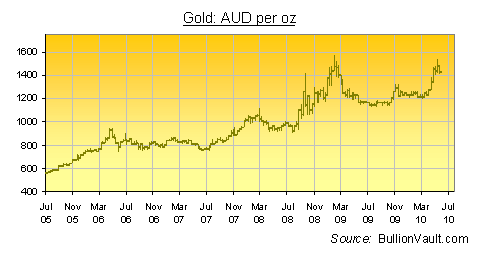 Unlike the Aussie, gold pays no interest. It has little industrial use, finding economic value instead in its social use of storing value when other, more growth-reliant investments fail.

And yet, as our Gold Price chart shows, gold has just signalled a huge swing in sentiment...away from the commodity market's super-rally of mid-to-late 2009...and back towards the meltdown fears of fall/winter 2008.

Yes, a bust in Australia's consumer-credit and housing bubbles looks long overdue. Yes, the Rudd government's mining-tax blunder has weighed on the Aussie as well. But gold's rapid recovery in AUD per oz – up some 27% from start-March to within a few bucks of last year's record spike – comes even as the Reserve Bank raised its cash rates three months running, up from 3.75% to 4.50%.

The threat of Eurozone (if not broader) defaults trumped rising rates, in short, as well as what the RBA calls an "unprecedented" boom in commodity exports.

That'll be gold rising on deflationary fears, then, just as it did during the Great Depression and again at the start of 2009.

How best to buy gold today? "If there's an easier way, I've yet to find it," says one Bullion Vault user...