END_OF_DOCUMENT_TOKEN_TO_BE_REPLACED

Gold has dominated the first decade of the 21st century. How come nobody's noticed...?

NO MATTER which currency you earn, spend or invest, Gold Bullion has been the best-performing asset class bar none this decade.

I'll say that again, in italics and with an exclamation mark at the end, because chances are you didn't quite catch it:

Gold has dominated the last nine years for investors, smacking everything else in the nose and pulling their ears, too!

Indeed, when finance advisors and investment hacks come to glance back at this decade from their space-capsule/peak-oil/water-logged/much-like-today future (delete as appropriate), they'll see it – in fact – as the "decade of gold".

Just as US tech stocks ruled the 1990s, rising 11-fold on the Nasdaq. Just as Japanese exporters owned the 1980s, up more than six times over on the Nikkei-225. Just as gold itself dominated the 1970s. 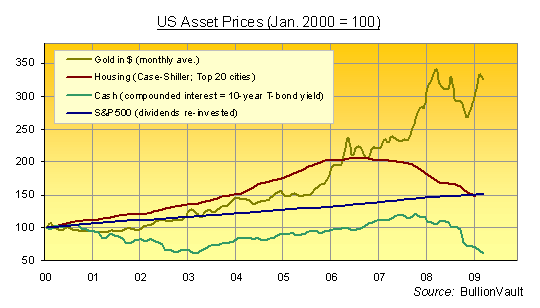 Of course, this is hardly a unique insight amongst contrarian investors – meaning those bloody-minded know-it-alls, guided by history, now wagging their fingers at the global financial crisis and tutting "I told you so..." to an audience no bigger than it was (i.e. zero) when they did, indeed, tell you so starting 10 years ago if not sooner.

Hell's teeth, at least one tech-stock heretic – Bill Bonner of The Daily Reckoning – called gold the "Trade of the Decade" just as the decade began.

But even though Bill's call has come good (and come good better even than his blushes would hint), the mainstream investment industry still refuses to notice the cold, hard fact of gold's decade-beating performance.

Take the out-performance of gold for US investors, for instance. Go on – take it! Because nobody in the financial media wants to acknowledge it. Yet this decade, only residential real estate managed to beat gold consistently (excluding costs as well as rentals), right up until granite-n-plasterboard began to flatten and crater in spring 2006.

Housing has since fallen so hard, it barely matches the risk-free return offered by cash since the start of the decade. Yet that risk-free return in itself stands one-third below the previous five-decade average, with the 10-year Treasury yield paying just 4.6% per annum before tax and inflation.

And as for equities, re-investing every red cent of your dividends for the last 111 months would have added only 15% to the capital value of holding the S&P index today. Sadly for buyers of the Big Double Top in US equities, however, 15% hardly makes up for the index halving in price so far this decade.

Whereas Gold Bullion...? We need to be clear: Its historic reign throughout the Noughties is much more than a matter of "Dollar Decline". The deathless, unyielding metal has beaten all other assets for investors worldwide, whether in Euros, Yen, Swiss Francs, Chinese Yuan, Indian Rupees and the erstwhile "Two-Dollar" Pound. 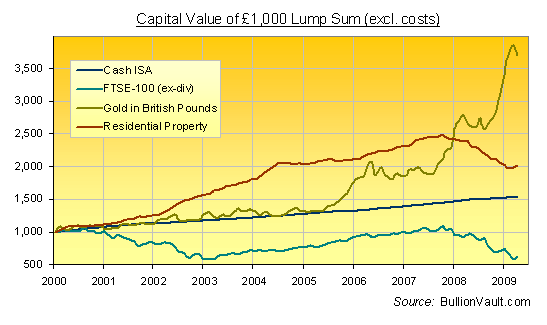 But what happens next? With the decade's last summer now peeping across the horizon, is that it for Gold Investment?

Could be. History might well say it's finished. Provided you read it correctly, of course.

After rising six-fold during the Eighties and peaking just shy of 40,000 points in late '89, the Tokyo Nikkei sank by more than four-fifths over the next 14 years, retreating to fresh quarter-century lows just last month.

Following its spring 2000 top, and starting from 17 times its Jan. 1990 level, the tech-heavy Nasdaq sank by three-quarters inside 31 months, reclaiming only half its peak at the bounce and standing two-thirds below there in April '09.

As for gold, a little over 29 years ago it began a two-decade descent...dropping more than 70% from its infamous peak above $800 an ounce – a level breached for just two, short winter days in January 1980.

Over the preceding ten years – the previous decade of gold – its price had shot 17 times higher versus the Dollar. Gold ended the bell-bottomed Seventies some 13 times more valuable in terms of business assets, shooting higher as the US stock market was crushed by record-high interest rates sparked by yet higher inflation.

If this is the top – or damn near it – therefore, the current decade of gold looks a poor (if not late) performer. During the 2000s, gold has risen 5-fold in terms of equities, and gained some 250% in nominal dollars.