END_OF_DOCUMENT_TOKEN_TO_BE_REPLACED

What Gold reveals about the US Dollar's purchasing power parity right now...

BACK IN 1883, a 60-page language guide published in Britain became the object of so much hilarity that American wit Mark Twain sang its praises as the "perfect" work of humor, writes Brad Zigler of Hard Assets Investor.

The book, English as She Is Spoke, was intended to be a simple Portuguese-English phrase book. Instead it became a masterpiece of unintended mirth.

The Portuguese authors wanted to provide their countrymen with English words and phrases to use when traveling to the British Isles. But they were beset with a trifling problem.

Neither man knew a lick of English.

Undaunted and possessed of a modest command of French, they set about their task by first translating a Portuguese-French conversational guide into English with the aid of a French-English dictionary.

You can imagine the result.

A query to be directed to a barber sums up the translation problem neatly: "Do you dress the hairs?"

The ensuing recommendation for what to talk about when you're there should give you pause next time you converse with your own hairdresser.

Traveler: "Your razors are them well?"

Traveler: "Comb-me quickly; don't put me so much pomatum. What news tell me? All hairs dresser are newsmonger."

Barber: "Sir, I have no heared any thing."

Now, what on earth does all this have to do with hard assets?

Well, here at HardAssetsInvestor.com, we've written much about the relationship of commodities and inflation. Much of the discussion, too, has been Dollar-centric. Because commodities are priced in greenbacks for world trade.

The Gold Price, for example, is set in dollars at the London Bullion Market Association's twice-daily fixings. It's commonly priced in Dollars in the ever-moving "spot" market, too.

That said, Gold buyers are constantly making translations of their home currencies through the Gold Market, sometimes to surprising effect. Look at gold's history over the past three years, priced in various currencies: 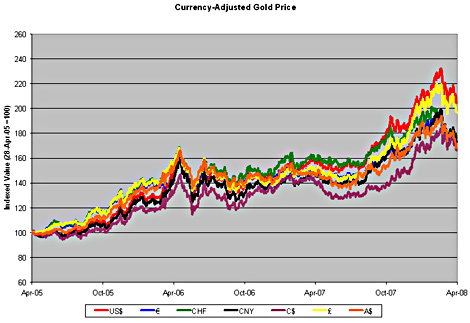 Using Gold as a benchmark, the chart seems to indicate that its value has risen most in Yankee Dollars over the past three years and the least in terms of Canadian Loonies. Put another way, the Americans have inflated their Dollars by the greatest degree; Canadians the least.

This may seem surprising to folk who don't live in border states or provinces, so we should check our math. To do that, we'll dust off a notion from Econ 101: the theory of purchasing power parity.

The theory states that exchange rates should equalize the price of goods in any two countries. Thus Gold can help us judge just how far currencies deviate from fair value.

The implied purchasing parity price is the exchange rate that makes the US-Dollar price of gold the same in each country.

When looked at from a current Gold Market standpoint, most of the world's major currencies are trading fairly close to parity, though all are a tad overvalued against the greenback.

Most egregious is the Chinese Yuan, which previously was the object of so much jawboning about its cheapness.

From this simple translation exercise – exchanging currencies through Gold – we've found that the selling of Dollars has been overdone a bit for the time being.

Not that I know who's been doing it, mind you. "I have no heared any thing."