END_OF_DOCUMENT_TOKEN_TO_BE_REPLACED

Gold: Due a short-term correction, but a long-run bull market...?

SO THIS is what happens when you don't have a free market for money, writes Dan Denning in his Daily Reckoning Australia.

A committee of men and women whose interests may be more aligned with the banks than yours get to set the price of money and make a hash of everyone's careful long-term planning.

How is it theoretically consistent, as my friend Gary North asks, to have central planning for money in a free market system?

Will the Reserve Bank of Australia's decision on Tuesday to raise interest rates for the first time in 19 months expose people who didn't plan for it? Of course it will. The housing sector is where we'll find out. And you can guess what we think of housing, can't you?

We think the Federal government behaved shamefully by suckering first-home buyers in with free cash when interest rates were historically low. Now that rates have begun moving up, the most marginal buyers will begin feeling the pinch. And what will happen to house prices?

As far as stocks go, there might be an even bigger rates-related story playing out. The RBA becomes the first G-20 central bank to lift rates. Whether it's stupid or prescient, no one knows. But we have to consider the possibility that it could ignite a reversal of the trend in global bond yields. Yields on government and corporate debt could be headed higher now.

Mind you we don't think the US Fed will be raising short-term rates in America any time soon. It would crush what little chance there is for a recovery in US housing. But on the longer end of the yield curve (the part the Fed does not control), investors might begin sending interest rates up and bond prices down. Relatively speaking, this makes stocks a lot more attractive.

Maybe that's why stocks in New York rallied over night. And maybe that's why Aussie stocks were up after yesterday's announcement and are up again this morning. It could also be that investors are buying the "recovery has begun" story, which would be goofy but possible. But for whatever reason, stocks are suddenly looking a lot more compelling than bonds.

But let us not forget Gold. And how could we? It's so shiny. Gold hit an all-time high of US$1,040 yesterday. It won't make a new high in inflation-adjusted terms until it clears US$2,000. But the question on everyone's mind is whether gold is going to make higher highs from here...or corrects.

The case for the correction is simple. Check out the chart below. It's the commitment of traders report from the New York Gold Futures market. You can see from the figures at the bottom that both the number and the percentage of large speculators who are bullish is at record levels.

That alone would dictate some short-term trading caution. 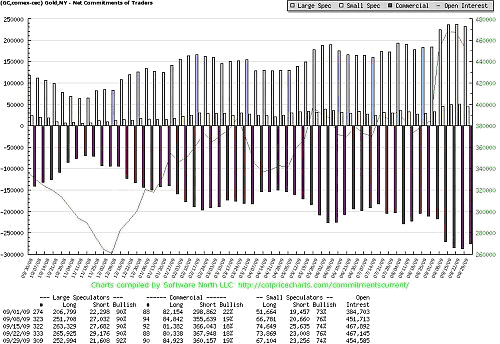 What's more, the emergence of the gold exchange traded funds (Gold ETFs) has put a huge portion of the gold market in a very small number of institutional hands. So if the ETF shareholders sell...and the trusts in which they own shares then sell the gold they hold...who will they sell to?

More succinctly, a lot of the gold demand is coming from a few institutions. If other institutions (central banks and sovereign wealth funds) don't pick up the slack, there will be more sellers than buyers and prices will fall.

But not so fast, says the world of geopolitics. Gold could go much higher if the world's entire monetary order (or disorder) shifts away from the US Dollar. And that's just what The Independent's Robert Fisk wrote yesterday in an article that set the internet all a-twitter. He called it, "The demise of the dollar."

Fisk wrote that, "Gulf Arabs are planning – along with China, Russia, Japan and France –to end Dollar dealings for oil, moving instead to a basket of currencies including the Japanese Yen and Chinese Yuan, the Euro, Gold and a new, unified currency planned for nations in the Gulf Cooperation Council, including Saudi Arabia, Abu Dhabi, Kuwait and Qatar...

"The transitional currency in the move away from dollars, according to Chinese banking sources, may well be Gold."

If that were the case, well then – that changes everything. In this role, gold becomes a hedge against devaluation in the US Dollar. Not so much a hedge against inflation (a systematic increase in the supply of dollars printed to hold up the US banking sector and finance a grasping Federal government) as a move to protect assets against a sudden Dollar collapse.

Granted, in the ho hum developed Western world we live in, currencies simply don't suddenly collapse. They erode over time. And one fine day you find your purchasing power is not what it used to be.

"The only element of a classical emerging market crisis that is missing from the US and UK experiences since August 2007 is the 'sudden stop'," writes Buiter, "the cessation of capital inflows to both the private and public sectors...

"But that should not be taken for granted, even for the US with its extra protection layer from the status of the US Dollar as the world's leading reserve currency. A large fiscal stimulus from a government without fiscal credibility could be the trigger for a 'sudden stop'."

One important aspect of these "sudden stops" is that they are almost never events you would choose to participate in. But you have to anyway, or monetary events overtake your investment portfolio. This is why these episodes in monetary history are so chaotic.

And it's why – if we're entering one of those episodes now (or at least the most unstable period of it as we move from one reserve currency to a basket of currencies) – the price swings in asset markets are going to be impressively volatile.

All that said, the move up in the Aussie cash rate has sent the Aussie Dollar higher. Thus, the Aussie Gold Price went down overnight, not up. It could be that in the short term, the migration of global capital flows out of the USD favors Aussie equities more than gold (from an Australian perspective).

So about that 5,000 on the All Ordinaries...Does it now look a lot more likely given the events of the last 24 hours? Or are we on the cusp of a significant correction to the rally of the last six months?

And by the way, has there ever been a better time to figure out what gold is really all about? These are serious and far reaching issues. It's high time for a serious and far-reaching discussion of them. If that sort of thing interests you, make sure you read about the upcoming gold conference in Canberra early next month. You can read more about it here.