END_OF_DOCUMENT_TOKEN_TO_BE_REPLACED

A look at current gold demand in the world's two largest gold markets...

IT LOOKS like the two giant domestic consumers in the gold market – India and China – have downed tools, at least in part, since the price's assault on $1,600. While the underlying market sense is one of gradual acceptance of rising prices, the recent price gain, of more than $110 (7% in a fortnight), has slowed demand for the time being, says Rhona O'Connell, managing director of GFMS Analytics, writing for MineWeb.

The charts show turnover on the Shanghai Gold Exchange since the start of 2009. The rapid growth interest over the medium-term is clearly apparent, both in terms of tonnage and the notional value of the gold traded on a duly basis.

The turnover figures are not precise, reflecting merely the tonnage turned over combined with the London morning fix, rather than the local Yuan price and any local premium or discount to the international market, but they are close enough to demonstrate how the market has developed. 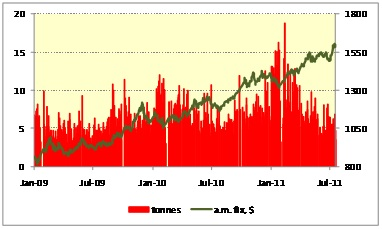 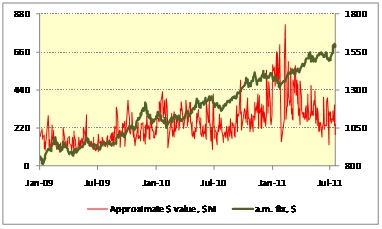 Average daily turnover in 2010 on the Exchange was 6.6 tonnes, or $260m. In the first quarter of this year, with the Chinese appetite for gold seemingly insatiable, daily turnover was 10.0 tonnes or the equivalent of $448, an increase of 72%.

We have noted before that demand was incredibly strong even after the Chinese New Year, and the continued strength on this seasonal basis was essentially unprecedented. Momentum in the second quarter, however, dropped to below the daily average of the whole of 2010, down to 6.0 tonnes, with the Dollar expenditure down to $293m per day.

And what of early July? The sharp rise in price has curtailed interest, if only for the short term.

Tonnage turnover has fallen to below five tonnes daily, while the implied value of the gold turned over has dropped towards $250m in the third week of the month. In tandem with the rise in the Gold Price of course, has come the news that the HSBC China Purchasing Managers' Index dropped below 50 in July, slipping to 48.9 as industrial growth starts to respond to the government's tightening policies; while China's economic growth rate has been reduced, with an annualized rate of 9.5% in the second quarter of this year. Growth in the first quarter was 9.7%. 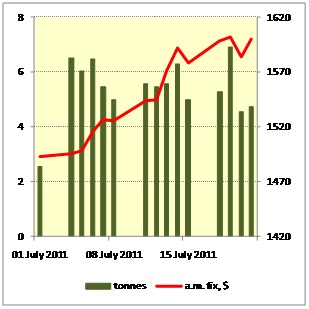 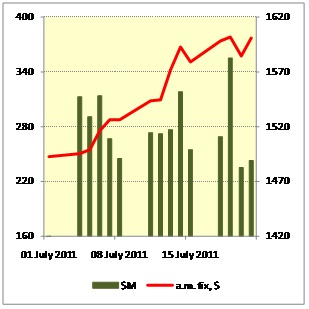 Reported domestic inflation in June hit 6.4%, and despite a series of interest rate hikes this year, this keeps Chinese real interest rates in negative territory. After the most recent rate hike (in the first week of July and the fifth in ten months), the one-year deposit rate stands at 3.5%, while the lending rate has been increased to 6.56%.

The next few months will be key in determining Chinese gold investment and although the current signals, with slowing economic growth, might argue against sustained strength in local gold demand, the local appetite for gold has only relatively recently been stimulated through the opening of the market.

In addition the expansion of scope of local institutions to invest in the gold market through the Qualifying Domestic Institutional Investor (QDII) program may yet unleash several billions of Dollars of Chinese funds into the international market. So the dragon may be cooler, but it still has the scope to breathe fire.

In India, meanwhile, some parts of the crouching tiger have gone to sleep, but others are still on the alert. Prices in the Ahmedabad market have been flirting with a discount to the international market, but Mumbai appears still to be thriving, with some jewelers reporting sustained sales in the anticipation of higher prices still.

India is in the middle of the monsoon season, which typically slows demand, but for the time being at least, this seems to be making little difference, with traders covering against expected fresh demand on the back of the market's bullish mood.

Here too, then, the market has become patchy, but the underlying tone appears to be robust. In the first quarter of 2011, India and China between them took up 526 tonnes of gold in jewelry and investment products (World Gold Council figures from GFMS), or 57% of world demand in these sectors.

Over the whole of 2010, these two countries absorbed 1,645 tonnes in these sectors, 45% of the world total gold demand of fabrication and bar hoarding (but exclusive of Over the Counter and other investment product demand).

With such prominent positions in the markets, the nuances of changes in these two countries are important. For the time being, part of their potential demand has been withdrawn, but the indications are that it will return.

Founded in 1999 as part of the Johannesburg-listed MoneyWeb media group, Mineweb is one of the world's leading sources of mining and metals-investment news, comment and analysis. Managed since 2003 by professional mining engineer Lawrence Williams – formerly of Mining Journal, and with more than 30 years' technical and financial experience in the sector – MineWeb provides thorough, international coverage of the natural resources industry.