END_OF_DOCUMENT_TOKEN_TO_BE_REPLACED

The world has a debt mountain to deal with. The solution will be bad news for savers and investors...

INVESTORS have had to contend with a great deal of volatility in recent weeks – and Gold Bullion owners have been no exception, writes Ben Traynor at BullionVault.

The bad news is this is almost certain to continue. The world economy has too much debt and not enough growth. As a result, solutions put in place three years ago, when Part One of the global financial crisis was at its peak, are starting to unravel.

In 2008, you'll recall, policymakers worldwide turned to extraordinary measures in an attempt to stave off disaster. Central banks slashed interest rates lower than they'd ever been in history (they're still there). Congress passed the $700 billion Troubled Asset Relief Program, with a view to buying up toxic assets.

Gordon Brown, Britain's prime minister, seemed to think he had "saved the world" by handing taxpayers' money to the banks.

But as growth slows, these temporary fixes run out of juice – sending markets into a panic.

The problem, however, remains. There is too much debt. Policymakers will therefore have to find another, more permanent way of dealing with it. The likely solutions will be bad news for many savers and investors – who find themselves between a rock and a hard place (someone has to pay these debts, and the debtors haven't got any money).

In a nutshell, policymakers have two options to deal with debts: default or devalue. Both are bad for creditors – and both suggest many who hold Gold Bullion will choose to hang onto it until the threats to their wealth recedes.

As a guide to what policymakers may do next, it is instructive to look at the last time the world had deal with such a debt mountain: the years following World War Two.

Two economists – Carmen Reinhart and Maria Belen Sbrancia – have done just that. In a paper published in March this year called 'The Liquidation of Government Debt', Reinhart and Sbrancia argue that the postwar debt stock was largely eroded in real terms during a period of 'financial repression' between 1945 and around 1980:

"Financial repression includes directed lending to government by captive domestic audiences (such as pension funds), explicit or implicit caps on interest rates, regulation of cross-border capital movements, and (generally) a tighter connection between government and banks."

The echoes with today's climate are unnerving. Real interest rates are again negative in many parts of the world, including the US and the UK. There are fresh efforts to create more forced buyers for government debt. Governments and banks have seldom been so tightly connected – the British government, for example, directly owns 41% of Lloyds and 83% of Royal Bank of Scotland.

There is a further unsettling parallel. National debt stocks are again unsustainably high. US national debt, for example, has gone through 100% of gross domestic product: 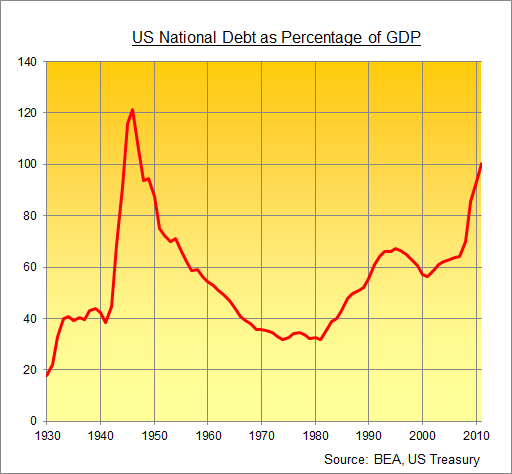 So with another debt mountain to liquidate, who would bet against policymakers reaching for the same weapons that destroyed the last one?

A key tool of debt liquidation in the decades after World War Two was low or negative real interest rates – that is, the rate you receive minus inflation:

"One of the main goals of financial repression is to keep nominal interest rates lower than would otherwise prevail. This effect, other things equal, reduces the governments’ interest expenses for a given stock of debt and contributes to deficit reduction. However, when financial repression produces negative real interest rates, this also reduces or liquidates existing debts. It is a transfer from creditors (savers) to borrowers (in the historical episode under study here – the government)."

In the US, for example, real interest rates on government bonds were negative for a quarter of the years between 1945 and 1980. The average real rate in those years was minus 3.5%, and it was as low as minus 9% in the years immediately after the war.

The findings for the UK are even starker – nearly half the years during the period saw negative real rates, which for liquidation years averaged minus 3.8%.

The big problem for savers and investors is that you can't erode the value of debt without also eroding the value of money itself.

The real value of a Dollar-denominated debt, for example, can be reduced in two ways. One is by simply repaying some of the principal. The other is by Dollars themselves losing value quicker than interest rates can add to it.

And if repression doesn't work, there's always the post-World War One solution: default. As Reinhart and Sbrancia note:

"World War I and Depression debts were importantly resolved by widespread default and explicit restructurings or predominantly forcible conversions of domestic and external debts in both the now-advanced economies, as well as the emerging markets. Notorious hyperinflations in Germany, Hungary and other parts of Europe violently liquidated domestic-currency debts."

Debt in the interwar years was liquidated quickly, but notoriously painfully. Policymakers will be at pains to avoid this. They will view financial repression – the slow grinding down of the value of money – as by far the more palatable option. Either way, though, and with policymakers facing a choice to default or devalue (or both!), there remains a case for investors to consider holding some Gold Bullion in their portfolio.

Gold is not a debt – so it cannot default. If you own Gold Bullion outright, you aren't relying on a counterparty that may not exist tomorrow (witness Lehman Brothers). Gold also cannot be created at will, so while its value will fluctuate – sometimes quite violently – it cannot be purposely devalued by policymakers.

Of course, there are no guarantees that owning gold or indeed any other asset class will protect you from a real loss. The debt problem is huge, and solving it will entail a lot of collateral damage. But the fact remains that the solutions of 2008 are coming unstuck – and the chances of a prolonged era of 'financial repression' are growing.

"The incentives to reduce the debt overhang are more compelling today than about half a century ago. After World War II, the overhang was limited to public debt (as the private sector had painfully deleveraged through the 1930s and the war); at present, the debt overhang many advanced economies face encompasses (in varying degrees) households, firms, financial institutions and governments."

The transition from one financial regime to another is seldom smooth. So if we are seeing the dawn of a new era of financial repression, we can expect the recent stomach-churning volatility to continue for a good while yet.

Whatever financial regime awaits us, many investors will continue to use Gold Bullion as a 'monetary bridge' – a way of storing some value until the dust settles. Gold has, after all, performed that role for thousands of years.