END_OF_DOCUMENT_TOKEN_TO_BE_REPLACED

Has the bull market in gold just collapsed or is it merely catching its breath?

THE SPOT Gold Price closed Nov. '07 at an average of $806.25 per ounce, a new record high – and the third record monthly average on the run.

You wouldn't know it from reading the wires or newspapers right now, however. And fair's fair.

The bull market has just collapsed after all... 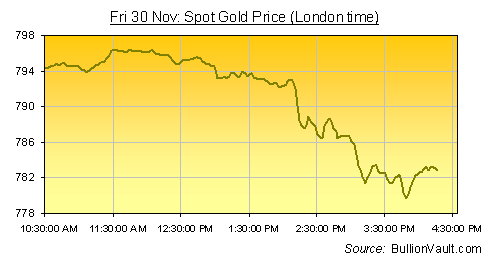 "I think you've got liquidation," as one trader put it to Dow Jones News as the Gold Market sank on Friday 30th November. "The gold bulls [are] throwing in the towel here."

"When you see so much volatility at the top of the range that tends to signal the end of the move," added Richard England, a trader at Standard Bank. "I'd say the risk to the Gold Price is to the downside."

Indeed, "gold's raving rally is over," as another metals-head said. Put another way, selling gold will give investors "an avenue to benefit from the prospect of a stabilization in the Dollar," just as Jim O'Neill of Goldman Sachs advised last Thursday.

"We would now use a short exposure in gold, expressed in US Dollars, to capitalize on a gradual relaxation of credit concerns in the financial sector over the coming months."

And just how far does Goldman Sachs think the Gold Price will tumble as the credit markets spark up a joint and breathe deep ahead of Christmas? The only US investment bank to actually make money during the credit crunch so far (albeit on paper and marked-to-model) reckons you can look for a 15-20% setback, driven by a bounce in the US Dollar.

Something doesn't fit, though. "Did you see that the metals desk at Goldman Sachs just recommended gold again?" noted a leading and very experienced gold-market analyst to the research team here at BullionVault by email. It begs the question, we agreed.

Is this a political ploy?

After all, the US Dollar has never worth less on the international currency markets. Treasury Secretary Henry Paulson says he believes in a "Strong Dollar"...and yet he's done zip to beef it up, either higher interest rates at the Fed or a slowdown in US government debt growth.

And he did use to run Goldman Sachs as its CEO, you know.

"We see upside risks to our forecast," Cabrera added – meaning that the gold market looks likely to rise above even his revised targets.

Better get your story straight, Goldmans! Is it time to buy, sell or move onto shorting the market in subprime mortgage-bonds that you helped to create? (For more on that, read on here...)

Conspiracy theories aside, it remains a fact that trying to ride this bull market in gold often feels like trying to get your heaviest friend home after way too much beer. At first glance, the big fella seems an immovable object. Once he's slumped on the pavement, he stays slumped – or so it looks.

But you know for a fact that he really is making progress. If you just stick with him, you really will both get home...some time before dawn.

The trouble is, making progress means getting your over-sauced friend up on his feet. And that's when the real trouble begins.

Soon as he's up, the big guy starts lurching from street-lamp to street-lamp, shouting at strangers and waving his fist at the cops. He gets mighty quick too, sprinting out into the traffic and then straight back onto the sidewalk.

Anyone who gets in his way risks getting squashed under the weight of hops, malt and yeast in his belly. Crashing about, he keeps taking eight giant strides back for every 19 steps forward. And he keeps on repeating – in a slurred but ever-angrier growl – that he ain't going nowhere until he's got a kebab or a pizza to help soak up the booze.

Slow progress still comes, however, as you steer out of the traffic and back onto the sidewalk. Given chance, you might even get him onto the night bus in one piece. 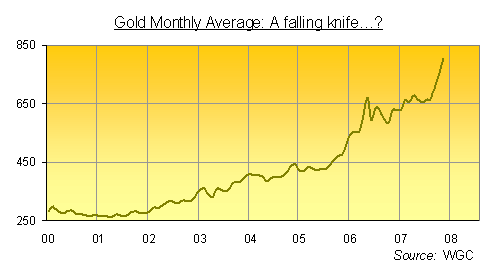 Sobered up and back at our desks, it's not just in Dollars that gold's long-term bull market rolls on, however.

Versus the Euro, Gold Prices averaged more than €549 per ounce in November, a new 24-year record. Measured in British Pounds Sterling – against which gold hit five new all-time highs this month – gold in November averaged £389 per ounce, another record high.

Does that mean the gold vs. Sterling is only sure to keep climbing? Not at all. But standing 145% above its bear market low of August 1999, Gold Priced in Pounds gives the lie to Sterling's strength.

Yes, the former world No.1 hit a quarter-century high to the Dollar this month, up there above $2.1150. But it's been losing against the rest of the world's money at the very same time, dropping more than 3% for 2007 to date.

And priced against gold, the Pounds in our pocket (what few there are...) have never been more worthless.