END_OF_DOCUMENT_TOKEN_TO_BE_REPLACED

SPOT GOLD PRICES dipped again below $1900 on Friday in London, heading for a 0.6% weekly gain after erasing all of yesterday's $70 spike on news of Russia invading Ukraine.
Crude oil also retreated, edging back below $100 per barrel of European benchmark Brent while natural gas contracts erased three-quarter's of Thursday's near 50% jump.
Driven by heavy trading in gold futures and options, Thursday's spike took spot gold prices within $100 of August 2020's record high at $2075.
Euro gold set fresh all-time records, beating its Covid Crisis high by €20 at €1768 per ounce, while the price in Yen extended the week's fresh all-time highs to touch ¥7,280 per gram, more than 3.4% above August 2020's top.
Spot gold in Sterling terms, however, peaked 6.7% below its all-time high of 18 months ago, reaching £1473 at the top of Thursday's frantic and soon-erased spike.
With global stock markets rallying after New York yesterday turned an initial 2.3% drop into a 1.5% gain on the S&P500 index, longer-term borrowing costs also rebounded Friday for most major developed economies, nearing 2.0% per annum on Washington's 10-year bonds – the highest since mid-2019 when first reached a fortnight ago – while emerging-economy yields eased back from their spike, driven by Thursday's plunge in higher-risk bond prices.
Russia's government debt prices rallied a little overnight before slipping again, holding Moscow's 10-year borrowing cost half-a-percentage point below Thursday morning's spike to the highest since Western sanctions were imposed in 2015 following Putin's invasion and annexation of Ukraine's southern region of Crimea. 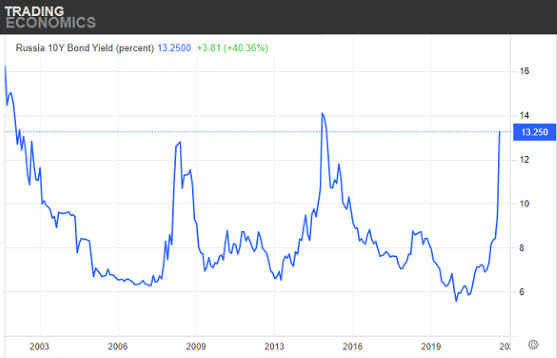 Betting that the US Fed will hike its key interest rate by half-a-point at March's meeting – the steepest policy-vote increase since the mid-1990s – halved on Thursday according to data from the CME derivatives exchange, falling from 33% to 17% of positions tracked by the CME's FedWatch tool before rallying to 21% early Friday.
That's still the weakest in over a month, and leaves betting on a quarter-point rise to account for all other trader forecasts.
But despite the drop in US Treasury bond yields amid Russia's invasion of Ukraine, betting on year-end Fed rates continues to hold strong, with half of CME betting on December's policy rate saying the Fed will have raised to a ceiling of 2.0% or more.
That would match the year-on-year Fed hikes ending in July 2006, when the sub-prime US mortgage market's worsening collapse presaged the global financial crisis of 2007-2012. 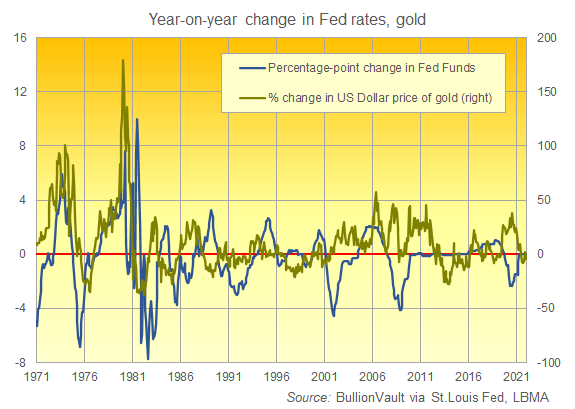 "Amid the risk of supply disruptions, we think broad commodities can be an effective geopolitical hedge for portfolios," Fox Business quotes Mark Haefele, chief investment officer of Global Wealth Management at Swiss financial giant UBS, pointing to the potential for Western sanctions against selected Russian banks, businesses and oligarchs – sharply intensified by the Biden White House last night – to hit flows from the major raw materials producer.
"[Commodities are also] offering an attractive source of returns in an environment of accelerating growth, persistent inflation and higher rates," forecasting gold $2000 on a "protracted escalation" of the conflict.
With Russia threatening to retaliate against Western sanctions as its troops attempt to encircle Kyiv, "The most extreme commodity market risk centers on natural gas," says French investment and bullion bank Natixis.
"In a worst-case scenario whereby Russia weaponizes exports, natural gas is a cheaper tool than oil from a Russian budgetary perspective," accounting for only 6% of federal revenues against 30% for crude oil, the bank's commodity teams says.
"Second...natural gas is a highly 'localised' market with A to B pipelines...meaning precise economic damage could be delivered to Western Europe [versus] a globally traded oil market.
"Finally, Russia's natural gas exports to Europe cannot readily be replaced, making weaponization more potent."