END_OF_DOCUMENT_TOKEN_TO_BE_REPLACED

MACRO changing in favor of the gold stock sector is and has been a process, writes Gary Tanashian in his Notes from the Rabbit Hole.

The process began with the leveling off of inflation's momentum and continued as the global economy began to show signs of weakness (e.g. US manufacturing deceleration and developing supply chain slack among several other problem areas as exposed during the current earnings season).

While the nominal sector (as tracked by the HUI mining-stock index or the investment ETFs GDX and GDXJ) has been bouncing within its intact downtrend, it would be best to track other macro considerations along with the chart technical analysis. That could signal a new bull phase by either completing a daily chart bottom/base (which nearly happened late-October, but at least temporarily failed as the index and ETFs did not take out the October 4th highs) or completing a final decline, preferably amid much fear and angst among whatever inflation bugs may still be infesting the sector.

As for the other considerations, they include...

Long-term yields are still a head wind and should definitively top out and reverse to relieve the pressure on gold and by extension, the miners.

Rising yields have been the result of runaway inflationary effects and as we've continually noted, the opposite – a disinflationary period of economic weakness (i.e. counter-cycle) is what the gold mining sector needs (tragically, this is contrary to what most bugs believe).

So here is the 'Continuum' of long-term yields (30yr), which has rocketed up to and through our measured target of 4% (give or take).

Note also the reversal potential of the October monthly candle. This impulsive rise, has been an equal and opposite reaction to the panic induced inflationary actions taken by the Fed in 2020. In essence folks, we are waiting for the macro to cool down, both literally and figuratively. We are still squarely in the inflationary hype and Fed hawk fear phases.

Moving on, here once again is the blunt monthly chart of HUI to guide the general big picture technical view, which is in waiting for the macro turn that would alter the still-negative considerations above.

The messages of this chart are, among other things, an index at support, still at an important 'higher low' to 2020 and 2018, oversold to a degree that ended the last correction (but not to a low that ended the last bear market), but with the technical need to hold the 150 area support and/or one of the two lows noted (142.51 or 131.12). 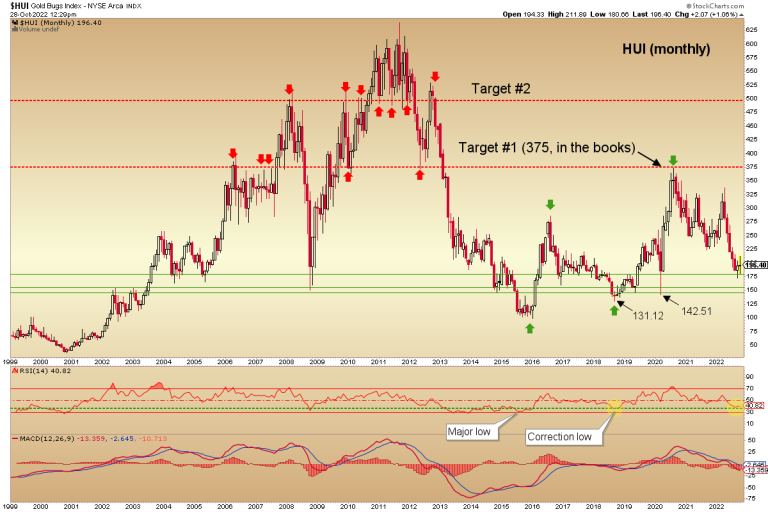 You can think of the current situation as a long process playing out that will cease being a 'process' and start becoming a new phase on its own time, not yours or mine.

With this big picture in mind NFTRH will be marrying the short and long-term technical situations with evolving macro indicators in this very important Q4, 2022 to Q1, 2023 time frame in order to have an ongoing real time gauge of the process, including when it will make sense to position in earnest.

As it stands now, the big picture risk vs. reward is positive and has been positive for months. But what we are looking for beyond positive risk/reward is activation, rather than theoretical risk analysis.