END_OF_DOCUMENT_TOKEN_TO_BE_REPLACED

Just what is up with gold – the store of value...?
AS A CHANGE from talking endlessly and aimlessly about Ben Bernanke and the Federal Reserve – something we're guilty of doing a little too often – we're going to look at gold, writes Greg Canavan in The Daily Reckoning Australia.
We like gold because it's the antithesis of Ben Bernanke and central banking. Gold doesn't try to improve things or meddle. It doesn't think it knows best. It doesn't talk about its past errors and hubristically claim it won't make the same mistakes again, even while it does exactly that.
No, gold doesn't say much at all. It doesn't seek to make friends and gives no assurances to those who try to befriend it. It only offers its long history as guidance to its ultimate utility. If you understand that history, gold will look after you.
Unlike plant equipment, a house or a factory, gold doesn't depreciate. It survives wars, currency debasement and currency transitions. It survives central banks and central bankers. Gold is not so much money as it is a store of wealth.
But gold, in the last few months, has been copping it from all angles. The most reasonable explanation we can think of is that rising REAL interest rates have diminished the investment case for gold.
Rising real interest rates occur in times of disinflation (or deflation) while nominal rates remain stable, or when nominal rates rise and inflation remains stable. With (nominal) market rates spiking in recent months on the threat of the Bernanke taper, and inflation (well, official measures of inflation anyway) remaining stable, real rates have indeed increased.
This explanation has some historical precedent. Check out the chart below. It shows the Dow to Gold Ratio. That is, it tells you how many ounces of gold it takes to buy the Dow Jones Industrials Index. At the recent peak in 1999, it took over 40 ounces of gold to buy the index, signalling that gold was cheap and US stocks expensive.
Previously, the ratio bottomed at around 1 in 1980, meaning just one ounce of gold would buy the Dow Jones index. Clearly, gold was expensive and stocks were cheap. 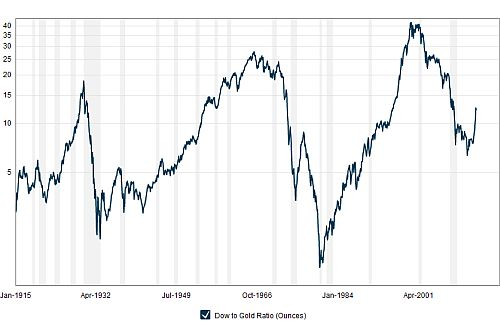 Now, we're stuck about half-way. It's reminiscent of the ratio's move in the 1970s.
Back then, the gold price bull market paused for about 2 years from 1974 to 1976. With inflation momentarily subdued, real interest rates moved higher and capital flowed out of gold. But the flow peaked and reversed in August 1976 (with the ratio at 8.87). From there, gold massively outperformed stocks for the next four years.
Now, you're seeing a similar spike higher in the ratio as gold priced in US Dollars falls and the US's largest corporations priced in US Dollars rise. But we think this is just a counter-trend rally in a huge secular trend.
And that trend is a move towards wealth-protection. It's a trend driven by an era of activist and experimental central banking that so distorts incentives and price signals that it will push capital to seek refuge from the storm.
It's only a trend that you can discern from a distance. Day-to-day, there is too much noise to even notice it. But that's what this chart is telling you.
And if you look hard enough, there are strong signs of this capital seeking refuge theme despite the price falls. A great example is what is going on with the precious metals ETFs.
GLD, the world's largest gold ETF, has seen outflows of gold of around 380 tonnes over the last 8 months or so. The common explanation is that investors are selling gold as the price falls.
But if you look at the silver ETF, SLV, it has hardly lost any tonnage over the same time frame despite the silver price falling much more than gold.
The reality is that when someone sells a share of the ETF, they sell it to someone else. No gold or silver needs to change hands. Only 'authorised participants' (bullion banks) can add or redeem large baskets of gold or silver.
That they are doing this only for gold suggests these banks are stepping in and buying the shares that panicked investors are selling, redeeming the shares for gold and then selling it. To whom? Maybe to clients of theirs requesting physical allocation...maybe to satisfy demand coming from India and Asia. It's going somewhere, anyway.
As some kind of indication that there remains intense pressure in the gold market, gold interest rates (GOFO, or the gold forward offered rate) quoted by the London Bullion Market Association (LBMA) are negative out to three months, and have been for six days. We think that's unprecedented.
A negative GOFO is highly unusual. It's occurred only in 1999, 2001 and 2008. After each occurrence gold surged higher. But the spanner in the works is that we're now in an era of zero interest rates and retarded monetary policy.
The LBMA says that a low GOFO indicates a lack of liquidity in the gold market and if you think about the banks draining GLD, you could argue that there is indeed a scramble going on for physical metal.
This doesn't mean that gold will shoot higher imminently or even that it has bottomed. But is does tell you there are some major undercurrents going on in one of the world's largest and most opaque markets.
To conclude, let us share a story we may have told before, we can't remember. Years ago (in an online forum) we were discussing a potential run on gold as people started to realise there were many more claims on gold than there was gold itself.
The discussion turned to what 'they' would do about it, 'they' being the banks or central banks that had actually created those claims and were potentially liable to satisfy them.
Someone responded with a comment along these lines: They will raise interest rates, or credibly threaten to do so....
Hmmmm. Surely not?
Attachments: