END_OF_DOCUMENT_TOKEN_TO_BE_REPLACED

Will gold hit a new all-time high on Christmas Eve? Jeff Clark of Casey Research thinks it could...

SOME OF the hardiest investors have been lamenting that Gold Prices have been stuck in a rut for a long time, writes Jeff Clark for Casey Research.

Others with less experience have watched the market waiting for something to happen...

And as always, many bailed out of the market entirely, licking their wounds. But some, including me, have been stocking up. We're convinced prices won't stay down forever.

In fact, I think there's a good reason to Buy Gold if you can, and as soon as possible.

Based on the data I chart below, I believe the window of time to Buy Gold for less than $1,700 an ounce is very limited.

I examined gold's three largest corrections since the bull market began in 2001, including how long it took to recover from those corrections and establish new highs.

The conclusion that emerged is that the current lull in Gold Prices will almost certainly end soon, if it hasn't already.

In order to determine how long it might take to breach $1,895 again, I measured the time it took to mount new highs after big corrections in the past.

The following chart details the three largest corrections since 2001, and calculates how many weeks it took the Gold Price to a) breach the old high, and b) stay above that level. 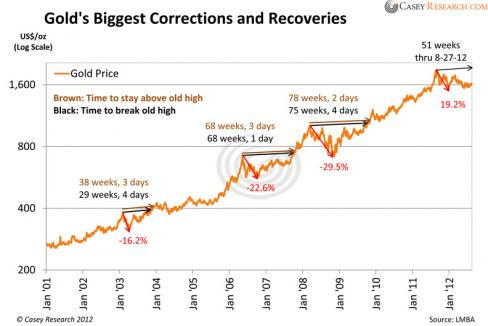 In 2006, after a total decline of 22.6%, it took a year and four months for gold to surpass its old high. After the 2008 meltdown, it was a year and six months later before the metal hit a new record. The 16.2% drop in 2003 lasted seven months, and another two months before the price stayed above it.

You can see that our correction has lasted just shy of a year. If we matched the recovery time of 2006, gold would hit a new high on Christmas Eve (Merry Christmas!).

But here's the thing: that's how long it would take gold to breach $1,900 again – it will take a couple months or more for the price to work up to that level, meaning the remaining time to Buy Gold under $1,700 will likely be measured in days or weeks, not months.

This is bolstered by the fact that the price moved up strongly last week. And just as importantly, we're on the doorstep of the seasonally strongest month of the year.

This is an educated guess, of course, but what the data make clear is that all corrections eventually end – even the bloodbath in 2008.

The current lag will, I expect, come to an end too, and we're certainly closer to the end of this corrective period than the beginning.

This has direct investment implications.

First, if gold breaches its old high, you'll probably never be able to buy it at current prices again in this cycle. That's a rather obvious statement, but let it sink in.

The next few days or weeks could be the very last time you can Buy Gold below $1,700. You'll have to pay a higher price from then on.

And think about this: it's entirely possible that by this time next year you will never again be able to Buy Gold for less than $2,000 an ounce – unless maybe it's in "new Dollars" or some other currency that circulates with fewer zeros on the notes.

Second, the data can help you ignore the noise about gold's bull market being over and other nonsense spewed from mainstream media types.

If gold doesn't hit $1,900 until December, you'll know this is simply normal price behavior and that they're overlooking basic patterns in the data. And when the price nears that level again and they're caught off guard by it, you'll already be positioned.

Regardless of the date, we at Casey Research are confident that a new high in the Gold Price will come. We expect the highs will come because many major currencies are unsound, overburdened with debt, and being actively diluted by governments.

Indeed, the ultimate high could be frighteningly higher than current levels.

As such, we suggest taking advantage of prices that may not be available indefinitely. I think we all need some of nature's cure for man's monetary ills.