END_OF_DOCUMENT_TOKEN_TO_BE_REPLACED

GOLD PRICES fell again Thursday, testing the precious metal's post-Covid lows in US Dollar terms and sinking almost 3% for the week so far in Euros, before bouncing hard after the European Central Bank raised its deposit interest rate to zero, ending an 8-year run of negative rates.
Rallying above $1700 per ounce after falling to $1681 in Dollar terms, the gold price for US investors hadn't been lower since March 2021.
Gold priced in Euros meantime hit €1645 – the cheapest since mid-February this year – before rallying almost €30 per ounce following the ECB's widely-anticipated move up to 0% deposit interest rates.
Faced with a fresh political crisis in Italy – the 19-nation currency union's most heavily indebted government – the ECB today repeated that cash it receives from maturing bonds in its Pandemic QE program (PEPP) will be "reinvested flexibly", interpreted by analysts as meaning extra investment into Rome's sovereign debt, while it will also continue reinvesting money from its pre-Covid QE holdings (the APP) as well.
With gold paying no income while interest rates are now rising in most countries worldwide to try stemming inflation at 4-decade highs, Swiss bank UBS's wealth management unit this week cut its end-2022 gold price forecast to $1700 with a dip to $1600 now likely meantime.
Analysts at US finance giant Citigroup also see a possible drop in Dollar gold to $1600 before the end of the year.
The Euro currency today rallied to 2-week highs against the Dollar, back above $1.02 after falling beneath parity for the 1st time in 2 decades. 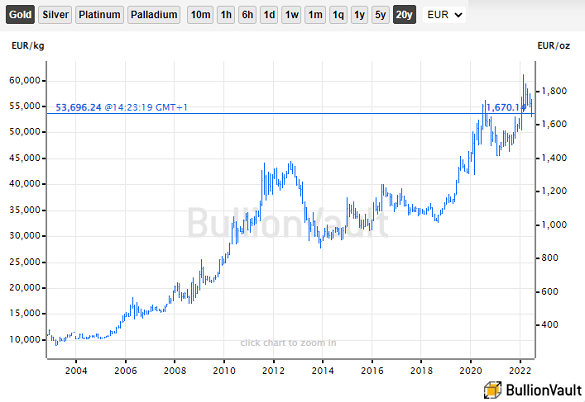 World No.2 economy China "won't resort to super large stimulus or excessive money printing" to rescue GDP growth sunk by the Communist regime's strict 'zero Covid' lockdowns, Premier Li Keqiang said this week amid the country's fast-worsening debt crisis in real estate and banking.
Beijing today widened the range of banking-scam victims it will repay in full, with depositors at 4 rural banks holding up to 100,000 Yuan now covered (US$14,750).
East-central city Zhengzhou has meantime launched a bail-out fund for local property developers hit by the increasingly nationwide "mortgage boycott" among home-buyers still awaiting or now having to live in unfinished apartments.
The Eurozone's 3rd largest economy, Italy today lost its Prime Minister, Mario Draghi, after the formerly left-leaning M5S party and the right-wing Forza Italia both refused to back the former ECB chief in a confidence vote over new spending plans, forcing an election most likely scheduled for September.
Vowing 10 years ago next week to "do whatever it takes" as President of the ECB to preserve the Eurozone union during the region's debt crisis, Draghi had previously led financial market, corporate legislation and privatiation reforms as Director General of the Italian Treasury during the 1990s.
Rome's benchmark borrowing costs jumped more than 1/5th of a percent on Thursday's political and ECB news, taking the 10-year BTP yield up to 3.70%.
While that badly lags Italy's rate of inflation, now at 35-year highs above 8% per annum, that widened the spread over comparable German Bund yields to 245 basis points, the strongest marker of bond-market anxiety regarding Italy's finances since June saw the BTP-Bund spread hit 2-year highs above 250.
Both of the world's 2 largest gold-backed ETF trust funds saw small outflows of investor cash again on Wednesday, shrinking the SPDR Gold Trust (NYSEArca: GLD) to the smallest since mid-January below 1.006 tonnes and taking the cheaper iShares product (NYSEArca: IAU) down to 504 tonnes, its smallest since early March.
After the iShares Silver Trust (NYSEArca: SLV) saw its first net inflow for almost a month on Monday, the giant silver ETF meantime shrank heavily again on Wednesday, following Tuesday's liquidation of 256 tonnes with a 195-tonne outflow to reach its smallest size in more than 2 years at 15,592 tonnes.
Like gold, silver priced in the Dollar also recovered most of this week's prior losses after the ECB decision on Thursday, reaching $18.65 per ounce.
World No.5 economy the UK last month paid a record sum in debt interest to government bondholders, new figures said this morning, due to payments on 'index-linked' Gilts ballooning as inflation on the old and now unofficial Retail Price Index hitting 4-decade highs in double-digits.
"We have got the highest taxes for 70 years and we have got lower debt than the United States, than Japan, than Canada. No other countries are raising taxes," says Tory-leader hopeful – and prospective UK Prime Minister – Liz Truss, standing on a platform of stimulus spending.
But "the No.1 economic priority we face as a country is inflation," says Rishi Sunak, her opponent in the race for 10 Downing Street, "and I wanna get a grip of inflation.
"[Only] once we've done that, I will deliver tax cuts."
RPI inflation last month reached 13.6% per year, the fastest pace since September 1980.
Back then, the Bank of England's base rate was set at 16.0%.
Last month the Bank raised its key interest rate by 25 basis points to 1.25%.
Re-touching August 2020's record high of £1580 per ounce after Russia began its war on Ukraine this March, the UK gold price in Pounds per ounce today erased half of this week's previous 2.3% loss to a 5-month low of £1405.
With the average UK gas and electric bill set to reach £3,300 this autumn – almost 10% of the typical household income before tax – "There's an increasing growth of people calling for non-payment of energy bills," said consumer-finance journalist and campaigner Martin Lewis on the UK's ITV last night, calling a plan from activists Don'tPayUK for 1 million households to withhold payment until energy tariffs are cut "civil unrest".