END_OF_DOCUMENT_TOKEN_TO_BE_REPLACED

GOLD PRICES leapt Thursday, spiking to new all-time highs in Euro terms and touching August 2020 levels in US Dollars as energy prices leapt and global stock markets sank on news of Russian troops invading Ukraine.
The price of oil and gas – of which Russia is a major producer – both jumped faster, breaching 7-year highs at $100 per barrel and jumping by 59% on the ICE exchange's Dutch TTF contracts respectively.
With March gold futures contracts on the CME exchange reaching a high of $1976 per ounce, spot gold prices – a reference point for London bullion, calculated from that Comex price and showing a mid-point between bid/ask quotes – came within $100 of their Covid Crisis' peak of $2075.
But that jump proved a spike, with the demand/supply balance in physical gold then causing the spot price to erase its entire gain from when Russia's President Putin announced his invasion overnight, sinking 3.1% into London's 3pm bullion auction. 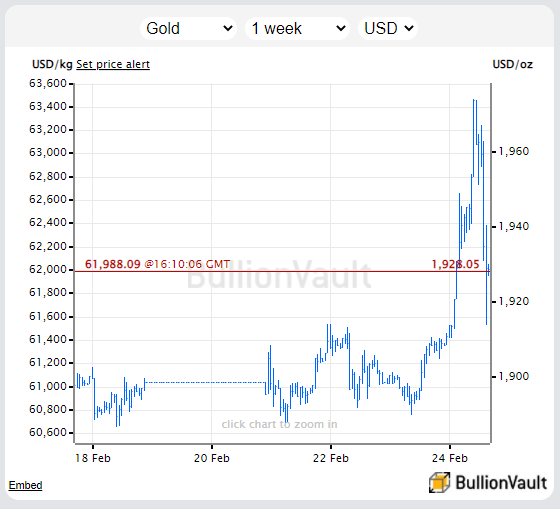 "We expect that gold prices will break through $2000/oz over the coming days if the conflict further escalates," said a note Thursday morning from French investment and bullion bank Natixis.
"We do not rule out that the important mark of $2000 will soon be exceeded," agreed German bullion refiners Heraeus, attributing the spike to "safe haven buying" and saying that "new highs would then only be a matter of time."
Global stock markets sank as Russian tanks crossed Ukraine's eastern, northern and southern borders, coming in from ally Belarus as well as the Crimea region already annexed by Moscow in 2014.
Prior to Putin's declaration, the MSCI World Index was already 10.1% below its all-time high – set on the first trading day of 2022.
Asian equities then lost around 2.0%, the EuroStoxx 600 fell 3.5%, and London's FTSE100 of mostly international corporations traded 3.9%, down to its lowest since start-December.
Major Western borrowing costs also fell hard, retreating to 1.92% per annum on Washington's 10-year debt and falling to the lowest in 3 weeks for Berlin at 0.13%.
Gold-backed ETFs had meantime expanded by 0.8% on Wednesday, with the giant SPDR Gold Trust (NYSEArca: GLD) reaching its largest number of shares in issue since the start of August last year.
Thursday's chaos in financial markets saw the US Dollar leap against the world's other major currencies, rising 1.4% on its trade-weighted index to the highest FX value since June 2020.
Combined with the rise in Comex and therefore 'spot' prices, that saw gold in terms of the Euro touch €1768 per ounce – almost €20 above August 2020's peak – before retreating below €1720 around the London bullion market's 3pm benchmarking.
The UK gold price in Pounds per ounce meantime hit £1473 – some £100 below its Covid Crisis peak – before sliding back 2.5% as London's physical market closed for the day.
The other major precious metals were more volatile still, with silver adding and then losing most of a $1 spike to $25.60 per ounce – its highest Dollar price since August last year.
Platinum also hit 8-month highs, peaking at $1130 before retracing $50 of its spike, while the price of palladium – of which Russia is the No.1 miner – jumped by more than $200 per ounce to touch its highest since last July.
"Tightening of sanctions could result in restricted availability," says Heraeus, forecasting that - if the Western allies do impose economic blockades against Russian exports, "the old high of $3000 should come back into sight for palladium."