END_OF_DOCUMENT_TOKEN_TO_BE_REPLACED

Too many in the gold sphere forget about that first thing when risk is high, and in August, 2020 it was at nosebleed levels.

Gold then started on the long road back to a low risk setup for much of 2022. Now the gold price is finally starting to validate that view, especially in its macro relationships.

These fundamentals are amplified for gold miners, which are businesses that leverage gold's standing among other more cyclical assets and considerations, like Energy, Materials and human resources (mining cost drivers).

In other words, gold mining as a sector generally shines fundamentally when inflation is low but also when market liquidity is low, driving down the options (stocks, commodities and other speculations) that probably 90+% of the investing world believes so strongly in relative to the barbarous relic.

I highlighted Bob Hoye's view of gold mining in a post-bubble contraction in a post on December 19th (via 321gold). While the last 20 years have foiled Bob's view of a post-bubble landscape (cue "the hero" Ben Beranke, QE and 7 years of ZIRP as a primary example along with radical policy that followed in his wake, as we gauged the oncoming bull in 2020) I have reason to believe – based on indications proprietary to NFTRH – that the Fed is going to be unable to come to the (inflationary) rescue this time; on the next hard stock market downturn.

It's not a perma-bear writing that; it's a guy who has had to be bullish when indicators had advised so over the last 20 years.

Those indicators are now either at extremes or busted on the big macro picture and one strong conclusion – assuming a neutered Fed – is yup, you guessed it, a real post-bubble environment this time. Full frontal Hoye, if you will.

Based on gold's severe and necessary decline in relation to stocks and commodities after the big bubble leg in those assets blown by the Powell Fed in 2020, the year-ago article also noted the following with respect to a big picture chart of the Gold/CRB ratio, one measure of gold's real price.

Good news for gold bugs? Risk is about a million times lower now than it was in the summer of 2020 as the ratio comes back on trend.

As for the big picture technical situation...

Today is a different story. I may be right or I may be wrong about 2022, but the original plan – after NFTRH got bullish the precious metals during 2020's Covid crash (as the Fed cooked up an epic inflationary operation) – was for this downward handle-making as part of a bullish Cup.

The Cup's handle (since distorted to the point where it went from sloppy to no longer a handle) represented the banishment of the monetary metal in favor of cyclical and inflation sensitive speculations of all kinds. Who needs a solid rock of value when you can make some coin in the casino the Fed erected out of inflationary policy? Gold did, however, retake the key 1700 level after plunging below it for a couple months and reversing hard to create a bear trap (of breakdown momo players).

Today let's look at one simple daily chart that shows an undeniable improvement in gold's relationships to other more inflation sensitive and cyclical assets. It means only everything to gold mining, and if the recent improvements shown below continue on to new trends then 2022 will have been the golden launch from positive fundamentals and intact technicals, and 2023 would ultimately be the golden (ie, overtly bullish) year.

We have a likely trend change in gold vs. stock markets, a bottom and upturn in gold/commodities (including significant miner cost input crude oil) and well what do you know? Maybe even a change in its trend vs. a gauge of inflation expectations. The macro started to change with Gold/SPX in January, 2022 and when it bottomed vs. commodities we took further bullish notice on the 'real', asset adjusted prices of gold. 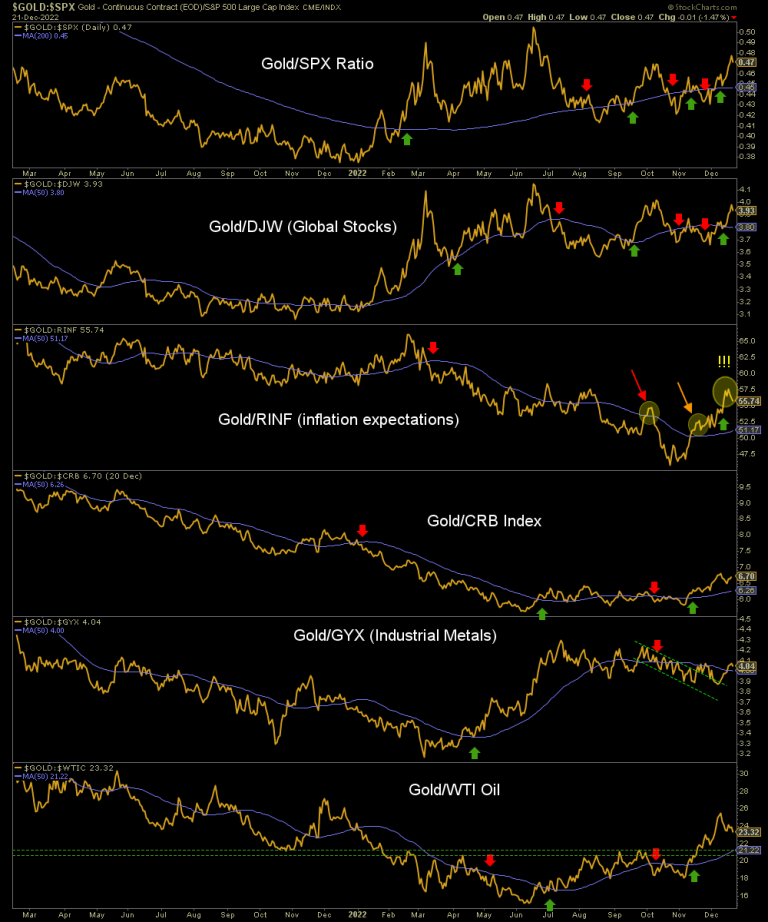 The projected bull case did not explode onto the scene in 2022, but the signals (including others beyond the scope of this article) indicate that it could be setting up.

If I am right about a Fed with its tentacles tied (it's a creature from an Island, after all) the false reasons used by gold promoters (inflation touts) for bullishness in gold and especially gold stocks will become obvious after 2022's launch and during 2023's bull move that would one day see a bewildered public (and their mainstream investment managers) chasing the sector after being surprised, due to all the misconceptions accumulated over 20 years of 'Inflation onDemand' by the Federal Reserve and its fellow central banks, which foiled every attempt by the markets to clear bubble excesses (ie, bring on a Hoyesque post-bubble contraction).

We have had an upside target for HUI far north of current levels since we projected the 2020 recovery and then a need for a correction by mid-year (hat tip to the Buffett indicator and 3 gold touts that amplified it to the public in a classic contrarian signal). 2022 sees the start of it and 2023, volatility and all, should see a move toward if not all the way to our upside target (for HUI, that subscribers are well aware of and the public has seen on rare occasion when mentioned on the public blog).

One wrinkle in our bull theme is that the precious metals complex is currently being led by silver (as we anticipated and tracked beginning last September, and it is attended by a resumed seasonal relief party in the broad indexes, anticipated and then called almost to the hour in an NFTRH+ subscriber update on December 20th). This positive relationship between gold and the cyclical world will not last in 2023 and a question remains about interim vulnerability in the gold miners when the broad markets unwind again.

But that concern is for another day (in Q1 or possibly H1, 2023). Today the precious metals are full participants in the Q4-Q1 seasonal relief rally we also called (in October) and have managed well since. Side note: watch the gaps and November 3rd lows as noted in that latest NFTRH+ update for subscribers.