END_OF_DOCUMENT_TOKEN_TO_BE_REPLACED

Cheaper than topsoil too. Yet the selling continues from gold mining investors...

I KNOW an investor who is feeling some regret, says Jeff Clark at Casey Research's Big Gold. He's come to the sinking conclusion that he may have made a mistake selling his gold mining stocks.

He recognizes now that he reacted emotionally to the crash, panicking at the plummet and dumping everything regardless of quality. He's kicking himself for doing so, because he succumbed to an impulsive move, locked in a loss, and realizes that the core reasons for owning gold haven't really changed.

Obviously some investors believe they made the correct move by exiting the sector; they're convinced gold is a dead trade and will be a losing investment going forward. My investor friend thought so too for a time, but now thinks he may have acted too hastily.

I think sellers abandoned gold mining equities prematurely on weak grounds, and will be back when that becomes obvious, joined by even bigger numbers of new investors.

The ultimate issue with gold stocks is whether gold itself will rise or fall. If it rises, gold stocks will get pulled up by the metal – and then deliver the leverage they have so many times in the past. If it falls, even today's profitable producers will suffer.

There are key reasons why I think gold's trend will resume its upward course, and why sellers should've paid a little more attention to the "advertising" before dumping their shares...

Misleading Advertising
A report issued by the Congressional Budget Office says that President Obama vastly overstated the spending cuts and deficit reduction his budget plan would produce, while considerably undercounting the level of tax hikes the program would require. Obama claimed the program would reduce deficits by almost $2 trillion; however, the CBO states that Obama's budget will reduce deficits by only $1.1 trillion in the short term, and forecasts annual deficits would start to rise again after 2017. And this only if you believe government numbers.

On the debt side, Brent Johnson, founder of the Santiago Gold Fund, shows just how unsustainable this path has become. 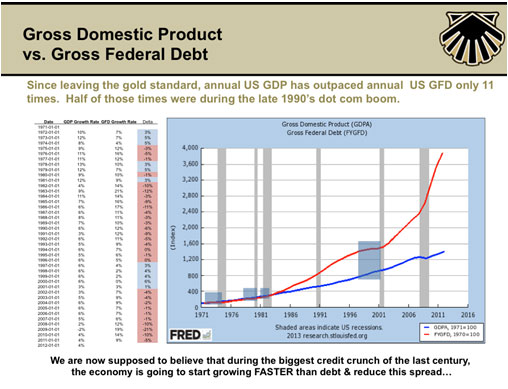 The gap between GDP and debt is widening at an untenable pace. While we think this leads to inflation, it is the fallout from this unsustainable path that we're convinced will lead to a widespread flight into gold.

Subliminal Advertising
Unbeknown to many investors, central bank buying represents roughly 12% of all gold demand. How they reacted to the April selloff would provide insight into whether this important trend is slowing or growing...

Despite the drop in the gold price, demand from the central banks of emerging countries isn't slowing. You don't have to be Nostradamus to see the writing on the wall with debt and currency dilution. As Grant Williams points out in this video (gold comments begin at the 33:30 mark), if emerging-market countries raised their gold reserves from the current average of 2.6% to 15%, it would require 17,359 tonnes of gold (558.1 million ounces). This is roughly seven years of global production – which is almost certainly a low estimate given the fact that China and Russia don't export metal.

Guerrilla Advertising
There's been a lot of data about how the crash in gold was met with a rush by physical buyers. This data point may top them all.

When the gold price fell off a cliff in April, volume on the Shanghai Gold Exchange quadrupled. 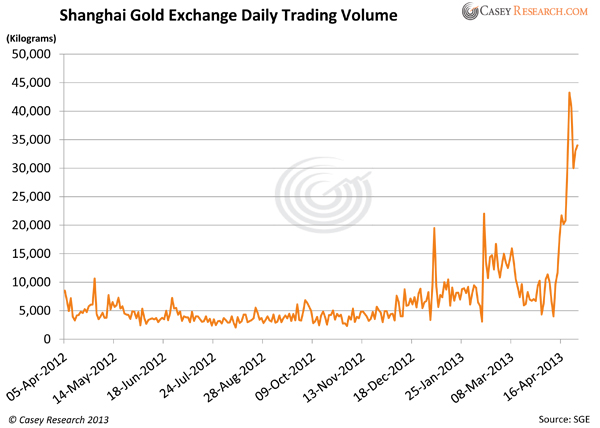 Clearly many investors around the world saw gold's unexpected decline as a sale. This is not the behavior associated with a trend that is over – just the opposite, in fact.

Data-Driven Advertising
Naturally, if the gold price is down, the assets of producers are worth less than they are at higher prices. But as with all crashes, stock prices overshoot, and gold equities have been no exception. In fact, we demonstrated in the May edition of BIG GOLD that gold stocks are cheaper than dirt.

To compare apples to apples, we converted dirt, compost, and mulch from yards (how it's usually sold) to tonnes, also getting a price per tonne.

Here's one example of what we found (calculation done on April 22).

It's amazing, but Goldcorp is literally priced lower than top-quality dirt, compost, and mulch.

As Rick Rule told us three weeks ago, sometimes things get cheap enough, even if you worry there might be another "sale" two weeks from now: "When goods that you want to own are attractively priced, you buy them."

I think it's safe to say gold stocks are attractively priced. And in the latest BIG GOLD, we'll tell you exactly what we're buying, and if we think the low is in for gold.

The bottom line for us is that while the Fed's efforts may seem to have some positive effects on certain aspects of the economy, there is no free lunch. Concluding that there will be no negative fallout from decades of government profligacy around the world is short-sighted.

The market is trying to flush out weak and hasty investors. Don't fall for it. Someday, perhaps not too long from now, I think we'll have reason to celebrate that buyer's glee beats seller's remorse.