END_OF_DOCUMENT_TOKEN_TO_BE_REPLACED

Ice, slice and a gossip as the London bullion market goes to Vienna...
CONFERENCE season has started in the wholesale metals market, writes Adrian Ash at BullionVault, kicking off Monday in London with LME Week and moving to Vienna for the LBMA's gold, silver and platinum-group conference this weekend.
Will anyone's liver will make it as far as next month's IPMI conference in Frankfurt?
Conferences give people lots of scope to gossip. Especially if there's the lure of a drink between the speeches. And especially if journalists are attending too.
So Monday's start to LME Week here in London gave the perfect chance for "sources" – two of them, according to Reuters – to claim that Japanese conglomerate Mitsui is closing its London and Hong Kong precious metals trading divisions.
Never mind that LME Week is really about base metals. The London Metals Exchange wants to grow its precious metals offerings (it currently runs the daily platinum and palladium price benchmarks for the London Bullion Market Association). And lots of the same people work in trading both useful copper and "useless" gold.
The rumour has now been confirmed. Parent company Mitsui & Co. blames profitability. Pundits and journalists point to regulatory scrutiny and "ongoing" investigations. We note again that 1 case of 1 trader stiffing 1 client on 1 day has so far been proven across the entire wholesale precious metals market – a quite remarkable feat.
Take that fact as you will. Regulation continues to enjoy a bull run regardless, adding hassles and costs whether the bullion market is "guilty" or not. And neither low prices, weak trading, nor broader suspicions about trader behaviour show any sign of backing off soon. So you can expect more such rumours to become fact, starting perhaps when the metals markets exit London's pubs, only to start a new bar tab in Vienna's Hilton hotel as the action moves to the LBMA conference this weekend.
LME Week warrants a stiff chaser by all accounts. Because after a half-decade of nasty price falls, a glut of huge over-supply still faces copper, steel, aluminium and the rest thanks to China's slowing growth.
The inevitable (if unforeseen) downturn in the "commodity supercycle" also means credit risk and counterparty default have been hot topics at this week's premier event for base metals producers and traders worldwide – including lots of the same bank executives, analysts and market participants working in gold, silver, platinum and palladium.
So conference season's most important rumour this year – long term – is where prices might be heading from here. And luckily, gauging what LBMA conference delegates of miners, refiners, bankers, traders, analysts, exchanges, processors, wholesalers, shippers, jewelers and retailers are thinking is condensed into one handy number: the attendees' average guess for where prices will stand by the time of the next LBMA conference one year from now (Singapore, since you ask). 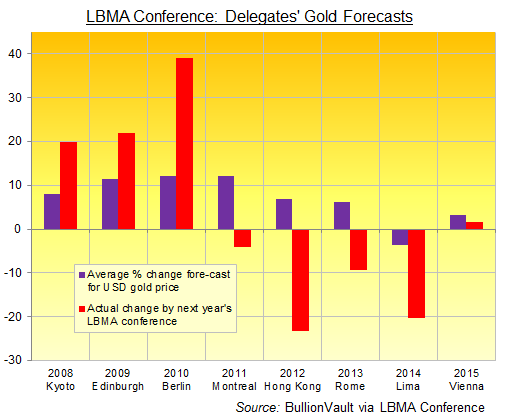 We noted this nice little tradition of LBMA crystal balls – and what they may reveal – from the 2013 conference in Rome.
And as you can see, the delegates' average forecast doesn't point to where prices will go, but to where prices have been instead. Because like anyone else asked to predict the future about anything, the massed ranks of market insiders have tended to see what just happened running ahead.
The LBMA conference badly lagged the peaks of 2008-2011...only to badly lag the crash and fresh falls since then. This year so far has seen prices rise, fall and now rally again pretty much to where they started 2015. So what might the average metals-market insider forecast for 2016 next week?
Check back with GoldNews for updates from the LBMA conference on Monday and Tuesday – plus all the gossip that's fit to post. Just don't expect anything about "manipulation", not even with prices running so much lower and then sharply higher in recent weeks. First because no one actually trading the wholesale market buys the idea of a long-term price suppression scheme. Second because anyone inside the market must of course be part of the conspiracy anyway, and will keep schtum between laughing – mwah-ha-ha-ha! – into the foam on their Märzenbier.
Trader-room chit-chat, however, already says that what the bug-o-sphere should call "naked longs" are in truth behind this latest rally, betting gold will rise further and so taking prices higher in the futures and options market of "paper gold".
Physical buyers, in contrast, have been sitting this out so far, with Asian wholesale demand "pretty average" according to one dealing desk, even with India's huge Diwali shopping spree coming next month. Western ETF gold holdings have meantime edged higher at last – but one day only so far, and only to what were new 8-year lows in the summer. Investors using BullionVault, the world's largest physical gold and silver exchange online, are meantime sitting on their hands – net net – after turning slight sellers overall on this rise.
As for the key Chinese market, now the world's biggest destination for physical gold, prices have slipped below the international benchmark of gold settled in London, dropping to a $1.50 discount per ounce against an average $2.50 premium over the last 12 months. So new imports will be deterred short term. Because it's the Shanghai premium which, thanks to the magic of profit-seeking capitalism, draws in metal from abroad. (Well, usually.)
China and its gold market will of course loom large at the annual LBMA conference. Perhaps there will even be debate of the lunatic idea that, if only Chinese traders had more "control" over how prices are determined, those prices would somehow shoot higher!
Central bank demand will also loom large...no doubt with a little scuttle-butt away from the speakers' podium given German-speaking Europe's interest in 'repatriation', vault audits (or tally counts), and monetary independence.
Coin demand – and the shortages talked up by government mints and retailers – will maybe feature as well. But miner hedging, I think, will prove a much bigger subject for conversation and rumour. Because after the summer's new multi-year lows in gold and silver, this rally so far might offer producers one last chance...in their finance directors' eyes at least...to book forward sales the right side of $1180 and $16 per ounce.
But the really, really hot topic? Regulation, regulation, regulation. Again, no-one at the LBMA conference holds any store by the various accusations of "manipulation" (what a surprise!). But the background noise that topic has created for regulators, politicians and ambulance-chasers is drowning out the market's own voice in running its own affairs.
Sadly for the professional market, it has seen its business as its own affair for too long...inviting claims of 'closed shop' and possibly collusive behaviour which people outside, especially those who don't understand how markets work, jump to assume must be both true and bad. And sadly for pretty much everyone beyond the regulators, lawyers and lobbyists, it risks making for very, very boring speeches and gossip too, as they fight to re-write how the rest of the world thinks the bullion market "should" work, rather than simply letting investors get involved.
Either way, big changes are rumoured to be afoot, ready or not. Some players don't wish to play anymore. This week's factual rumour of Mitsui quitting London and New York might prove just a whisper of the rumours to come.
To repeat: This trend is not good news. Markets need market makers – willing to quote firm prices to buy and to sell – and the more the better. Fewer participants risks less competition, wider spreads, and lower trading volumes. So this is also bad news – in terms of cost and liquidity – for longer-term investors as well. Wider spreads in the wholesale market risk hurting even retail prices (yes, even on the 10-45% spreads already charged to coin buyers), both directly and by hurting the margins which retailers can make.
But further ahead, and noting the hot topics from base metals' LME Week, the pain of this "commodity cycle" – as it turns like all cycles do – marks a necessary step in swinging down to the bottom, and reaching the next upturn. It's only when patience wears thin, and big players throw in the towel, that the true lows, the real nadir, might be in.
How's that for gossip? The real rumour – the one that matters – is the whisper which silver and now gold are quietly spreading about the trouble ahead for other financial assets.