END_OF_DOCUMENT_TOKEN_TO_BE_REPLACED

India needs gold, wants it, loves it. But where to find it with imports banned...?
WHERE were we? Oh yes, trust and independence, writes Adrian Ash at BullionVault – the key themes at this year's LBMA/LPPM precious metals conference.
Indian temples and Italy's central bank have lots in common when it comes to gold. Both are sitting on plenty (3,500 if not 8,000 tonnes or more in the former, and 2,451 tonnes for the Banca). Both have found their governments wanting to "use" that gold to smooth out trouble in the wider economy ( Hindu temples today, Italy in 2009). Both have – to date – declined to help. And for India's temples as for the Banca d'Italia, keeping hold of that gold speaks to two key issues: trust and independence.
Gold is "unique amongst safe assets," said the Bank of Italy's director general, Salvatore Rossi, at the top of the LBMA's conference in Rome this month. Because it is not "issued" by anyone. So it cannot be devalued or controlled by government, not in the way that, say, paper money can be exploited to boost the economy's output but at the cost of rising inflation.
Rossi's speech was note-perfect as an example of central-bank speak. But so diplomatic as to lack all controversy, the Bank of Italy chief actually made a statement so loud no one could hear it. Or so we thought.
Italy's central-bank gold is what keeps it independent of politicians. Gold acts as the bedrock of that trust which the public must put in the central bank – unelected, and so untainted by politics – to avoid creating inflation by fearing it.
Too philosophical a reading? Perhaps. But contrast the trust and independence issues for India's temples. Just like Indian households, they're finding that the government's 2013 ban on gold imports – imposed to try and cut the country's huge trade deficit – will see them short of the new gold they'd normally expect this festive season. Peaking next week with Dhanteras, the first day of Diwali, gift-giving has run into a historic gold shortage. There simply isn't enough gold flowing into the world's heaviest buyer to meet seasonal demand.
Good, says the government. "India, as we all know, already wastes far too high a proportion of her resources in the needless accumulation of the precious metals," as a certain economist, John Maynard Keynes, wrote in his first policy paper 100 years ago. That argument hasn't changed, but Keynes was in truth repeating a view running from ancient Rome's Pliny the Elder to Karl Marx and Victorian economist William Stanley Jevons, who also called India " the sink of the world" for silver and gold.
Keynes in 1913 said India needed to quit this "uncivilized and wasteful habit". Rajiv Takru, India's financial services secretary today, called buying gold "wasteful expenditure" in June 2013. So why do Indian households buy (and gift) so much of the stuff?
Because they've got to do something... 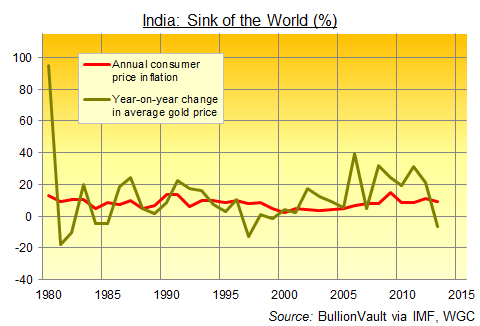 Incredibly, and despite being the biggest topic of sober conversation at the conference hotel, dinners and drinks, the government clampdown on gold imports (banning credit, banning coins, hiking duty to 10%, forcing re-export of 20% of all new shipments) went almost entirely undiscussed on the podium in Rome at this year's LBMA shindig.
Yes, C.K.Venkataraman, CEO of the giant Titan Industries, shared insights and examples from marketing jewelry to Indian households. But out of 57 speakers, and with the global bullion market facing a shutdown by its #1 consumer, only Shekhar Bhandari – executive vice president of Kotak Mahindra Bank – addressed the issue head on, and from the inside.
Bhandari, like the mass of refiners, brokers and secure transport providers making up the 700-strong LBMA delegates this year, clearly won't make much from India's gold love if the entire trade goes underground. Which it will, only too quickly, if the government persists with the imports ban as it is. But unlike the Western attendees, however, India's formal banking and bullion industry can at least recoup some of the revenues lost to smugglers if it helps unlock – or "mobilize" – all that gold already inside the country. Which totals perhaps 16,000 if not 20,000 tonnes on best estimates. Which is at least 10% of all the gold ever mined in history. Because like Pliny the Elder said, India's been sucking the stuff in for a very long time.
"The biggest avenue the government has to monetise gold," Bhandari told Reuters a month before the LBMA conference, "is the gold deposit scheme." It would see households (or perhaps temples) put their gold items on deposit, in return for a rate of interest. "That has the maximum potential and [would encourage] recurring behaviour."
But what about trust? Indians buy gold because they don't trust their government not to damage their best interests, most notably through the persistently weak Rupee. To retain financial independence, Indians buy gold today just as they have throughout history. Because whilst its price can be volatile, it tends to beat official inflation. It can't be inflated like the all-too paper Rupee. And it can of course be hidden – hung around a wrist or ankle here, stuffed under a floorboard there – to escape the government's ever-eager taxation of wealth.
India's rich Hindu temples offer an alternative. Because if private citizens won't help the nation, perhaps the largest private institution will instead? Clearly this is being discussed, between banks and government if not with the temples themselves. Kotak's Bhandari told the LBMA conference that temple gold, if mobilized through a government-guaranteed deposit scheme, could meet India's domestic consumer demand for a decade. But again, there are big issues of trust and independence to fix first. Bhandari separately told one speaker that could be achieved in 3 years. But getting India's faithful to allow their local temples to offer the gold gifts it's received...and getting those holy items smelted and recast into kilobars for jewelers to rework into bangles and bracelets...looks a might big task.
Meantime, that 10% import duty on gold – even if legal inflows do pick up at some point – offers a huge incentive to smugglers all around India's borders. And even with the big crash of 2013, gold prices remain high by historical standards.
How high has also become a key theme for the precious metals market in 2013. Trust and independence loom largest there, perhaps, as we'll see in our fourth and final part next week...