END_OF_DOCUMENT_TOKEN_TO_BE_REPLACED

Gold loved today's awful US jobs data. It could love Fed tapering still more...
WELL, this throws a monkey wrench in the works, writes Adrian Ash at BullionVault.
The very same month that the US Federal Reserve took its cue from lower unemployment to start tapering its money-printing program, US unemployment fell to a 5-year low of 6.7%.
So far, so good. That's below the 7.0% level by which Fed chairman Ben Bernanke said tapering might be all done in mid-2014. It's also a good way towards the Fed's 6.5% line-in-the-sand for daring to think about raising interest rates from their half-decade flatline at zero, too.
Higher rates, lower gold, or so things typically run (net of inflation). Yet gold prices jumped on Friday's news...reversing the week's earlier 1.5% drop to close London at $1245 per ounce, its best weekly finish since November...back before the Fed finally found its bottle and made good on the tapering it had promised it would do in September.
Why? Because net hiring sank last month, down to just 74,000 for an 18-month low...less than half the past 4 years' average...and the worst December since 2009.
Hiring down, joblessness down. How about that?

"A few participants," said minutes from the Fed's December meeting, released this week, "noted the risk that the persistent weakness in labor force participation and low rates of productivity growth might indicate lasting structural economic damage from the financial crisis and ensuing recession."

Participation in the labor market fell in October to a 35-year low of 62.5%. It fell there again in December's data as job seekers quit seeking, just as the US Fed started trimming $10 billion from its monthly QE money-printing.
Fact: Ten billion is a lot of money. All the software developers in all the world made a total of $10bn from all the app sales on Apple's App Store in calendar-year 2013.
Fact: That still leaves $75bn to be printed and spent in January...greater even than the entire underground mineral wealth of Peru, the third-largest producer of copper, silver, zinc and tin, and the sixth-largest gold mining nation.
Indeed, at its most valuable in late 2011 and 2012, the entire SPDR Gold Trust (NYSE:GLD), the New York-listed gold trust, was briefly worth some $75bn. Back then, the GLD was the most highly valued ETF in the world. The US central bank is now creating that much money, from nowhere, and spending it to support US debt prices this month alone as 2014 begins.
And they call it tapering... 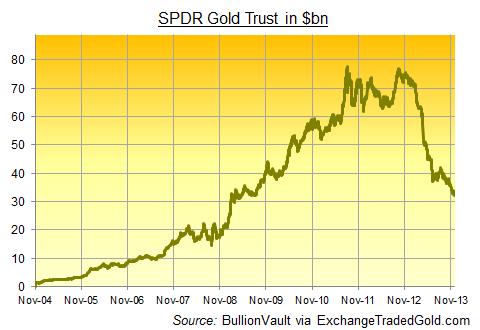 Still, $10 billion here, $10bn there, and pretty soon you're talking real money. Or rather its "electronic equivalent" as Ben Bernanke, the current Fed chair, put it in his famous 2002 speech on making sure deflation doesn't happen in the US.
Quantitative easing, as a reminder, means "easing with quantity". Specifically, it means easing long-term interest rates, way out on 10-year and 20-year loans where the Fed doesn't usually play. And easing them by way of quantity (as in trillions) of new money, created from nowhere, and spent buying government bonds and mortgage debt to boost debt prices. Because that pushes down their interest rates as a percentage (known as the "yield"). Easing with quantity.
Forget about the impact on the economy. We can't even say whether QE worked to cut interest rates or not. Because we don't know what would have happened without it. But now it's being "tapered" (with that $10bn here and maybe $10bn there), longer-term interest rates have reached a significant point. Ben Bernanke stands aside next month. He may end his time as Fed chairman at the very same point that a 30-year trend in US (and global) interest rates hits the skids too. Ten-year US bond yields are perilously close to breaking out of their long-term downtrend. Meaning US government bond prices stand on the edge of ending their 30-year rise.
Cutting QE support means letting bond prices fall. Which means letting bond yields rise. Three per cent on the 10-year Treasury is a line in the sand which the Fed hasn't drawn. Not yet in public. But we guess that increasing the pace of money-printing, instead of tapering it, will top the agenda every time the US economy now sneezes.
What's good for bonds is good for gold remember. Lower rates, higher prices, and vice versa (net of inflation of course). Ten-year yields have risen more than one percentage point from New Year 2013, denting US government bond prices enough for Uncle Sam's debt to come second-last in our Annual Asset Performance Comparison for last year.
Down at the bottom came gold. And here's the rub. The fact of tapering, we think, rather than the idea, could actually prove bullish for gold longer term. Yes, really. Here's why.
For portfolio managers and big-money allocations, the QE Trade (2008-2011) was built on the fear of deflation first, then inflation. Printing money signalled that falling prices in the economy, and a credit collapse, were the imminent risk. Think Japan 1990-to-today. So buy government bonds, investment managers thought. "The Fed is so scared, it's printing money to buy bonds!"
But printing money is also inflationary long term. "So after the bonds, buy gold, the ultimate inflation hedge!"
Only, why wait?
Thus the QE Trade was to buy bonds, buy gold, and then take to your yacht as money-printing worked its magic. It worked a treat too, as our Annual Asset Performance Table shows. Gold and bonds rose as everything else sank. And the more money was printed, the more the QE Trade gained new buyers for bonds and gold.
Lots of people got confused over this. Big brain Hugh Hendry accused his fellow fund managers of "jumping to the end of the story", and buying gold before the deflation was done. NYU economist Nouriel Roubini didn't get it either, asking why-in-the-hell gold was rising when there wasn't any inflation in consumer prices.
Back then, in 2009, we thought gold was rising because it offered deflation protection, as well as defense against inflation. Which is true. Physical gold cannot be destroyed, unlike credit or stock market shares. But the real driver, we now realize, was in truth how big-money investors saw the metal. And for them, it was one half of the QE Trade. Deflation first, inflation after. Buy bonds, buy gold.
Now, the "extraordinary measure" of creating money to save the world from financial collapse hit its peak in late 2012. The Bernanke Fed hiked its monthly asset purchases to $85bn, an absurd number for an absurd policy. Like gold, however, government bonds had grown stale for the money-managing community. The financial crisis itself was a half-decade old. So the story of crisis, and the narrative of QE, had grown tiresome too. "Buy bonds and gold? How passé!"
Meantime, the Fed also began making noises about trimming its QE money creation. Taper talk steadily built to a mutter and then a grumble and then a monthly forecast, every time the Fed prepared to meet and set policy, and every time new US data was released (most notably Non-Farm Payrolls).
All this talk of tapering, QE, joblessness and Bernanke moving on from the Fed begs the question, however. If the United States isn't out of the woods, then more money-printing is certain to follow. And if it is, then deflation is over. Meaning perhaps that the second leg of the QE Trade can now come to the fore. Because all the money created on Bernanke's electronic equivalent of the printing press so far is still with us. Frozen in banking reserves so far, it's no longer weighing against the risk of falling prices in the economy. Or so the blunt logic of 6.7% jobless rates and QE tapering suggests.
Bonds and gold weren't supposed to rise together, not according to Hendry, Roubini and the rest. So if bonds are to go down as QE is reduced, what then?