END_OF_DOCUMENT_TOKEN_TO_BE_REPLACED

...and back...8 times in total...
GOLD is famously ductile, meaning it can stretch into a very thin, very long wire, writes Adrian Ash at BullionVault.
Just how long depends on how much you've got and how thin you stretch it. (There's also metallurgy lab' debate over gold beating platinum as the most ductile metal, too). Drawn out to a width of 20 um (that's microns, so 1/200th of a millimeter) one expert estimate says one gram of gold would stretch 165 meters...some 541 feet.
That means your gold could reach to the Moon...and back...more than 8 times...
...if only you had 38 metric tonnes of the stuff...
...which is how much gold BullionVault users now own in total between them – a new record for private investors using the world's No.1 precious metals market online. 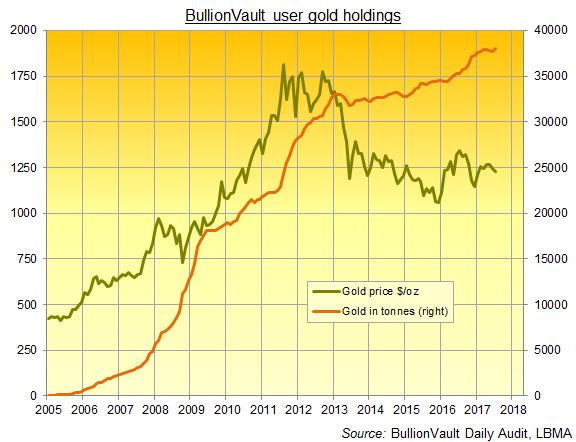 Seizing this month's drop in prices as an opportunity to buy, BullionVault users as a group have added over a quarter of a tonne to their aggregate holdings of gold in the first two weeks of July.
That more than reverses the previous 3 months of light liquidation, when more active customers took a profit as underlying gold prices pushed towards their highest level since Donald Trump won the US presidential election last November.
Year-over-year today – and securely vaulted in each client's choice of London, New York, Singapore, Toronto or (most popular) Zurich in Switzerland – our customers have grown their total gold holdings eight per cent from this time in July 2016.
Outweighing most countries'  central-bank holdings, their 38-tonne private holding is enough to make more than 10 million 18-carat wedding rings. It could supply the microchips for 1.5 billion iPhones.
BullionVault users have also now grown their holdings of silver to 680 tonnes, almost 13% greater from July 2016 and enough to make the Wimbledon Ladies' Singles Trophy – the large silver salva known as the Venus Rosewater Dish – 319,303 times over.
Again, that marks a new record for users of BullionVault's award-winning and world-beating, simple, secure and low-cost service.
Of course, choosing our service is a smart move we believe. Hence BullionVault's market dominance for self-directed investors wanting instant settlement of physical bullion with daily proof that their metal is what and where it should be, in full.
But will buying so much bullion on this summer's price drop also prove clever as well?
Professional money managers think not. Shareholdings in trust-fund ETF the GLD have shrunk this week to the smallest since New Year. Hedge funds have slashed their bullish betting on Comex futures and options to the lowest since start-January too, and turned very nearly bearish on silver derivatives overall.
But 10 years to the month since the financial crisis began to get noticed, investing in precious is only becoming more popular amongst private individuals trying to defend and grow their own savings.
And shorter term, here's 3 reasons why making like BullionVault users – and taking advantage of this month's price drop – could look wise as the autumn arrives:
#1. Gold's seasonal pattern
Gold prices tend to rally in the autumn after easing back over the summer months. For UK investors for instance, gold has ended December higher than its summer lows 16 times in the last 20 years. Analysis puts this down to a mix of 'Sell in May' (similar to the stock market) plus lower seasonal demand from China and especially India. Diwali doesn't start until mid-October this year; some Hindu calendars now have no auspicious days for weddings until November.
#2. Interest-rate expectations
Gold tends to do well when other assets do badly, but it does best of all when people lose faith in central bankers. Gold and silver are highly likely to rise sharply if the sudden consensus that the ECB and even Bank of England might join the Fed in cutting back stimulus evaporates just as quickly as it came when they disappoint.
#3. That 'hot money' betting
Hedge funds have turned against gold at the fastest pace since current positioning records on Comex gold futures and options began in 2006, with the 'Managed Money' category of speculators slashing its net bullish bets 78% in the month to last Tuesday. Last week those traders held more short bets than any time since gold began its recovery from 6-year lows at the start of 2016, with the fewest bullish bets since March 2017. So again, as in point two, the speed with which hedge funds and other hot-money traders have turned against gold suggests the reversal could be frantic.
None of this guarantees gold or silver will rally sharply from here, nor that interest rates won't rise instead – handing the Comex speculators the big leveraged gains they're betting on. Gold and silver pay nothing in interest, remember. The mere expectation that cash rates and bond yields will rise can dent prices.
But with investing in US equities and other developed-world stock markets now costing more than even the Tech Stock top in terms of average incomes, spreading your risk with a little physical gold or silver might come to look as smart in the future as it did so quickly a decade ago.
And besides, the world's largest single hoard of privately-owned bullion can't all be wrong, right?