END_OF_DOCUMENT_TOKEN_TO_BE_REPLACED

But war-plus-inflation still lags GFC or pandemic demand...
The FASTEST jump in new gold investing since the Covid pandemic took hold last month outweighed near-record investor selling at all-time high prices, writes Adrian Ash at BullionVault.
But while gold has again come into its own in a time of crisis – rising as stock markets fall against the backdrop of inflation and the catastrophe in Ukraine – investment demand continues to lag the peak inflows to gold of the Covid Crisis and the global financial crisis.
Profit-taking in gold accelerated in March in fact, with a near-record number of private investors selling on BullionVault, the world's largest online and smartphone platform for physical precious metals trading.
But investor sales were outweighed by a jump in demand, led by a surge in new first-time buyers as prices hit new or near all-time highs against the world's major currencies amid worsening inflation and Russia's invasion of Ukraine.
Now caring for $4.0 billion in precious metals (£3.0bn, €3.6bn, ¥483bn) for more than 100,000 users from 175 countries, BullionVault saw the number of people choosing to buy securely stored and insured gold rise 54.3% in March, the fastest monthly jump since the Covid Crisis began 2 years earlier, to reach the highest count since last June.
The number of sellers rose less quickly, growing by 22.8% to reach its highest count since the record of August 2011, peak of gold's global-financial-crisis bull market.
Together that raised the Gold Investor Index – a unique measure of private investment behaviour in physical bullion – by 2.0 points from February's 32-month low, reaching its highest reading since December 2021 at 53.9 with the steepest monthly rise in 9 months.
The Gold Investor Index would read 50.0 if the number of sellers across the month exactly matched the number of buyers. It peaked at 65.9 when the Covid Crisis took hold in March 2020 and set a series record of 71.7 in August 2011. 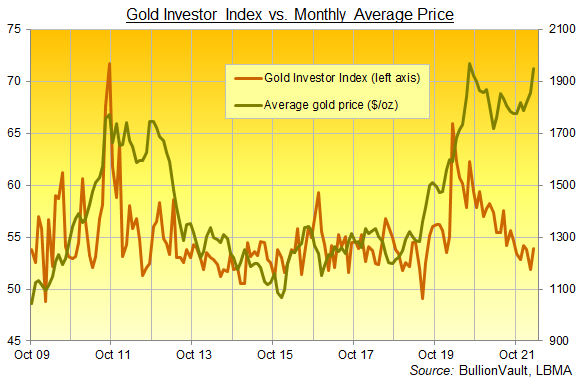 Last month's spike in gold prices was followed by a swift correction as the financial markets' initial shock at Russia's invasion receded. The retreat in gold prices has invited fresh demand from both existing and new investors wanting to diversify their portfolios with defensive assets.
Across the first 3 months of 2022 gold rose 7.5% in Dollar terms while global equities lost 5.5% on the MSCI World Index.
On 8th March gold priced in US Dollars peaked at $2070 per ounce, $5 below summer 2020's all-time high, and the precious metal hit new all-time highs in most other major currencies – including the British Pound at £1580 and the Euro at €1900 – before dropping to show a month-average price below $1950 (£1479, €1767).
At BullionVault, the number of investors opening an account and buying precious metals for the first time jumped to a 10-month high, up 76.5% from February's 5-month low with the fastest rise since March 2020.
That rebound was led by a 56.8% rise in new UK users, a surge of 142.1% in new US users, and a jump of 108% in new French users.
New interest among BullionVault's 10 largest national markets saw the fastest percentage move in Austria, jumping by 225.0%.
Net of customer selling, BullionVault clients' gold holdings – stored and insured in each user's choice of London, New York, Singapore, Toronto or most popular Zurich – grew 0.1% by weight in March from February's 10-month low to reach 47.0 tonnes, reversing 53 kilograms of the previous 6 months' 721 kilo liquidation.
Silver holdings meantime shrank for the 3rd month in six, an unprecedented run of liquidation in the gray metal, led by Eurozone investors taking profit at the highest month-average price since January 2013 at €22.91 per ounce.
Priced in the Dollar, silver rose 7.6% in March to average an 8-month high of $25.24, and it rose 10.5% in British Pounds to set a 9-month high of £19.16 per ounce.
Down 1.1% by weight for the month, BullionVault client stockpiles ended March at 1,214 tonnes, the smallest since May last year. 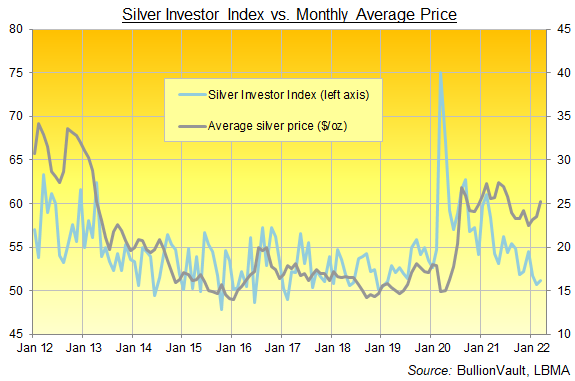 Silver's weaker balance of buying versus selling saw the Silver Investor Index rise by only half-a-point from February's 37-month low, reading 51.2 as the number of buyers rose 52.1% from February's 2-year low to the most since August, while the number of sellers on BullionVault rose 46.0% to the most since in 13 months.
Bottom line?
With inflation and the Ukraine crisis dominating the headlines, new interest in precious metals has jumped at the fastest pace since the start of the pandemic, but there isn't any panic or rush into vaulted bullion right now.
Profit taking and rebalancing among existing investors is running strong, leaving the market pretty much balanced overall.
Attachments: