END_OF_DOCUMENT_TOKEN_TO_BE_REPLACED

13-month gold price high spurs investor selling...
GOLD INVESTING loves dreadful news, writes Adrian Ash at BullionVault.
Or so you might think looking at the precious metal's price spike on Russia's invasion of Ukraine last week.
But while speculative trading in gold derivatives has jumped, physical investing says that the market has got ahead of its underlying trend. And rather than spurring a rush for gold among Western investors in fact, the jump in gold prices has seen net demand for physical bullion fall to the lowest since mid-2019.
Putin's invasion, together with falling stock markets and fresh multi-decade highs in inflation, saw gold's month-average price rise 2.1% in February, reaching the highest since New Year 2021 at $1856 per ounce.
Gold has only averaged a higher US Dollar or UK Pound price in 5 months before, all of them during the Covid pandemic, and it has only been higher in Euro terms once.
That has spurred profit-taking among existing owners of gold bullion while also deterring new investment, with net selling on BullionVault reaching more than one-third of a tonne, the heaviest liquidation since June 2019.
The Gold Investor Index dropped 1.9 points to 51.9, also its lowest reading since June 2019, as the number of people choosing to sell rose and the number of buyers fell.
A reading below 50.0 would indicate a greater number of sellers than buyers across the month. March 2020's Covid Crisis saw the Gold Investor Index peak at a decade-high of 65.9. 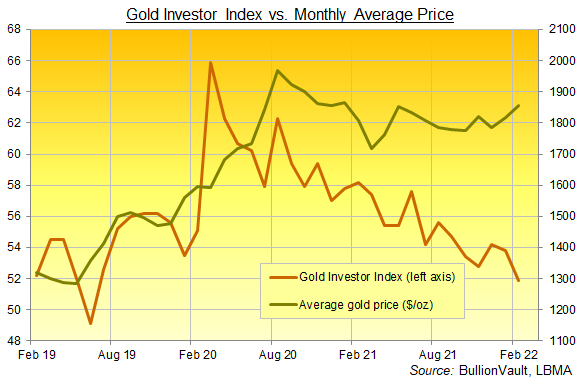 Cashing in on crisis? Not quite.
History is littered with military conflicts and political turmoil where bullion investment prices didn't respond at all. See for instance the spot gold price's lacklustre response to both early 2008's assault by Russia on South Ossetia and then the 2011 Arab Spring.
History also shows plenty of conflict and violence where gold prices did rise, but only briefly and only to resume an underlying downtrend (see, for instance, Russia's early-2014 invasion and annexation of Ukraine's Crimea region). Then there are periods when geopolitical tensions actually saw gold prices retreat within a deeper uptrend ( North Korea's 2017 missile tests for example).
More consistently, what has tended to matter is whether conflict or turmoil hit Western financial markets. Because while gold, in the end, cannot protect you from cluster bombs or a deadly virus, it often acts as investment insurance, offsetting losses in other, more typically profitable assets.
Falling stock markets go hand-in-hand with higher gold prices, in short, most especially over extended periods of time. And here in early 2022, the precious metal has again acted as a portfolio hedge in today's crisis, helping offset losses in equities and other risk-on assets amid Russia's assault on a European democracy.
Last Thursday's news of Russia's invasion saw gold prices spike to $1970 per ounce, more than 8% higher for 2022 so far in US Dollar terms, and 10% higher in both Sterling and Euros. Global stock markets, in contrast, have lost over 7% since New Year's Eve on the MSCI World Index. So whatever your thoughts, hopes and fears over Putin's slaughter in Ukraine, rebalancing your investments remains a cold, hard calculation here and now.
Liquidation among existing gold owners remains marginal to date, and – at a guess – any significant pullback in prices is likely to meet solid demand as the geopolitical and economic outlook worsens.
As it is, and compared to the prior 12-month average, gold demand by weight rose 5.9% on BullionVault in February but selling jumped by 60.9%. Together that saw net selling across the month reach 382 kilograms – the most since rising prices spurred liquidation of 775kg in June 2019 – taking the total quantity of gold vaulted and insured in each client's choice of London, New York, Singapore, Toronto or Zurich down by 0.8% to slip below 47 tonnes for the first time since May last year.
Gold's steepest price rise in 3 months meantime saw the number of private investors starting or adding to their personal holdings of vaulted bullion slip by 6.6% in February from January's figure, falling to the fewest since December 2019, eve of China's Covid-19 pandemic going global.
The number of people cutting or quitting their existing gold holdings in contrast jumped by 53.3%, reaching the most in 12 months with the sharpest rise since November 2020's leap of 66.5%, back when gold prices fell hard on Pfizer's vaccine trial results. 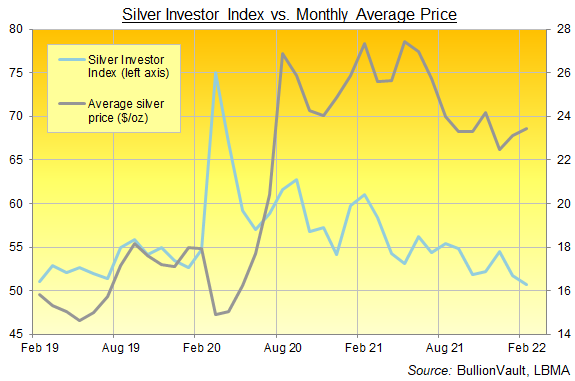 Tracking the number of buyers versus sellers, the Silver Investor Index meantime slipped to its lowest since January 2019 last month, reading 50.7 with a drop of 1.0 point.
Silver demand in contrast held firm overall, balancing investor selling to keep BullionVault clients' total holdings unchanged at a 6-month low of 1,228 tonnes as prices rose to 3-month highs.
Altogether – and with rising platinum prices seeing 90kg of net selling cut client holdings to 2.0 tonnes while the addition of palladium to BullionVault's platform put 24kg onto the Daily Audit of customer holdings – that took the value of clients' precious-metal property up above $3.9 billion, the most May 2021's record at $4.0bn.
So despite the profit-taking, cashing in or rebalancing – whatever you want to call it as Putin murders and terrorizes civilians in the democrat state to his west – total private investment in physical bullion is growing by value. The financial forces underpinning that trend may well accelerate as Russia's violence meets Ukrainian resistance and Western sanctions.
Attachments: