END_OF_DOCUMENT_TOKEN_TO_BE_REPLACED

Number of net gold buyers more than doubles to all-time record at No.1...
As the CORONAVIRUS pandemic reaches what experts hope will prove its peak across Europe and North America, gold investment demand among the general public has never been stronger, says Adrian Ash, director of research at BullionVault.
The world's largest online and smartphone marketplace for precious metals investment, BullionVault first opened in April 2005. Today it cares for more than £2.1 billion (US$2.5bn, €2.3bn, ¥279bn) of gold, silver and platinum for its users, all securely stored and insured in each client's choice of 5 global locations.
In March the number of people buying physical gold using BullionVault more than doubled, jumping 113.9% from February – the fastest month-on-month rise ever seen by the West London-based fintech – to reach a new all-time record.
That saw the Gold Investor Index – BullionVault's unique measure of actual trading behaviour among private investors and savers in physical gold – rise at its fastest rate ever, jumping from 55.1 in February to 65.9 in March.
The index would give a reading of 50.0 if the number of people starting or adding to their gold holdings across the month perfectly matched the number of people cutting or selling all their holding. The Gold Investor Index touched a 10-year low of 49.1 last June, and set its all-time high at 71.7 in September 2011, immediately after the US debt downgrade, Euro crisis and English riots of that summer. 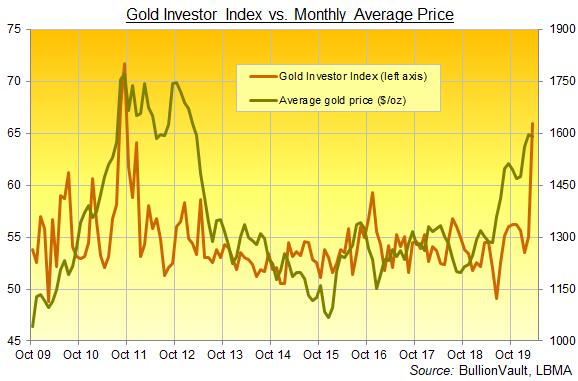 What to make of it all? Says Robert Glynne, CEO here at BullionVault:

"With the economy in lockdown and share prices losing 15% inside a month, it's natural for investors and savers to seek a bolt hole in precious metals. Anyone saying gold has no intrinsic value overlooks its use in all ages and all cultures, as the ultimate store of value.
"Gold may seem productively worthless, but its economic value comes from its ageless social use as a way of preserving purchasing power across time. Physical bullion, unlike a bond or a business, cannot miss a payment or go bust. Nor can it be created at will, unlike government debt or currency."

The surge in new buying was led by a jump in first-time precious metals investors, as the number of new BullionVault users opening an account and starting to buy in March rose 468.4% from the previous 12-month average, reaching its second largest total ever after September 2011.
Choosing to buy gold securely stored in London, New York, Singapore, Toronto or (most popular) Zurich, users of BullionVault hold precious metals in the form of large, wholesale-market bars, buying and selling as little as 1 gram at a time using the fintech pioneer's peer-to-peer platform and smartphone apps for Android and iPhone.
That means BullionVault's users have been able to deal throughout the lockdown so far, because unlike shops selling high-margin gold coins or small bars to the 'retail' public, the wholesale supply-chain has continued to operate with little interruption, most especially in London, heart of the global bullion trade.
In contrast to coin shops forced to shut by a lack of supply – and also now unable to buy back from people wanting to sell their coins by post or in person – BullionVault's technology saw an average of more than £10 million of precious metals (£10.9m, $13.5m, €12.2, ¥1.5bn) change hands every day in March, a new monthly record. 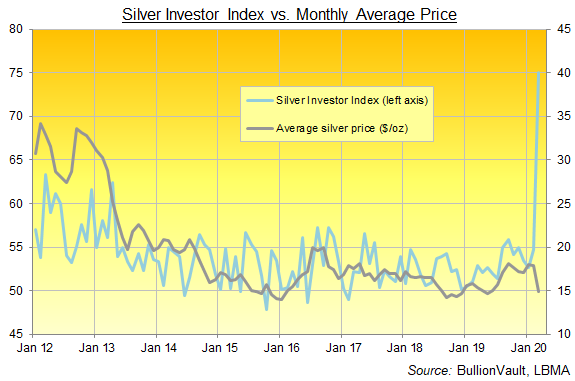 The Silver Investor Index also jumped by a series record in March, leaping to a new all-time high of 75.1 from February's reading of 54.7 as the number of buyers more than tripled.
That surge in the number of buyers – up by 201.4% – came as the price of silver, which unlike 'useless' gold finds three-fifths of its end-user demand from industry, fell at the fastest pace since the Lehman Brothers' crash spurred the late-2008 stockmarket panic and presaged the worst global recession since the 1930s' Great Depression.
Silver demand on BullionVault also set a new monthly record by weight, with net inflows of 97.0 tonnes taking the total stock of the primarily industrial precious metal held for BullionVault users above 930.4 tonnes worth £337m (US$416, €380m, ¥45bn).
Gold demand by weight set its second strongest monthly total, coming just behind March 2009 – depth of the Lehman Brothers' crash phase of the global financial crisis – at 2.0 tonnes, taking total client holdings above 41.1 tonnes worth £1.7bn (US$2.1bn, €1.9bn, ¥230bn).
Demand for platinum – mostly used in diesel engine autocats, and which sank in price by one-third last month before rallying but remaining near its cheapest since 2003 – jumped to boost client holding by 47.4% at 1.4 tonnes worth £27m (US$33m, €30m, ¥3bn).
So what next? As Robert says:

"The ability to trade securely-stored gold 24/7 at wholesale prices, rather than paying the high mark-ups charged on small bars or coins, has attracted new customers at a rate not seen since the very peak of the global financial crisis.
"Of course, we'd much rather this strong demand for precious metals was not caused by today's health and social emergency, but we expect to see elevated demand for gold, silver and platinum to continue as long as the impact of the Coronavirus crisis threatens other assets, such as property and shares."

Technical note: BullionVault's Gold & Silver Investor Index series provide a unique window on private-investor sentiment in physical bullion. For each metal the series show the balance of net buyers over net sellers across the month as a proportion of all owners at the start, rebased to 50.
That means BullionVault's figures complement other gold and silver market data, showing revealed preference – not survey-based 'intentions' – among the world's largest single pool of self-directed bullion investors. For more, see this article in the LBMA's Alchemist magazine.
Attachments: