END_OF_DOCUMENT_TOKEN_TO_BE_REPLACED

GOLD PRICES spiked within $10 of summer 2020's all-time Dollar-price record on Tuesday, leaping through and hold above $2050 per ounce in London trade to set fresh all-time highs in Euros, Swiss Francs and Japanese Yen as industrial and energy commodities supplied by Russia leapt amid US and UK moves to ban its exports in retaliation for President Putin's invasion of Ukraine.
After a second Russian general was reported killed overnight, and with Chechen 'kill squads' apparently angry with Moscow after poor intelligence and support saw them fail 3 times to assassinate Ukraine's President Zelensky, the Wall Street Journal says Russia is recruiting fighters from Syria, "hoping their expertise in urban combat can help take Kyiv."
Due to speak from the White House, US President Joe Biden will announce a Russian oil import ban, claimed the Politico website – also cited by Reuters as the source of news that the UK will embargo Russian crude – "avoiding a fight with Congress and his own party, which was poised to act if he didn't."
A group of 27 foreign-policy "heavyweight" experts have meantime called on the Democrat White House to impose a "limited no-fly zone" above Ukraine, an idea already dismissed by Republican senator Macro Rubio as spelling "World War III".
The gold price in Euros has now gained more than 18% from this time last month to reach €1895 per ounce. 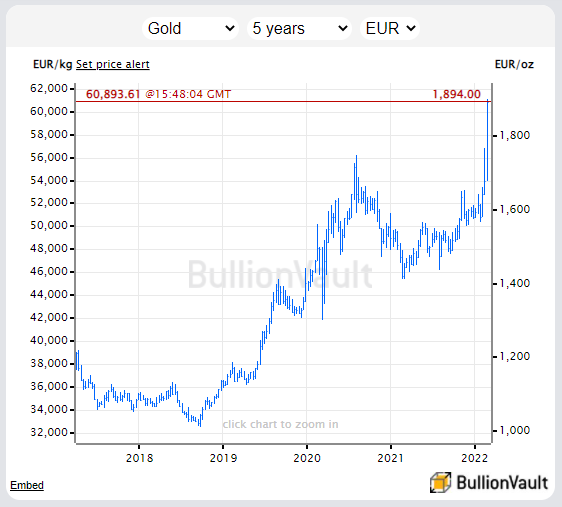 The UK gold price in Pounds per ounce today rose within £5 of its August 2020 peak, reaching £1570 as prices jumped into Tuesday afternoon's London auction – site of the global benchmark for gold prices.
Volumes through Monday's auctions were 13.7% greater than the last 3 months' averages at the 10:30 price of $1999 and 42.1% greater at the 3pm price of $1980.
Natural gas had earlier eased from the last week's 140% jump but crude oil leapt another 7% overnight to hit fresh 2008 highs above $128 per barrel of Brent.
The price of nickel – 10% of which is mined in Russia and with the as-yet-unsanctioned Nornickel (MCX: GMKN) producing up to 1/5th of battery-grade material for electric vehicles – leapt almost 3-fold, jumping above $100,000 per tonne.
Having peaked around $50,000 in spring 2007 and fallen as low as $8,000 at New Year 2016, nickel contracts on the London Metals Exchange today leapt 280% from Monday's close.
"Given further unprecedented price moves in Asian hours this morning, the LME has taken this decision on orderly market grounds," the exchange said in a notice to members.
The Opec oil cartel, led by 'swing' producer Saudi Arabia, last week said it will continue with only "gradual" increases in output after imposing quotas during the Covid pandemic and lockdowns to bolster prices.
"We are ready to [release] as much oil as is needed," said Fatih Birol, head of the International Energy Agency to the Financial Times today, criticizing Opec and adding that last week's release of 60 million barrels from its 31 member nations was only 4% of their total strategic oil reserves.
"[Russian] cargoes have already been rejected by European refiners in the market, because people are afraid sanctions might be coming, and so they don't want to be caught with some cargo they can't resell," ABC quoted one research professor.
Newly-cast Russian gold and silver bars will no longer be acceptable as Good Delivery, the London Bullion Market Association announced Monday, suspending 6 refiners from its approved list "in light of UK/EU/US sanctions and to ensure an orderly market."
But with palladium already leaping this week to fresh all-time highs and finding 40% of its annual mine output from Russia, the London Platinum & Palladium Market said Tuesday it won't yet follow suit, choosing "to monitor and review the situation."
"A bipartisan group of US senators has introduced a bill to impose secondary sanctions to anyone buying or selling Russian gold," says Bloomberg, "an effort to block one of Moscow's remaining possible avenues for offsetting the collapse of its currency" by threatening action against non-US businesses who breach the order.
London-listed oil giant Shell (LON: SHEL) earlier apologized for making a Russian gas and oil deal at the weekend and vowed its intention "to withdraw from its involvement in all Russian hydrocarbons, including crude oil, petroleum products, gas and liquefied natural gas (LNG) in a phased manner, aligned with new government guidance.
"As an immediate first step, the company will stop all spot purchases of Russian crude oil. It will also shut its service stations, aviation fuels and lubricants operations in Russia."
Global energy-related carbon dioxide emissions rose by 6% in 2021, "more than offsetting the previous year’s pandemic-induced decline" to reach 36.3 billion tonnes – the highest ever level – said the IEA in a separate press release Tuesday, pointing to "increased use of coal."