END_OF_DOCUMENT_TOKEN_TO_BE_REPLACED

GOLD PRICES rose for the 11th time in the last 15 sessions in London on Wednesday, moving up through $1911 per ounce as the US Federal Reserve's massive QE bond-buying program threatened to drive overnight interest rates on the Dollar below zero.
Asian stock markets edged higher but Europe fell after the value of US corporations slipped 0.2% yesterday on the S&P500 index following comments from several Federal Reserve policy-makers that the central bank is "talking about talking about" starting to reduce its monthly QE money creation and bond purchases, often known as 'tapering'.
Taper Talk was widely seen driving the historic gold price crash of spring 2013, when the US Fed discussed starting to withdraw some its then-record monetary stimulus following the global financial crisis.
Gold prices last night in contrast jumped up through $1900 in after-hours trade.
The Fed's total asset holdings have now grown by 90% since the Covid Crisis hit Western economies and financial markets in March 2020.
Holding its overnight interest rate at 0% for the 13th month running at end-April's meeting, the Fed again vowed to continue buying at least $80 billion per month of Treasury debt and $40bn of mortgage‑backed securities " until substantial further progress has been made toward the Committee's maximum employment and price stability goals." 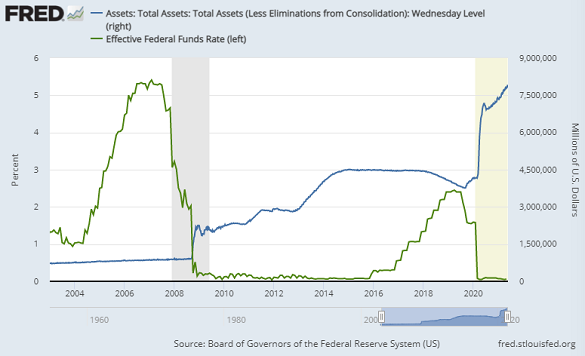 "Key short-term interest rates could actually fall below zero," says Reuters, because the flood of cash on commercial bank balancesheets – caused by the Fed creating money to buy Treasury bonds from them – has created a "glut" of money competing for borrowers.
With the Fed's bond-buying program creating a shortage of 'risk free' government debt investments for financial institutions to hold, volume at the Fed's overnight reverse repo window – effectively a borrower of last resort – surged to $433 billion on Tuesday, data from the New York Fed show, "the third largest uptake ever."
The cost of borrowing overnight money through the Fed Funds system has so far averaged just 0.06% annualized this month, well below the mid-point of the US central bank's 0.00% to 0.25% target range.
"Big picture, this suggests to me that quantitative easing is done and the Fed needs to taper," says one fixed-income trader.
With London gold prices holding at $1905 around Wednesday's 10.30am benchmarking auction, the precious metal has only fixed higher on 58 days in history, 4 of them in January 2021 and the rest between July and November last year.
"Even if inflation is high, the Fed is going to be very, very dovish," Reuters quotes one trader.
"They will continue to keep front-end rates low, which is going to weaken the Dollar. Gold is going to do quite well."
The US Dollar rallied 0.2% on Wednesday after nearing its lowest value against the rest of the world's major currencies since 2014.
The UK gold price in Pounds per ounce rose near 4-month highs at £1350 while the Euro gold price touched €1564, its highest since early January.
Yuan prices in Shanghai had earlier fixed at their highest since early January, helping keep the premium for bullion landed in China – gold's No.1 consumer market – above $11 per ounce, some 20% above the typical incentive for new imports.
New York prices settled last night at $1898 per ounce on the June Comex gold futures contract, with total trading volumes jumping by almost four-fifths from Monday to the most since last Wednesday's 4-month record.
Tuesday's earlier $20 price jump saw no change in the size of the giant SPDR Gold Trust (NYSEArca: GLD), keeping it at 1,046 tonnes – the largest in 9 weeks – while the smaller iShares gold ETF (NYSEArca: IAU) also ended virtually unchanged at 499 tonnes, its largest in 6 weeks.
Silver tracked the gold price's rise and retreat on Wednesday, briefly popping up through $28 per ounce for the 3rd time so far in 2021.