END_OF_DOCUMENT_TOKEN_TO_BE_REPLACED

Switcheroo from end-May's top tip, says this technical analyst...
BACK in May, I told gold investors to ditch their gold for greenbacks, writes Greg Guenthner, holder of the Chartered Market Technician designation, in Addison Wiggin's Daily Reckoning.
At the time, gold was sinking below $1260 for the first time in months. The Dollar looked like it was poised for a major breakout toward its 2013 highs. And virtually no investors were remotely interested in these developments...
Of course, a lack of publicity didn't stop the market forces that were already in play. Gold tripped another 5% and sank toward its lows. And the Dollar exceeded all expectations, rocketing to levels not seen since 2010.
"Just a few weeks ago, many analysts were talking about a potential breakdown in the Dollar," I wrote on May 30th. "But things aren't always as they first appear. Many times, the best trades are the ones you least expect."
But hang on just a minute...
Gold is now enjoying its biggest three-day rally since June. And the Dollar looks a little tired after its big move higher. That means it's time to flip this trade.
More on this idea in just a minute. First, let's check out the recent Dollar rally. Here's what I was seeing in the Dollar index back in May: 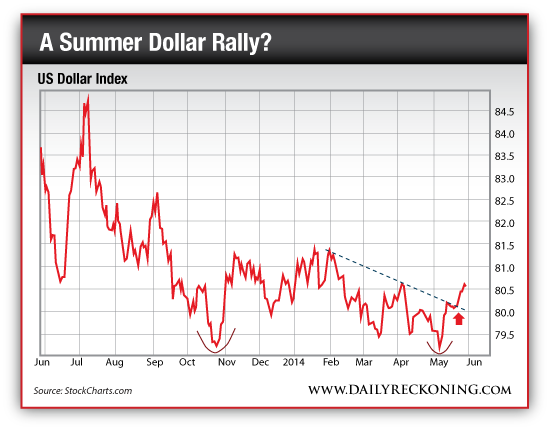 And here's how the move unfolded: 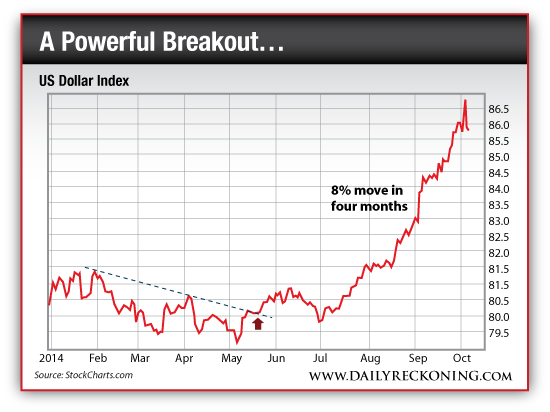 Trading gold for greenbacks was a stellar trade – and for now, it has run its course. The Dollar will need to digest its parabolic move. And gold looks ripe for a quick comeback.
For the record, I think the Dollar's initial move will stick. The Dollar index could very well end up higher six to eight months from now – but the road could get volatile. Also, while gold remains in a bear market, snapback rallies like the one you're seeing right now can offer fantastic opportunities to score quick profits.