END_OF_DOCUMENT_TOKEN_TO_BE_REPLACED

Don't fight the Fed? But what if it loses...?
DON'T FIGHT the Fed they say, writes Adrian Ash, director of research at  BullionVault.
And they have mostly been right for the last half-century at least.
The world's most powerful central bank gets to decide the cost of borrowing the world's most important currency.
So it gets to direct both the amount of borrowing, investment, spending and speculation...
...and also, therefore, the quantity and thus the longer-term value of the Dollar itself.
Or so everyone thinks. Cheerleaders for buying gold most of all. 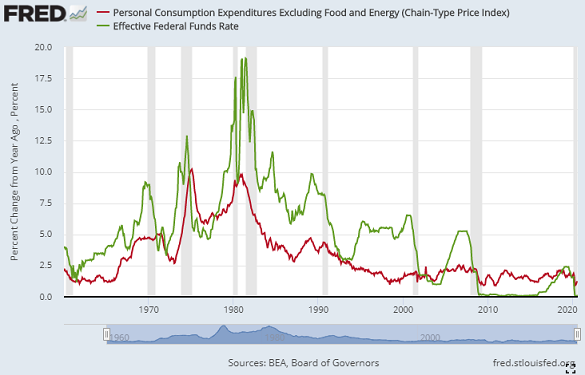 See where the US central bank raised interest rates in the 1970s...
...and hiked all the way to nearly 20% at the start of the '80s...?
Inflation fell back as the cost of borrowing jumped (while gold and silver prices collapsed after their 1970s' surge), enabling the Federal Reserve then to cut rates as growth in the cost of living receded.
Speculation in "inflation trades" also fell back...most dramatically in silver from its $50 top of January 1980...as the Fed ordered commercial banks to pull credit lines and tighten rules for financial loans.
Raising rates (also known as making money 'tighter') worked again in the late 1980s, crushing inflation once more. (Again it also seemed to help cause recession, as marked by those vertical grey bars in the chart above).
But something changed around the turn of the Millennium.
Now, instead of fighting inflation, the Fed found itself facing much slower growth in the cost of living.
You and I might have enjoyed this. We might have found that lower or even negative inflation helped grow our purchasing power, reducing the everyday stress of always needing to find more money just to stand still.
But instead of letting the cost of living flatten out, the Fed turned its fire-power against deflation...
...the evil twin of inflation...
...under which the real value of money goes up, instead of falling...
...knocking a hole in spending and investment and, most ugly of all, growing the real burden of existing debt on households, business and government.
What to do?
Like the Bank of Japan before it...and like pretty much everyone else in its wake...the Fed tried to boost the pace of inflation by using the tools it already thought it knew how to use.
Pull this lever! Turn that dial!
Only this time, push them in the other direction!
Slash rates. Create and spend money on assets. Hand cash to the government, either through the bond market or directly as an overdraft.
Inflation will follow like day follows night...
...and bathed in that warm morning sunshine, the economy will burst into bloom.
Unless it doesn't. 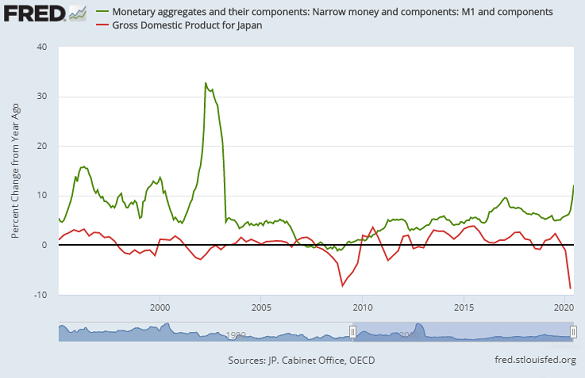 First to suffer a banking bubble and bust back in 1989, Japan also leads the world in demographics (a rapidly ageing society) and deflation.
Tokyo slashed interest rates down to just 0.5% in the mid-1990s, and it started quantitative easing not long after.
Because, with rates as good as zero, the only option left is to create and keep throwing money at deflation...
...buying anything and everything to try and provoke a turnaround in the direction of economy activity...
...spending $165 billion in August alone...
...even though it doesn't seem to work.
"We didn't abandon the aggregates. They abandoned us."
So said one 1980s' central banker, talking about the "monetary aggregates" of M1, M2, M3 and all the rest which used to lead the evening news headlines...
...right up until the practice stopped working theory, and the central-banking profession switched to a new moonshine called "inflation targeting".
Today's US Fed chairman Jerome Powell picked up the story last month in his big speech to the annual Jackson Hole conference.
"By the early 2000s many central banks around the world had adopted a monetary policy framework known as inflation targeting," said the world's most powerful academic economist.
But now, "Our approach could be viewed as a flexible form of average inflation targeting," said the Fed boss...
...updating the world on how the US central bank will fight the Covid Crash and the deflation now showing up everywhere (see the economic data listed below)...
...by saying that, if inflation undershoots his 2.0% annual target for a while, then he is happy to let it run above 2.0% for a while too, just to even things out.
But that 2% level has only been reached 8 times in the last 60 months of data...
...and despite zero rates and massive QE money creation, it hasn't been achieved 75% of the time since the mid-1990s.
So getting above 2% is frankly a pipe-dream given the Fed's current tool box.
To put it more clearly, what Powell meant was that inflation targeting is finished...
...but he hasn't yet got a new theory to replace it.
Maybe that's because the Fed isn't actually in control at all. 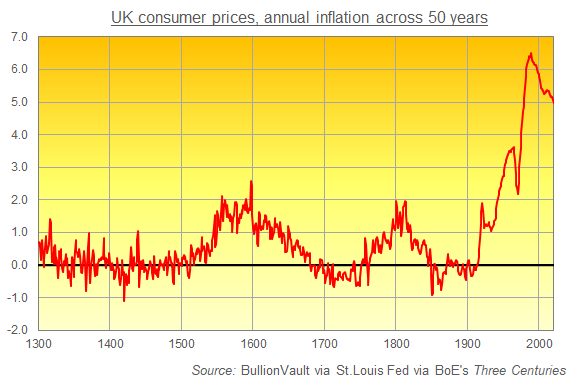 Gold tends to do well, as you know, when other things do badly.
But it does best of all when people lose faith in central banks...
...and right now, central bankers have lost faith in themselves.
That risks a shock to the value of money. Central bankers will hope it forces you, me and everyone else out of cash and into the stock market...or real estate...or making new loans...or borrowing and investing in new ideas and businesses.
It has certainly driven a lot of savers into tech stocks so far. But the rest of the economy still isn't responding. (Apple was briefly worth more than the entire FTSE100 before last week's pullback.)
It has also driven a lot of money into precious metals. Record sums, in fact.
Because don't fight the Fed, right?
"When money dies, the barbarous relic...gold...comes into its own," said the UK's Daily Telegraph this week.
"A rising gold price reflects, above all other things, a loss of trust in the value of fiat currencies."
True. But what if the Fed loses? What if creating inflation...by destroying the value of cash...is harder than anyone born after 1900 can imagine?
Stuck with a fast-ageing, savings-soaked society, Japan hasn't managed to generate inflation in 30 years of slashing rates, printing Yen, and throwing the whole lot into a big pit...dug and then filled with concrete by workers who simply can't find anywhere else to build any more bridges to nowhere.
Sent mad by their impotence, Tokyo's central bankers are now creating money and buying anything and everything that trades with a ticker – the very definition of crazy given that doing the very same thing hasn't produced any different results so far.
Just how crazy might the rest of the world's central bankers become if they suffer the same exhausted collapse?
"We have come to a major break in price systems," commented David Hackett Fischer, author of (among other excellent things) the fantastic history of inflation, The Great Wave, in 2002.
His book looked at the four huge, multi-generational trends of inflation over the last 1,000 years. You can see them in UK consumer prices above.
Each was followed by a period of flattening and even deflation. Except the latest. So far.
"I think we can say [this current switch] probably started in the 1990s," Hackett Fischer went on back in 2002.
"So we are now nearly a decade into a new era" of equilibrium in the cost of living, sweeping the world in the wake of the 20th Century's unprecedented inflation.
Fast forward nearly 2 decades, and after the world tried and (got) abandoned (by) Keynesian spending, monetarism and now inflation targeting, policy makers are increasingly lost...without a map and without a plan.
Their levers and dials no longer work. Maybe they never did! Maybe the world was simply changing anyway.
How crazy might such thoughts drive them? What hare-brained schemes might they rush to apply?
"Of course," said academic central banker Ben Bernanke in his most famous speech – made in 2002, the year Hackett Fischer noted something had changed – about how easy it was to defeat deflation, "the US government is not going to print money and distribute it willy-nilly."
Sure, of course it won't.
Not until it does.
"The idea of Helicopter Money...showering cash onto private households as a gift they can spend at will...is breaking out of the lecture hall just as Keynesianism, monetarism, and inflation targeting did before it," we wrote back in late 2015...
...just as gold prices found what has proved the floor after their post-finacial crisis retreat, starting a new bull market peaking 98.5% higher so far.
But that name – helicopter money – could never stick. Too scary, jokey, transparent.
So how about calling it Modern Monetary Theory instead?
Exactly the carpet-bombing that savers should fear, MMT is fast-gathering followers, fans and practitioners outside the lecture halls, first because the lecture halls are shut thanks to Covid, but more because – after Keynes, monetary aggregates, and now inflation-targeting have abandoned their adherents – the world finds itself short of an 'ism' to explain and pretend it can control the workings of a vital and natural tool: money itself.
You might as well try to control language – boost its supply perhaps, or force people to use more of it, or tell them where and when they can't whisper and must shout.
That's not to say deflation isn't a massive threat, at least as far as policy-makers (real and wannabee) can see. They think it needs unprecedented firepower to defeat it. The nuclear option could soon be upon us.
If your savings survive the blast, good luck. You may need to act fast and often for them to live through the fall-out.