END_OF_DOCUMENT_TOKEN_TO_BE_REPLACED

'Bleak choice' in stocks, cash or bonds drives $442m into physical precious metals...
DEMAND to invest in gold, silver and platinum using BullionVault has totalled nearly half-a-billion dollars over the last 6 months, writes director of research Adrian Ash at the precious metals fintech.
Net of client selling, investing in physical bullion on our peer-to-peer platform – first opened in 2005 – has now topped $442 million (£353m, €397m, ¥46.5bn) since the pandemic reached Europe and North America in March.
Beating the Dollar inflow of July-December 2011 by 13.1%, this record investment into precious metals – combined with the steep rise in prices – has grown the value of BullionVault customers' property by 51.2% to $3.8 billion, all stored in specialist vaults in each client's choice of London, New York, Singapore, Toronto or most popular Zurich.
With governments throwing money at the Covid Crisis as central banks abandon any pretence of wanting to curb inflation, this strong demand to invest in physical bullion looks set to keep growing.
Savers and investors face a bleak choice, caught between a stock market in denial about Covid-19's economic depression or a guaranteed loss of purchasing power from cash and bonds. Precious metals present a clear alternative as a store of value.
Yes, buying physical gold, silver or platinum exposes you to price risk. But unlike finance industry securities or even money itself, these precious metals are free of both inflation and default risk – the twin horrors now threatening capital held outside real assets.
Hence August's new record-high gold prices above $2000 per ounce, while silver jumped at its fastest pace since 1987 – up nearly one-third from July – and platinum prices rose for a 4th month runnning.
Rather than deterring demand to invest however, these gains saw buying rise and selling ease back. 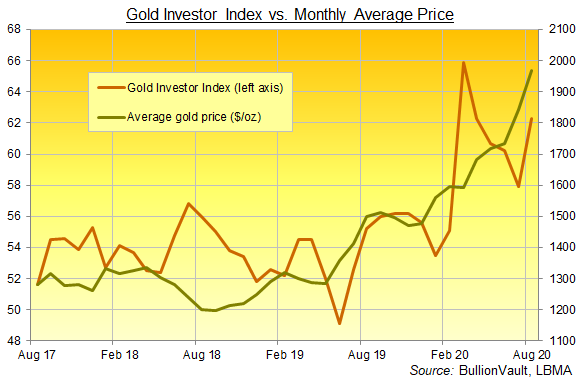 Gold in particular tends to do well when other investments fall, but it does best when people lose confidence in central banks, and today's central bank chiefs have lost faith in themselves.
With US Fed chief Jerome Powell announcing the death of 'inflation targeting' at central banking's annual Jackson Hole summit last month, the number of people starting or adding to their gold investment holdings across August rose 28.0% from July, reaching the 3rd largest figure in our 15 years of business.
The number of gold sellers in contrast fell 17.3% from July's 13-month high.
Together, that saw the Gold Investor Index – which measures the number of people buying investment gold against those choosing to sell the metal – rise from July's dip to 57.9 to reach 62.3 in August.
Up 7.6% for the month – its 3rd sharpest increase of the last half-decade – the index would read 50.0 if the number of buyers equalled the number of sellers exactly.
The Gold Investor Index has only been higher than last month 5 times in its 11-year history, first at the peak of the financial crisis in 2011 and then when the Covid Catastrophe struck in this spring. 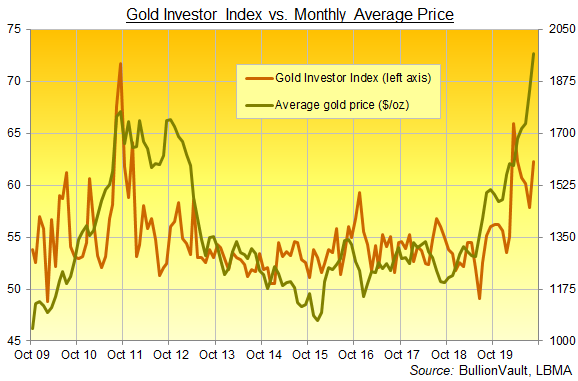 So while July's break of the 2011 peak in gold prices met strong profit-taking, August's strength after the spike above $2000 per ounce saw selling fall back as new demand to invest rose. Sentiment towards gold among private investors would be at a 9-year record if not for March and April's spike.
Gold's month-average price rose 6.8% in August from July, the steepest jump since February 2016 and the 4th fastest gain of the last 10 years. Rising by almost one-third from this time last year (30.3% in US Dollar terms), gold's month-average price has now risen 5 months in a row, its longest run since the middle of 2011.
Net demand for gold totalled 0.6 tonnes on BullionVault in August, 23.3% above the prior 12-month average. That took client holdings of the precious metal to a new lifetime record of 44.5 tonnes, larger by 13.5% so far in 2020, more than all but 45 national central banks hold in reserve, and larger than all but 15 gold-backed ETF trust funds traded on the stock market need to support their shares in issue. 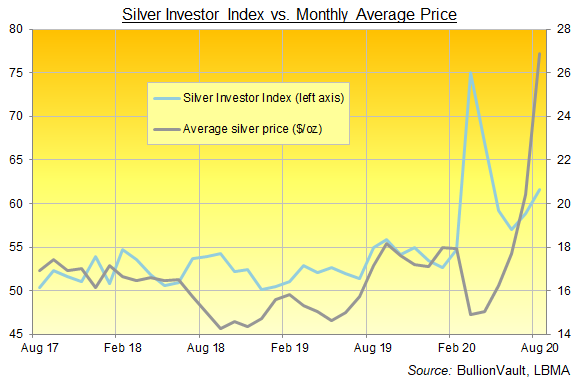 Demand to invest in silver also rebounded in August, again outweighing strong profit-taking even as the price of this more industrially-useful precious metal leapt at the fastest pace in 33 years.
Silver's month-average price jumped 31.8%, the fastest since April 1987, when a low valuation relative to gold and rumours of co-ordinated output cuts from the metal's top 2 mining nations Mexico and Peru spurred a sudden flood of investment demand.
While the number of people starting or adding to their silver holdings rose 10.1% this August from July – reaching the second highest total since BullionVault added the grey metal to its platform in 2009 – the number of silver sellers retreated 8.4% from July's all-time record.
That saw the Silver Investor Index rebound 4.6%, rising from 58.9 in July to 61.6 last month.
Like the silver bullion price, investor sentiment towards the metal would stand at 7-year highs if not for the surge in bargain-hunting spurred by March and April's plunge in the price of this more industrially-useful precious metal.
Silver demand by weight totalled 21.7 tonnes, down 5.1% from the prior 12-month average. That took client holdings to a new lifetime record above 1,063.1 tonnes, up 29.3% so far in 2020.
Together with 62 kilograms of net demand for platinum – 81.9% more than July's inflow, taking total client holdings to a new record of 1.8 tonnes – that saw the value of BullionVault client property reach a fresh record of $3.8 billion (£2.8bn, €3.2bn, ¥400bn), up by 51.2% from 6 months ago (46.1% in GBP, 39.6% in EUR, 46.7% in JPY).
Attachments: