END_OF_DOCUMENT_TOKEN_TO_BE_REPLACED

Metal to beat stocks in 2020...
GOLD will outperform the S&P 500 index in 2020 according to CLSA in its just-released "Global Surprises 2020" report, writes Frank Holmes at US Global Investors.
The Hong Kong investment firm has an impressive track record when it comes to making market predictions – last year it had a 70% hit rate – so it may be prudent to take this one seriously.
Writes CLSA's head of research Shaun Cochran: "If investors are concerned about the role of liquidity in recent equity market strength...gold provides a hedge that could perform across multiple scenarios."
Indeed, gold is one of the most liquid assets in the world with an average daily trading volume of more than $112 billion, according to the World Gold Council (WGC). That far exceeds the Dow Jones Industrial Average's daily volume of approximately $23 billion.
The yellow metal, Cochran adds, can be particularly useful in an era of perpetually loose monetary policy: "[I]n the event that growth disappoints the market's expectations, gold is positively leveraged to the inevitable policy response of lower rates and larger central bank balance sheets."
As I've pointed out many times before, gold has traded inversely with government bond yields. The recent gold rally has largely been driven by the growing pool of negative-yielding government debt around the world, now standing at $13 trillion.
Here in the US, the nominal yield on the 10-year Treasury has remained positive, but when adjusted for inflation, it's recently turned negative, despite a strengthening economy. What's more, the Federal Reserve's balance sheet has begun to increase again. It now holds about 30% of outstanding Treasury debt, up from about 10% prior to the financial crisis. 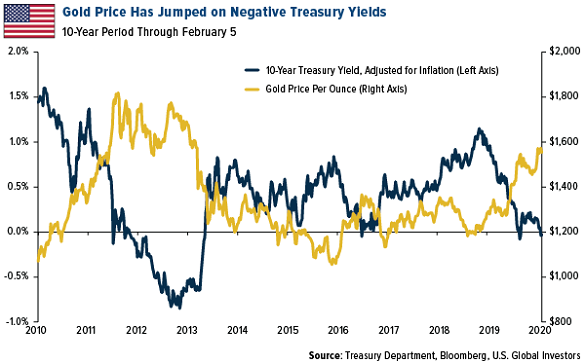