END_OF_DOCUMENT_TOKEN_TO_BE_REPLACED

H1 '21 comes 2nd only to 2020 for 1st-time bullion investing...
The STEEPEST fall in gold bullion prices in 5 years has been seized on by private individuals managing their own investing, writes Adrian Ash at BullionVault.
Demand for securely-stored gold bullion had already doubled in May from April, but it rose another 40.1% in June to total nearly half-a-tonne across the month as self-directed investors trading physical precious metals using our market-leading platform and smartphone apps built new record holdings.
The price of gold held in large, wholesale-market bullion bars fell 7.2% last month in US Dollar terms – the steepest drop since Donald Trump won the White House in November 2016 – but the fall was less marked in Euro or Sterling terms, down 4.9% and 5.0% respectively.
June's price drop was also less marked on a month-average basis, slipping only 1.0% for US Dollar investors to $1834 per ounce.
That marked the highest ever June month-average price.
What's more, a slowdown in the number of new buyers opening an account last month failed to stop the first half of 2021 coming behind only 2020's record for the number of first-time bullion investors. 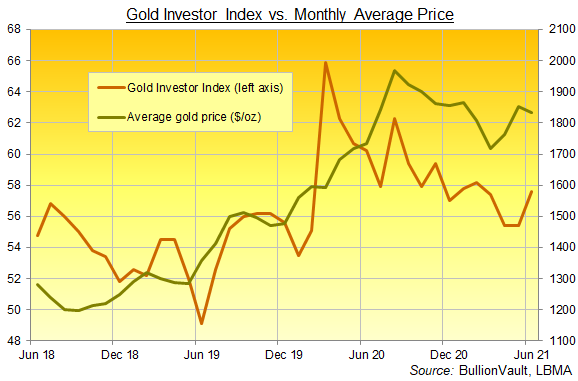 June 2021's price drop saw the fewest BullionVault users choosing to sell gold since December 2019, down 40.1% from the number in May.
The number of gold buyers in contrast rose by 7.1% to reach the most since March's price slump, when the metal fell to its cheapest in 10 months.
Together that pushed the Gold Investor Index – a unique gauge of sentiment based solely on actual trading decisions among BullionVault's client base of 95,000 users, almost 90% of them in Western Europe or North America – up to a 4-month high of 57.6.
A reading of 50.0 would signal a perfect balance of buyers and sellers across the month. The Gold Investor Index hit a 9-year high of 65.9 when the Covid Crisis began in March 2020.
Re-opening has spurred a jump in longer-term inflation fears, and so gold investment demand continues to run very strong rather than receding as mass vaccination marks the beginning of the end for the global Covid crisis.
Gold's long track record of rising when stock markets fall is also boosting its appeal for investors wanting to spread their risk, using this rare, physical asset as portfolio insurance.
Of course, it may seem perverse that this spring's jump in inflation has hit gold prices short term, but that's because it has fueled conjecture that central banks led by the US Fed are about to start reducing QE and raising interest rates, potentially hurting gold as a non-yielding asset.
With economic growth still shakey and inflation already far above the rates offered to cash savings, gold's price drop offers investors a cheaper entry point for a long-term hedge against monetary policy remaining historically weak far into the future.
By weight, and net of customer selling, demand for gold bullion – securely vaulted in each client's choice of London, New York, Singapore, Toronto or most popular Zurich – reached 446 kilograms last month.
That was 124.5% above the last 5-year average, marking the heaviest monthly addition since August 2020 saw the metal set its current all-time record highs above $2000 per ounce.
June's inflow grew the total stock of gold owned by BullionVault users to its 16th fresh monthly record in a row at 47.4 tonnes, worth $2.7 billion (£1.9bn, €2.2bn, ¥297bn) and more than all but 49 national central banks hold in reserve.
That privately-owned stock of bullion is also larger than 119 of the 131 active gold-backed ETF trust funds traded on stock markets worldwide. 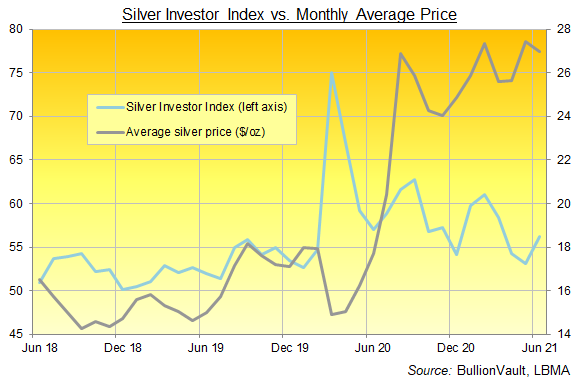 Silver prices fell a little less steeply than gold bullion across June 2021, down 6.7% from the end of May in US Dollar terms and losing 1.8% on a month-average basis.
Even so, silver's month-average of $26.98 per ounce was its highest June level since 2012, almost 52.3% above the same month last year.
Silver demand by weight was the strongest in 4 months, totalling 17.7 tonnes and taking the quantity of silver now owned by BullionVault users to the 11th fresh month-end record in a row at nearly 1,219 tonnes, worth $1.0bn (£728m, €849m, ¥111bn).
The number of silver sellers shrank by 41.7% from May, down to the fewest since March 2020, when the Covid Crash across all industrial and energy markets crushed the grey metal to its cheapest level since New Year 2009 beneath $12 per ounce.
Silver buyers in contrast rose by 5.3% in June 2021 from May to reach a 3-month high.
Together that took the Silver Investor Index up to the highest since March at 56.2, some 3.5 points above its pre-Covid 5-year average.
New interest overall slowed in June, with the number of first-time BullionVault users falling 35.9% from May's count and coming 51.1% below June 2020, down to the smallest monthly addition since December 2019, eve of the global Covid pandemic.
But the first 6 months of 2021 still set the 2nd highest first-half total in BullionVault's 16-year history, coming behind only last year's all-time first-half record and totalling 85.3% more than the last decade's H1 average.
Attachments: