END_OF_DOCUMENT_TOKEN_TO_BE_REPLACED

NOW that gold has broken higher to touch $1450, a six-high year high, the next big test is $1500, reckons Frank Holmes at US Global Investors.

As I've said before, it can do this in the blink of an eye under the right conditions. We may end up seeing those conditions emerge sooner rather than later.

Although he later clarified his comment, claiming he was simply citing research and not forecasting central bank action, the price of gold jumped as much as 2% on the news before closing above $1440 for the first time since May 2013.

Investors took some profits, knocking the price down around 1% after gold started to look overbought a day earlier. The metal was up two standard deviations over the prior 60 trading days, its highest level since April 2016. I would consider each pullback such as this a buying opportunity, though, because I believe the best is yet to come for the metal. 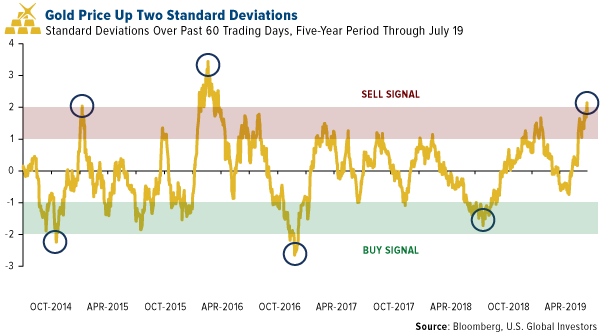 Ray Dalio seems to agree. In a lengthy post on LinkedIn – Dalio's favorite platform for getting the word out – the billionaire hedge fund manager writes that he thinks we're on the verge of a new economic paradigm shift and that central banks' accommodative policies, from low rates to quantitative easing (QE), are unsustainable.

To hedge against this, Dalio says, "I believe that it would be both risk-reducing and return-enhancing to consider adding gold to one's portfolio." Most investors are underweighted in gold, "meaning that if they just wanted to have a better balanced portfolio to reduce risk, they would have more of this sort of asset," he writes.

Select junior and micro-cap gold and precious metal miners also posted very strong growth, mostly on positive drilling results. As for silver, I'm pleased to see that it's finally playing "catch up" to gold, its price having hit a 52-week high after an incredible six straight days of gains. 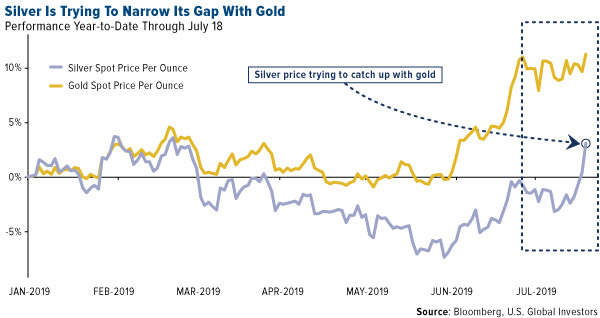 With gold having already broken out of its five-year trading range, is the best still yet to come? I believe it is. And I'm not alone.

"The Fed is getting ready to cut interest rates, which should set in motion a multi-year bear market in the Dollar," write analysts at Alpine Macro in a research note dated June 28. A weaker US Dollar is one of three "key ingredients" for a bull market, according to Alpine Macro, the other two being a more accommodative Fed and rising geopolitical risks.

"The technical break above $1400 an ounce is a positive sign," the firm adds. "New all-time highs for gold should be seen in the coming years."

"The prospect of lower interest rates should support gold investment demand," the World Gold Council (WGC) says in its mid-year outlook. "Our research indicates that the gold price was higher in the 12 months following the end of a tightening cycle. Moreover, historical gold returns are more than twice their long-term average during periods of negative real rates – like the one we are likely to see later this year."

"We continue to see no signs of rate hikes on the horizon over the next several years, and historically have seen gold continue on an upward trajectory beyond the last rate cut," writes CIBC in a note dated July 14.

The bank points out that in two previous gold bull market cycles – in the 1970s and 2000s – negative real rates were the main contributing factor.

"During the last two major periods when real rates stayed below the 2% level and actually ticked into negative territory, the gold price moved over 320% in the 1970s...and approximately 400% from 2004 to peak in 2011."