END_OF_DOCUMENT_TOKEN_TO_BE_REPLACED

Not there yet, says volatility, trader positioning, and relative strength...
GOLD's reversal from $1130 to $1200 combined with sharp rebounds in the gold miner stocks has given precious metals bulls some hope that the bottom may be in, writes Jordan Roy-Byrne at TheDailyGold.
A few weeks ago we noted that the sector was extremely oversold and a snapback rally could begin. Gold has been the tell for the bear market and a real bull market throughout the precious metals complex may not begin until gold's bear has ended. In this editorial we dig deeper into some things to watch as they pertain to gold.
First, a focus on gold's volatility. The chart below shows gold and two volatility indicators: the CBOE volatility index and average true range.
Peaks in daily volatility have coincided with important peaks and troughs in the gold price. Volatility declined from summer 2013 through summer 2014 before perking up as gold declined from $1255 to $1130. Yet both volatility indicators are not close to extremes. 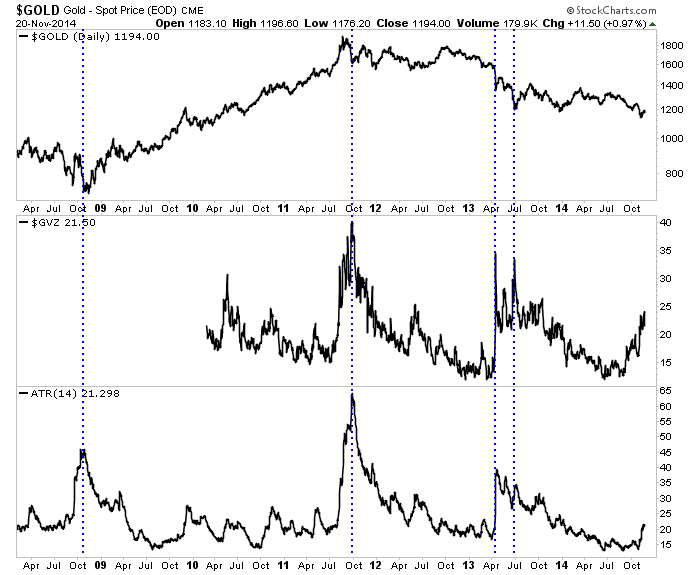 Volatility does not necessarily need to reach an extreme to signal a bottom. However, the two biggest volatility spikes were at the 2008 bottom and 2011 peak. A sharp decline in gold below $1100 towards major support, combined with a spike in volatility, could signal a major turning point.
I'm also focusing on the Commitment of Traders report on gold futures positioning. It's an excellent sentiment indicator. By some metrics (objective and anecdotal) gold's bear market has reached extreme territory. However, the COT is presently not at an extreme. 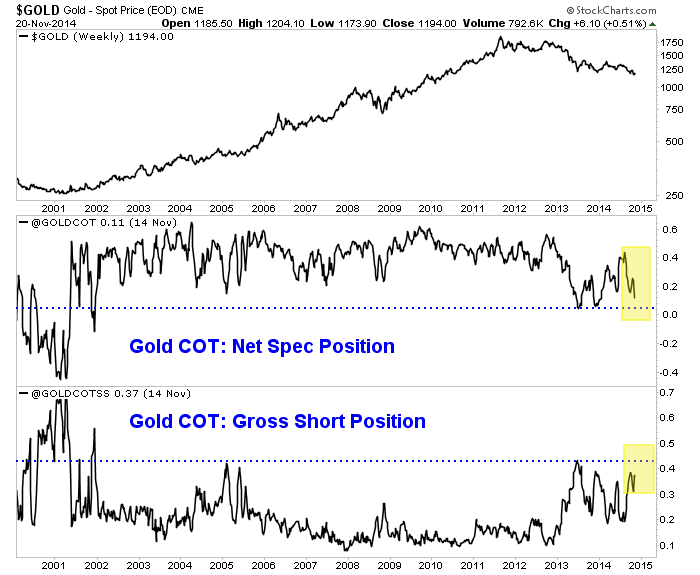 As a percentage of all open contracts, we plot the speculative traders' position twice – first their gross short position (bearish) and their net position (bullish minus bearish contracts). If these readings can exceed the 2013 extremes then they would be at 13-year extremes. A spike in the gross short position, while negative in the short-term, provides future fuel (short covering) for a very strong rebound off the bottom.
Meanwhile, let's not forget gold's relative strength against other asset classes. We've noted before how gold's relative strength tends to perk up before the gold price itself bottoms. The chart below plots gold against a foreign currency basket (the inverse of the US Dollar index) and gold against the S&P500 equity index. 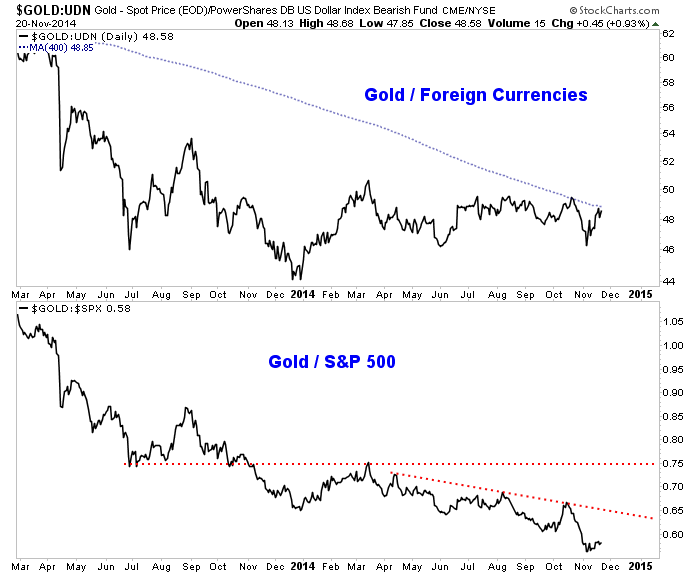 Gold is holding up well against foreign currencies but is coming to an inflection point. I don't think its going to breakout yet but I could be wrong. Meanwhile, gold continues to be very weak against the stock market.
Gold has been the tell for the bear market and my work leads me to believe the bottom is ahead and not behind us. Last week we noted the likelihood of a test of major support near $1000 per ounce rather than a bottom at an arbitrary level. In addition, gold has yet to have a volatility spike on par with the spikes at the 2008 bottom and 2011 top. Moreover, current positioning in the futures market remains below the extremes seen in 2013. Finally, gold has more work to do on the relative strength front before it can sustain a recovery.
All this being said, it is important to keep an open mind to various possibilities. Silver and the mining stocks are totally bombed out and we should pay close attention if they retest their lows. The weeks and months ahead figure to be enticing and exciting for precious metals traders and investors. Expect quite a bit of day to day volatility as we see forced liquidation and occasional short covering. Be patient but be disciplined. As winter beckons we could be looking at a lifetime buying opportunity.